British department store House of Fraser has made its debut in Belfast, Northern Ireland, with a store that could be a key to the beleaguered city's regeneration. 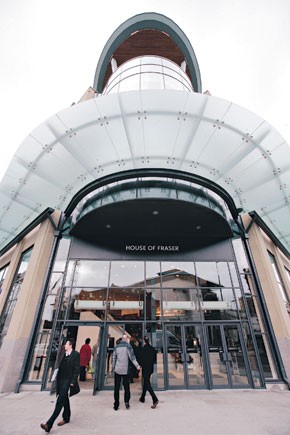 British department store House of Fraser has made its debut in Belfast, Northern Ireland, with a store that could be a key to the beleaguered city’s regeneration.

Victoria Square is widely seen as a major player in the city’s revival, after the Good Friday peace agreement was signed in 1998 with the aim of putting an end to sectarian violence in the region.

“I think the people of Belfast will be blown away,” said John King, chief executive of House of Fraser during a walk-through with press and colleagues from House of Fraser.

“This is the first store opening since House of Fraser was bought by [The Highland Group, a consortium led by Icelandic investment group Baugur Group], and shows our new ideas,” said King. “Our view has always been that we wanted to offer access to premium brands which, previously, shoppers here would have had to go to Glasgow or elsewhere for.”

The store is decked with shiny white walls and floors, which contrast with mirrored and black vinyl panels on the shop’s units.

The company has upped the store’s premium brand content, with shop-in-shop units including an Anya Hindmarch concession with mirrored, Art Deco fixtures and an Agent Provocateur shop-in-shop, along with Aquascutum and Mulberry concessions.

To further bolster House of Fraser’s image, the company has signed model Yasmin Le Bon as its face for spring. She was on hand in Belfast to cut the store’s opening ribbon.

The Highland Group purchased House of Fraser for 351 million pounds, or $706 million at current exchange rates, in 2006.

And while consumer spending may have slowed in Europe in recent months, Colin Porter, commercial director of House of Fraser, said the retailer had no concerns about opening its largest and most high-end store at difficult trading times.

“When times are tough, people either shop up or shop down,” said Porter. “We want to focus on customer service, the customer being a guest and creating a memorable experience.”

House of Fraser has spent 40 million pounds, or $80.7 million, developing the store. While Porter declined to give first-year sales predictions, he said the company was “confident we’ll beat our plans.”

In the store’s first four hours of opening earlier this month, 40,000 customers came through its doors, and House of Fraser said it achieved “record sales” on its first trading day.

Many of Baugur’s fashion brands, including Karen Millen, Warehouse and All Saints, also have concessions in the store, but June Lawlor, director of women’s wear, accessories and beauty at House of Fraser, said the retailer and Baugur’s brands operated as separate entities.

“We will use our Baugur connection to talk to brands — we see the other Baugur brands like cousins and it opens doors to have those relationships with brands,” said Lawlor. “We want to do brands with authority.”

Meanwhile, the company is set to continue its store opening and revamp program. House of Fraser also recently opened a store in High Wycombe, north of London, and in the fall will open units in Bristol’s Cabot Circus development and Westfield’s White City development in London.

Porter said the company’s transactional Web site, which launched in September, would be adding more concessions, and that House of Fraser aimed for the site to eventually be the company’s “number-one store.”