Calvin Klein’s housewarming party brought a diverse group to his Southampton beach abode and a wild night was had by all. 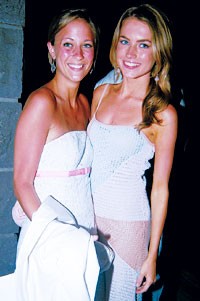 SOUTHAMPTON, N.Y. — Last July, Calvin Klein sprung for a 55,000-square-foot, Hogwarts-like oceanfront fortress on Meadow Lane here for $28.9 million. And, perhaps to honor his one-year anniversary on the 6.7 acres of property, he threw a “housewarming” party for what was rumored to have been around 1,000 guests, but was actually closer to 500. They came from different worlds.

There was the spillover from Denise Rich’s big benefit at her estate, Swan’s Way, most notably, and strangely, Reverend Al Sharpton; there were the art stars, such as Chuck Close and Ross Bleckner; the personalities: Barbara Walters, Martha Stewart, David Geffen and Christie Brinkley; the fashion crowd, of course, including Bruce Weber, Diane von Furstenberg, Steven Klein, Craig McDean and Liya Kebede; a gaggle of Southampton socialites who dipped in for a drink and dipped right back out, and the wild children, such as Bijou Phillips, Casey Johnson and Alexandre von Furstenberg, who crossed paths with their own parents or even brought them along.

Surprisingly enough, Kathy and Rick Hilton had no Hilton kin along for this wild ride. In all likelihood, Paris and Nicky were sorely missed, at least by the 100 buff, glowing and game male and female models bussed in for the event — cast and dressed with the same attention to detail befitting a runway show.

“What is this party for anyway?” asked Olivia Chantecaille, who brought furniture beau Eric Villency and walked around the house agog, like most everyone else.

“Well, I had to have a party here before I tore it down,” said Klein. “And then I’ll have another party when I build it back up again.” The reason Klein decided to rebuild — or, at least, the reason making its way around the party (rumored to have cost $500,000) — is that the King Arthur turrets and the Harry Potter exterior don’t exactly mesh with Klein’s interior makeover.

The perfect antidote to benefit fatigue: a party for a party’s sake. Perhaps that’s what made this evening special, more than even the opportunity to traipse through Klein’s master bedroom and Corbusier-like bath, decorated, like the rest of the house, in the austere and spare Klein aesthetic. There were no products to promote, no red carpet to trudge down, no paid celebrities on hand, no gift bags and no friends to hit up to buy a table.

Upon entering on the arm of a male model, the first step, naturally, was a tour of the property: the choice points of interest being the veranda off Klein’s master bedroom with a stunning view of the beach and the bay; the indoor balcony overlooking the main entrance, where Klein greeted incoming guests, and the caviar table, which, by the evening’s end, had been completely pillaged. (At least one guest mistook the blinis for pancakes, which goes to show that the crowd wasn’t strictly blue blood.)

“Amazing,” said Sharpton as he strolled through one wing of the house. It was his third party of the night. “I’ve never seen anything like it.”

The minimalist, barely furnished estate has been painted mostly white and its floors are cement. Though the bookshelves are stocked with coffee-table tomes and Theodore Roosevelt biographies, the artwork — including several photos and etchings of Klein — remains unhung. Only the dining room, with its Calvin-esque table that seats 26, has the original molding.

Most guests used the evening to urge Klein not to destroy the property, which he has been remodeling for at least a year. But Peggy Siegal was eager to discuss the demolition process. “How much does it cost to tear down?” she said she’d asked Klein a few weeks prior. “And do they do it with explosives? Do they use a wrecking ball?” She said Klein didn’t respond.

The pool area — near the legendary, though now-defunct, shark pit built by a previous owner — didn’t quite ignite until much later in the evening, though Serena Boardman, Fernanda Niven and John Cameron Mitchell mingled there eating perfectly ripe plums and apricots at one time or another.

But the tour de force was the beach. Party planner Robert Isabell strung hundreds of paper lanterns (operated via electrical outlets in the sand) for pink-and-yellow-hued light that matched the sunset, and included such amenities for guests as insect repellent; Old Navy flip-flops; sunscreen; pillows, in case anyone wanted to spend the night; a bonfire, and a clambake. Nina Griscom, who reported a complete run on articulated lobster tchotchkes at her Southampton store, lounged around with her boyfriend, Leo Piraino, after a long day at the office. Lauren Bush, who’s heading off for a semester in Australia to study Aboriginal art, drank the party’s version of Red Bull — Diet Rockstar — and snapped photos of her teenaged sister, Ashley, and her mother, Sharon. “You know, Red Bull speeds you up and vodka slows you down,” big sis advised the giggly 15-year-old. Other guests just stood on the shore’s sidelines transfixed by the waitstaff-models, who seemed to be having as good a time as the invited guests, if not an even better one.

By 1 a.m., Klein’s medieval castle had been transformed into a modern-day frat house. A number of especially resourceful fellows ditched the idea of going back to Manhattan and instead found other places to spend the night.

As the evening came to a close, the crowd got what it was waiting for. A few of the waiters stripped down to their skivvies and jumped into the moat. Even this moment, which any partygoer could have predicted as soon as he saw the pool, didn’t reek of product placement.

“I didn’t see any Calvins,” chuckled one observant guest.