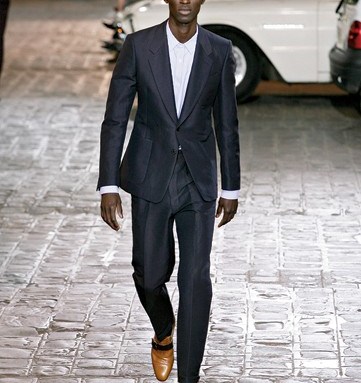 Guys today are more involved in their fashion choices, but as in years past they still seek an efficient retail experience, value for the money, practical styles and trusted brands.

Men are buying more of their own clothes—and are more interested in clothes and the shopping process than some might think—according to the results of DNR’s exclusive survey.

That’s the good news. But in many important respects, guys remain a challenging market for the men’s wear industry to target and service—with practicality, convenience, price, brand familiarity and comfort high on their priorities when it comes to making shopping decisions.

When they choose a store, the most important factor for men isn’t brand selection or even price: It’s a neat and orderly store, with 91 percent of survey respondents saying that is very or somewhat important. “From my days at Louis Boston, we used to call that housekeeping,” says designer Joseph Abboud, who markets his own Jaz collection and is also the creative director for Lord & Taylor’s Black Brown 1826 label. “The selling floor is the face of the store and it provides the first impression to the consumer. It tells a story without a word being spoken, so housekeeping is vital.”

Adds Candace Corlett, president of the consulting firm WSL Strategic Retail: “Guys don’t want to search all over the place. Men have a ‘Let’s just do this’ attitude. We know from our own research that women prefer browsing much more then men.”

While Corlett criticizes some of the housekeeping practices of department stores, that channel does boast a key draw for men: They like to shop a single location and get it over with. More than 80 percent of guys in the DNR survey say it’s very or somewhat important to be able to find everything they need in one store.

“Men are very practical. What that means for retailers is that you have to fulfill their needs then and there, when they are in the store. If you don’t have what they are looking for, they are not coming back later to look again,” says Ari Hoffman, CEO of Gant USA.

Guys shop on fewer occasions than women as well, with 33 percent of men shopping twice a month and 31 percent shopping every few months. Another 17 percent shop only a few times a year, with 16 percent on the opposite end of the spectrum, shopping once a week or more.

“One of the things that jumps out is that guys don’t want a lot of selection. It’s about ‘Let’s keep it simple. Don’t overwhelm me with so much,’” notes Corlett.

“I think it’s important to greet the customer and then leave him alone,” says designer John Bartlett, who is the creative director of Claiborne by John Bartlett and also the owner of a New York store that sells his own line. “For me, shopping is my own private time and I don’t want to be bothered. In my own shop I let them know that I’m there to help them, and then leave them alone. If guys feel pressure, they will leave.”

Still, industry observers caution that guys do need quality service, despite their apparent reservations about asking for it. “At some point a guy will require help,” says Abboud. “I think what that statistic says is ‘Don’t pounce on me.’ But I think sales associates can be trained to read signals from customers and help when it’s warranted and needed. Be present but not overpowering. Nobody wants a self-service section of $1,000 suits. You can’t buy that on your own.”

Men are genetically predisposed to not ask for directions, points out Corlett, only half-joking. “Men in stores often need help desperately, but they don’t want to admit it,” she explains. “When men say they don’t need help, I think they are saying ‘I need help, but I don’t even know what kind of help.’”

“Men don’t have a lot of exposure to food prices, but they really understand mortgage and gas prices,” points out Corlett.

The reliance on sales and discounting has long been an issue for retailers, and Abboud calls it the “stake in the heart” of the industry. “We’ve trained consumers to realize that everything can always be bought on sale. When that’s what the customer is trained to do, it’s very difficult to reverse that,” he laments.

David Wolfe, creative director at The Doneger Group, also notes that this trend can be related to the buy-now, wear-now shopping habits of men, a practice that undermines retailers who stock seasonal merchandise very early. “By the time the weather turns chilly in October and a guy is shopping for a sweater, the fall merchandise has been in the store since July and is already on sale,” he points out. “Shoppers used to shop ahead of time, but that’s not happening now.”

Not only do men seek out sale prices, they also want a flexible return policy, with 50 percent of men in the DNR survey saying that is very important and another 39 percent saying it’s somewhat important. “Maybe that’s related to the male fear of commitment,” quips Bartlett.

Men often don’t like to spend a lot of time in the fitting room, adds Wolfe, meaning they will buy something without trying it on and return it later if it doesn’t fit.

Despite the apparel industry’s newfound commitment to green practices, only 39 percent of men are willing to pay more for environmentally friendly clothes, while 61 percent are not. “I don’t think most people understand the impact that clothing has on the environment,” says Hoffman. “They are not educated about the connection between apparel production and water, for example. I think those numbers might change if there was more education.”

When it comes to influences on shopping decisions, personal contacts are the most important, with 28 percent of men saying they get information on fashion trends from a spouse or partner, and another 23 percent saying friends and family. However, retailers play a very important role as well, with 33 percent of guys mentioning stores and another 18 percent saying windows and displays.

Just 15 percent of the men surveyed say Web sites or online communities influence their shopping decisions and 9 percent say e-mails from stores—and Hoffman thinks that shows room for improvement. “Digital sources still have not become an authority for information about style yet. We have to make some strides there. I think that number will grow,” he says.

Perhaps surprisingly, celebrities are the least potent source of information, with only 4 percent of men listing them as an influence. But that may be because guys don’t like to admit to something they think is considered trivial, Corlett suggests. “I think it’s unknown how influential celebrities are, but a lot of smart marketers think they are very influential because they spend a lot of money on them as endorsers. So I think the power of celebrity is evident,” she says.

Indeed, unlike the well-known protagonist of Sex and the City, only 33 percent of guys say they love wearing designer clothes, versus 44 percent of women. That can be seen when guys are asked what brands they would wear if money were no object. While pricey names like Gucci, Versace, Ralph Lauren and Armani are among the top 10, the list is also filled by brands like Nike, L.L. Bean, Tommy Hilfiger and Levi’s.

“A lot of men just don’t think of themselves as Armani guys. They are identity loyal. They see themselves as a Dockers guy and they are happy with that,” says Wolfe.

Despite the proliferation of business-casual work environments (only 8 percent of men are required to wear suits to work), 69 percent of men say they love wearing tailored clothing. “That’s a very encouraging sign for suits,” notes Wolfe. “I think that number would have been much lower five years ago. I think men are warming up again to the idea of dressing up and looking more polished.”

Perhaps surprisingly, when asked to describe their personal style, only 6 percent of guys describe themselves as preppy, even though that has been one of the biggest trends in the men’s wear market in recent seasons. “I think that’s because guys imagine preppy as the green pants, pink shirt and red blazer look,” says Hoffman, whose Gant brand is a storied purveyor of preppy style. “Even I don’t want to dress like that. We’re trying to create a more cosmopolitan version of preppy.”

But the most controversial question in the survey may be what guys think of pleated pants. Like Obama versus McCain, the polarizing design detail has men evenly split, with half the country loving pleats and the other half hating them.

“What’s funny is that it’s a bit of the dog chasing its own tail,” notes Abboud. “In five years those two segments will flip: The pleated-pant guy will be wearing flat-fronts and vice versa. It’s a bit of the theater of the absurd.”

Which, in a way, is a perfect microcosm of the fashion industry—and what keeps things interesting.