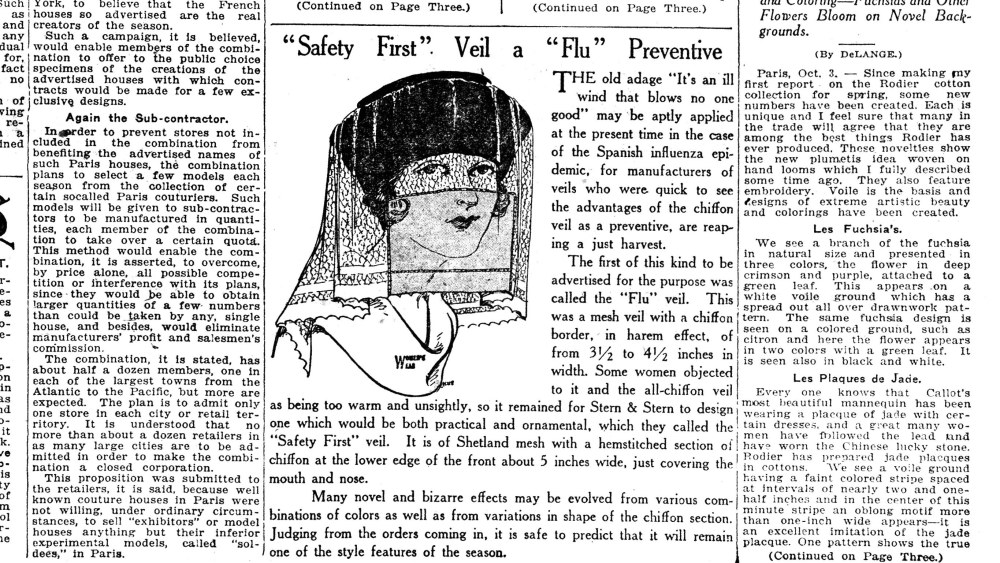 In the spring of 1918, World War I had already been raging for four years when the Spanish flu pandemic started its deadly sweep, eventually infecting 500 million, or about a third of the world’s population at the time. Schools, theaters and churches were closed and public told to stay home.

In the retail industry, there were eerie echoes from today’s coronavirus pandemic, according to WWD archives.

From Syracuse, N.Y., to Idaho Falls, Idaho, some stores were shut, while others limited hours and crowd capacity, or encouraged phone orders. Merchants discouraged exchanges and returns to limit transmission.

Wearing face masks in public was encouraged by health officials (in some places required, with the threat of a $5 fine for noncompliance). “With business at a standstill, the staffs at the large stores have taken to making the masks,” according to an Oct. 28, 1918 WWD report about San Francisco. In Kansas City, Mo., Adler’s made gauze “anti-influenza masks” for their sales staff, available for purchase by the public for 5 cents a piece.

Through the fall of 1918, sales of blankets, comforters and winter underwear (a precursor to today’s stay-at-home ath-leisure?) were up, while sales of ready-to-wear and children’s wear were hard hit. (Many mothers were afraid to take their children to stores.) Suit sales also dropped.

“I heartily favor a woman wearing a heavy chiffon veil all the time she is on the street. It may become necessary to order everyone in New York to adopt this measure. These veils are very thick and would serve as an almost absolute preventative. Let’s forget style and stop this epidemic,” said New York Health Commissioner Royal S. Copeland, according to the Oct. 16, 1918 edition of WWD. “The veils being chosen take on the color of the hat,” the paper reported the same week of the styling preference. Another product, the Safety First Veil, was designed by Stern & Stern, “a mesh veil with a chiffon border in harem effect,” not unlike today’s face shields.

“It had been fashionable to wear veils during the Victorian period and the Edwardian era. The very large hats were often secured to the head with veils. But they had gone out when the bigger hats started to shrink down and particularly during WWI,” said fashion historian Kevin Jones, curator of the Fashion Institute of Design and Merchandising Museum and Galleries, noting that wearing gloves was still part of men’s and women’s etiquette at the time of the pandemic. “The generation that lived through the Spanish flu had come out of veiling, but picked it up again…it became a perfect excuse to also be able to cover your face.”