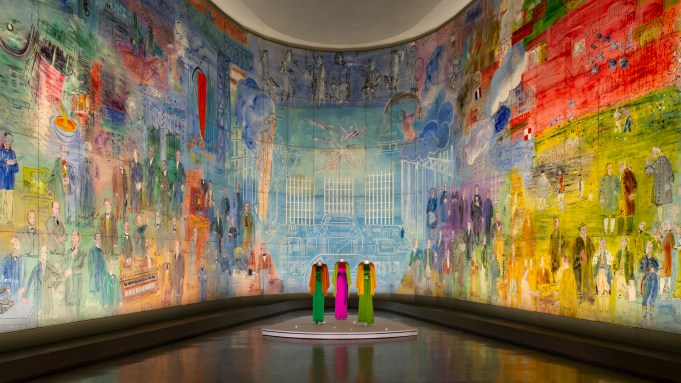 PARIS — To celebrate the 60th anniversary of the house of Yves Saint Laurent, the late couturier’s creations are on display at six major Paris museums alongside some of the artworks that inspired them.

“We were able to create a real team — the equivalent of Paris Saint Germain,” said Madison Cox, president of the Fondation Pierre Bergé-Yves Saint Laurent, comparing the lineup of top institutions to the French soccer club, whose star players include Lionel Messi, Kylian Mbappé and Neymar.

So how best to tackle the sprawling show, which is designed to cast a spotlight on the couturier’s relationship with art, in addition to highlighting the permanent collections of the participating museums?

There’s no combined ticket for the exhibition, meaning that visitors must pay individual entrance fees ranging from 10 euros at full price for the Yves Saint Laurent Museum to 17 euros for the Louvre. Access to the Museum of Modern Art’s permanent collections is free, with a suggested donation of 5 euros.

Otherwise, a Paris Museum Pass, costing between 52 euros for two days and 78 euros for six days, provides access to four out of the six institutions.

“The idea of the project is that there is no beginning and no end. You can do the whole itinerary and visit all the museums, like an archipelago, or you can visit just one museum. Each venue has a very precise theme,” said Mouna Mekouar, the curator who devised the format of the exhibition.

The Centre Pompidou is arguably the main event, with 13 pairings of Saint Laurent’s original designs with works of art by the likes of Henri Matisse, Pablo Picasso and Fernand Léger, as well as a show of Polaroids of models taken during runway fittings. It marks the first time the contemporary art museum has showcased fashion.

“There is no longer any debate about fashion’s place in the museum,” said Laurent Le Bon, director of the Centre Pompidou, noting that from its inception in the 1970s, it was a pioneer in welcoming all forms of design alongside art.

“We place as much emphasis on a masterpiece by Yves Saint Laurent as on an etching by Picasso. What people are interested in today is emotion, quite simply — especially after the pandemic. This is a feel-good show, in the best sense of the term,” he added.

The Pompidou has a historic link with Saint Laurent, having hosted his farewell show in 2002 following his retirement at the age of 65. It’s home to paintings that directly inspired his work, such as a Mondrian from 1937 that’s been juxtaposed with one of the couturier’s Homage à Piet Mondrian dresses from 1965.

Marie Sarré, assistant curator of the Centre Pompidou, said the museum hopes to attract new audiences with the project.

“Our visitors come mainly from Paris. They’re very faithful and often come for the temporary exhibitions, but less so for the permanent collections, which they feel they know already. So one of the aims of this project is to make them come back,” she said.

“We’re also hoping it will bring in visitors who are interested in fashion and who may view the museum as a very different world, even though there are a lot of bridges there,” Sarré added.

For sheer splendor, it’s hard to beat the Louvre Museum exhibit, held in the ornate Galerie d’Apollon, which served as the model for the Hall of Mirrors at the Palace of Versailles and is home to the museum’s collection of French crown jewels and other decorative objects.

Some of Saint Laurent’s most spectacular embroidered jackets, including an organza design from 1990 embroidered with gold and rock crystal, can be viewed in protective display cases, just feet from priceless jewels, such as a bodice brooch that belonged to Empress Eugénie, wife of Napoleon III, featuring 2,438 brilliant-cut diamonds and 196 rose-cut diamonds.

“It’s another form of dialogue, but we know that Saint Laurent collected this type of object,” said Laurence des Cars, director of the Louvre Museum. “He had a great passion for these pieces, which make up a kind of cabinet of curiosities, as well as precious stones.”

The display also features the oversize heart-shaped costume jewelry brooch that Saint Laurent liked to pin on his favorite model each season.

The exhibit at the Musée d’Orsay likewise takes advantage of a unique location, the fifth-floor room dominated by an oversize clock face. In front of a sheer fabric screen, designed to protect the fragile clothes from daylight, its display highlights the link between the designer and author Marcel Proust, to coincide with this year’s centenary of the writer’s death.

It features two costumes for the Proust Ball hosted by Baroness Marie-Hélène de Rothschild and her husband Guy in 1971. Saint Laurent dressed the hostess, in addition to actress Jane Birkin, in ivory-colored dresses inspired by characters from Proust’s novels. These are shown alongside variations of his signature tuxedo, known as Le Smoking.

For Christophe Leribault, director of the Musée d’Orsay, it was only right to give visitors an insight into a designer who was continuously inspired by art. “In a museum, you need surprises, things that are a little unexpected,” he reasoned.

The Paris Museum of Modern Art offers the best value, with a series of colorful and graphic tableaux that can be viewed for free. Jewel-colored satin evening dresses and jackets, dating from the ’90s, are shown against the monumental backdrop of Raoul Dufy’s “The Electricity Fairy,” a vibrant room-sized work originally created for the 1937 World’s Fair.

The exhibition will also guide visitors toward the Matisse Room, home to the panel-sized paintings “The Unfinished Dance” and “The Dance of Paris,” as well as Daniel Buren’s striped paintings.

Saint Laurent’s 1930s-influenced costume designs for French actress Anny Duperey in the Alain Resnais film “Stavisky” are set off by a wall of gold lacquered panels created by Jean Dunand in 1935 for the first-class smoking lounge of the Normandie ocean liner.

Picasso continuously inspired Saint Laurent, who dedicated an entire collection to the Spanish master in 1979. The Picasso Museum’s exhibit includes a jacket inspired by a portrait of Nusch Éluard, the two displayed side by side in a striking confrontation. It’s hard in this context not to view Saint Laurent’s embroidered Picasso jackets as three-dimensional works of art.

The only location that is not showcasing any clothes is the Yves Saint Laurent Museum itself. Cox, Mekouar and fellow curator Stephan Janson chose instead to focus on the work process, displaying sketches for the 300 outfits featured in Saint Laurent’s final couture show at the Pompidou in 2002, alongside patterns, embroidery samples and the canvas “toiles” that serve as practice runs for the final outfit.

“We tried to show the love and importance he gave to his work, his obsession with drawing, but also the importance of his workshops,” said Mekouar. “It’s deeply moving to see the love and devotion that each of the workshops put into creating a toile or a pattern — these objects that weren’t designed to be shown, but merely used as work tools, but which are really interesting when you consider how we work today.”