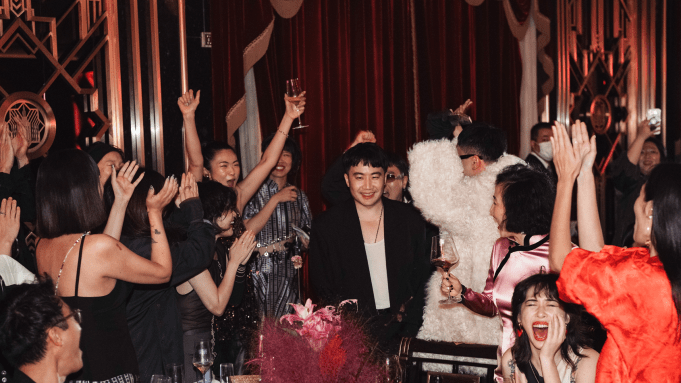 Yang, a Central Saint Martins-educated designer known for his elegant and relaxed interpretations of traditional Chinese dress codes, walked away with the largest prize money of 500,000 renminbi, or $77,600, while the other four honorees were each awarded 150,000 renminbi, or $23,300.

The event was organized by the influential Shanghai boutique Le Monde De SHC for the first time this year and sponsored by H&M to support the fast-rising, next generation of Chinese fashion talent. Around 150 guests gathered for a gala dinner held at Shanghai’s historic Paramount ballroom to see the winners.

“I’m really excited about this prize,” said Yang. “We already work with LMDS. Eric Young has been very supportive. He came to my showroom first and had very precise opinions. Later on I realized it was exactly the right channel and the right audience I’ve been looking to approach. The audience has a certain level of fashion and certain level of culture as well. That to me was a turning point — when LMDS began to exist and picked up a selection of my brand.”

Yang started his brand in 2015 and has presented 11 seasons, with the most recent collection shown last week in Shanghai. “I always imagine a woman that has an Asian face but she’s global, she has fluidity…someone who enjoys herself,” the designer said.

“I hope that the prize can help give China a voice and it can represent something fresh,” said Eric Young, founder of LMDS and the HFF Prize. He also shared he hopes to continue with the event annually and widen its scope.

“Actually in the future, we won’t necessarily just accept Chinese designers, but will look more to see if you are a brand relevant to the China market,” said Young.

There were 13 finalists in the running this year. Although there are 15 possible spots, Windowsen and Soft Mountains were nominated in two categories. Unlike most other fashion prizes, the HFF invites the public to vote for each category along with industry judges. Nearly 30,000 votes were received and those formed 15 percent of each designer’s score.

The New Forward Prize, which goes to a designer who presented their first collection within the last year, went to Louis Shengtao Chen, a Chongqing-based designer, who has put out two collections thus far.

Julio Ng, a prize juror and director at Seiya Nakamura 2.24, called Chen’s work “a universe that deserves to present to an international stage and to make everyone’s life a little more poetic and glamorous.”

The China Forward Prize, which scouts for the innovative combination of traditional Chinese aesthetic and contemporary design, went to Penultimate’s Xiang Gao, who formerly trained under Raf Simons at Calvin Klein.

The ACC Forward Prize, which awards accessories brands, went to Soft Mountains, a contemporary jewelry label created by Long Ziwei, who is of Nuosu background, a Chinese ethnic minority, and a graduate of the London College of Fashion.

“She really goes into the tribes of inland China and in that area we have a rich resource of techniques how to make clothing, embroidery and jewelry,” said Jojo Qian, another prize juror and founder of creative agency, Pink Studio. “She’s very close with the local workers and they work out new ways to make more contemporary jewelry which is derived from the Miao ethnic group.”

The Sustainability Award went to Von Project and the Wushuiyuntai Miao embroidery workshop. Von Project was set up in 2019 by Wang Yunan, who partners with local artisans in Guizhou to incorporate their dyeing, brocade and embroidery techniques into modern designs.

“We were just blown away with, for her, it’s a lifestyle,” said Andreas Lowenstam, H&M China’s men’s wear BU responsible. “What she’s doing when it comes to the resources, the production, the close work with, you can’t say even that it’s suppliers because it’s on such a small scale. She’s very forefront and we know she’s going to inspire the entire industry and it doesn’t necessarily need to be big business to be inspiring.”

The night began with a designer showcase featuring work from a range of young Chinese designers that encompassed the finalists but also others like Victor Wang, Rui and Yueqi Qi. Dinner was interspersed with performances including an acrobatic troupe, plate spinners, drag queens and singers who belted out old Teresa Teng tunes.

Trophies for the HFF Prize were designed to look like the Yangtze finless porpoise, an animal that migrates between the East China Sea and the Yangtze River, a metaphor for this cohort of designers that go between China and the world.