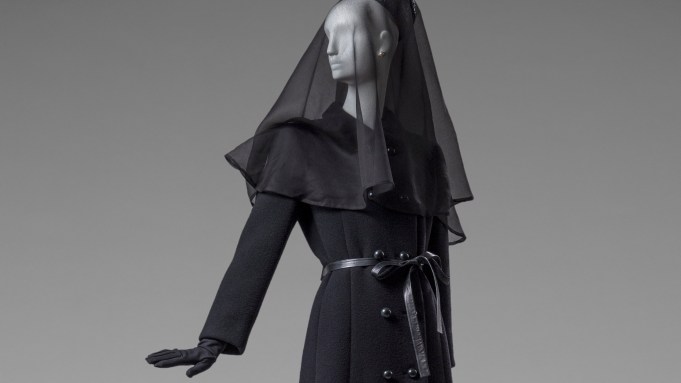 CALAIS, France — “Mine is one of the most beautiful professions in fashion: Making others happy with an idea,” Hubert de Givenchy declared here on Friday at the opening of an exhibition dedicated to the couturier’s career.

“I am happy because I did the job I dreamt of as a child,” the 90-year-old said at a press conference, where he offered recollections about his professional and personal relationships with some of his prominent clients,  as well as the lifelong object of his admiration and respect, Cristóbal Balenciaga.

“Hubert de Givenchy,” scheduled to run until the end of  the year, is housed at the Museum of Lace and Fashion in Calais, the capital of France’s historic lace manufacturing region.

The exhibition spans more than 80 costumes and accessories drawn from private collections; the archives of the Givenchy fashion house; other institutions such as the Palais Galliera and Cristóbal Balenciaga museums, and the lace museum’s own collections.

Shazia Boucher, cocurator of the exhibition, said the designer’s work was driven chiefly by his love of fabric and his admiration of the feminine form, which he thought needed to be equally respected in each design. Givenchy was known as the rare couturier who would visit factories to keep fully abreast of textile development, as well as do personal house calls for his clients.

His love of textiles — from modest calico to opulent furs and even man-made fabrics — results in a focus on textural play throughout the exhibition, which is divided into thematic sections that feature a selection of day clothes, accessories and eveningwear richly decorated with feathers, sequins, beads, fringes and even vinyl. “I created styles for the fabrics I chose,” he explained to the press corps.

“This is the couturier’s outlook on his own career,” Boucher said during a preview, explaining that the friendships that forged his identity was a reflection of his deep involvement in each step, from selection to styling.

“[Hubert de Givenchy] is a very modest man, and is loath to speak of himself,” said Eloy Martínez de la Pera Celada, cocurator of the exhibition. “He often says that if he can cut a good pattern, it is thanks to Balenciaga; if he can drape, thanks to Madame Grès. He references his mentors freely and often.”

The museum’s focus on lace manufacturing helped cinch the couturier’s agreement to mount the show. “His maternal grandfather managed the tapestry manufactures des Gobelins and of Beauvais, and craftsmanship is important to him,” said de la Pera Celada, who has worked with Givenchy on previous exhibitions, including several on Balenciaga.

“To this day, I remain fascinated by the design and creation of lace,” de Givenchy said. “I have used much lace in my career, although never as well as [Cristobal] Balenciaga, who was the king, the emperor of lace, who knew how to [really] use it in harmony.”

“Givenchy is well-known to the larger public for iconic designs or perfume, but it was important to highlight Mr. de Givenchy’s full contribution to fashion,” said museum director Anne-Claire Laronde. The exhibition had been discussed since the museum’s opening in 2013, and showcases some of the 60 Givenchy designs recently donated by collector and designer Dominique Sirop, a one-time collaborator of the couturier’s.

Starting with a copy of the Bettina blouse — faithfully reproduced from the original pattern — from Givenchy’s 1952 breakthrough collection and ending with a trio of bridal gowns, the designs on display include the Duchess of Windsor’s mourning coat, a gown created for French midcentury model-du-jour Capucine — a 1952 photograph published in defunct lace trade publication Arachné failed to name Givenchy as its designer — as well as scores of creations for clients and friends such as Audrey Hepburn and Jackie Kennedy.

A further section focuses on three of these professional relationships-turned-friendships, showcasing outfits for the Duchess of Windsor, Jackie Kennedy’s opera gown from her 1961 state visit to France and designs for Hepburn.

Enclosed in mirrors, one exhibit focuses on two iconic Hepburn outfits: The evening dress from the 1961 film “Breakfast at Tiffany’s” and the lace cocktail outfit from 1966’s “How to Steal a Million.”

Another section highlights Givenchy’s love of art, and the colorful designs inspired by artists such as Nicolas de Staël, Joan Miró and Sonia Delaunay. Several tableaux feature cocktail-appropriate daywear and richly decorated eveningwear, hinting at a Soulages-like appreciation for black.

The final section is dedicated to bridal gowns, the finale of any couture show. A wall of hats that closes the exhibit reminds the viewer of the opinion shared by the designer and Balenciaga that hats punctuate an outfit.

Three installations about perfume are dotted throughout the show, focusing on scents created under Givenchy’s tenure such as L’Interdit, created for Hepburn and the first perfume to use a celebrity for its promotional imagery.

“Before Audrey [Hepburn], there was Jacqueline [Kennedy],” he said, whom he met in the 1950 when she was still Jacqueline Bouvier and a young journalist in Paris, and who continued to be a client when she married John Fitzgerald Kennedy. “She was a very modern woman,” he reminisced. “[After her husband’s election], she still came but very discreetly because the United States [wasn’t] too fond of the idea of their First Lady being dressed by a French couturier.” For her 1961 state visit, “an hour before she left to meet the General [de Gaulle, France’s then-president] in Versailles, we received a call from her private secretary to let us know we were dressing her for the duration of her visit,” he recalled. “But we couldn’t peep a word to the press.

“You all know the story of my meeting with Audrey [Hepburn],” he noted with humor, referencing his expectation of Katharine Hepburn and his meeting with Audrey instead. “She arrived in my life in adorable manner, to ask me to make clothes for her movie ‘Sabrina.’ From the moment I met her to the moment she left us, we had a beautiful friendship but we also worked with joy with an exceptional person.”

Highlighted through the exhibition and in his own words is the importance of collaboration. “Be it the petites main or the première d’atelier, [each design] is the work of a team,” he said.

While he admitted to not following current industry affairs much, he wished for “new blood bringing fresh ideas, and for [fashion to truly] understand there had been a change in epoch. The times demand easy things,” he said, noting that fashion is no longer the deeply codified art form of his time. “The challenge is to find that easy in a chic, harmonious and elegant way.”

As a conclusion, “every time I considered stopping, something came up,” he said.

Born Hubert James Marcel Taffin de Givenchy in a family of Protestant nobility in northern France, Givenchy came to fashion through the work of Balenciaga, which he discovered as a child in magazines. Despite familial disapproval, he went on to work for designers Jacques Fath, Lucien Lelong and Elsa Schiaparelli before launching his own house in 1952.

LVMH Moët Hennessy Louis Vuitton took a stake in the house in 1988 and Givenchy remained at the design helm until his retirement in 1995. Succeeding him were John Galliano, Alexander McQueen, Julien MacDonald and most recently Riccardo Tisci, who held the position for 12 years but stepped down last January. His successor, Clare Waight Keller, will show her first designs for the house in October.

A collective exhibition focusing on contemporary creation and couture, titled “Haute Dentelle,” is planned for 2018, ahead of the creation of a permanent fashion exhibit.