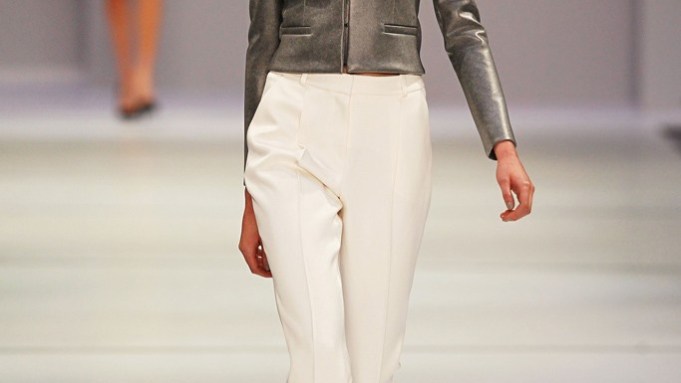 Now celebrating its 20th anniversary, Hugo — the bad boy and cheeky girl brand from German giant Hugo Boss — finally got their guys and gals together. While they share the same runway, it’s usually hard to imagine them cavorting anywhere else. Until now.  “They’re the same kind of people,” said men’s designer Bart de Backer.

For men, de Backer built the brand’s trim tailored silhouette in, rather than up. A number of square or otherwise geometric shoulder insets, along with pocket treatments, abbreviated back belts and double lapels crisply delineated the lines of town coats, city vests, squared-off biker jackets and this season’s four-, three- and a rather low two-button tailored jacket. Trousers were invariably narrow, some with ultra-wide cuffs and others with wide leather yokes. But the most unusual element was a large pouch-cum-pocket attached to an abbreviated half belt on one coat, which de Backer said was derived from 19th century men’s wear.