Hunting the Next Hot Trend

LOS ANGELES — The next big thing in denim might be found in the jungle or in unusual design collaborations — or it could just come out of the wash.

From the bell-bottoms of the Sixties and designer jeans of the Seventies to the...

By Nola Sarkisian-Miller on May 26, 2005
View Slideshow 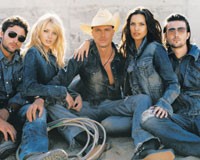 LOS ANGELES — The next big thing in denim might be found in the jungle or in unusual design collaborations — or it could just come out of the wash.

From the bell-bottoms of the Sixties and designer jeans of the Seventies to the stonewashing of the Eighties and the low-rise styles of the late Nineties, one major trend has led to peak cycles in the jeans market. While jeans have been a staple of the American wardrobe for half a century, the periods between the peaks are a time of concern. Supply and demand kicks in, markdowns ensue and the bottom line gets frayed.

So the search for the next hot trend in jeans is on.

For some premium denim players looking to break out of the mold, the metamorphosis requires more than tweaking the back pockets. Denim designers today are adopting an artisanal approach to their craft, elevating the product and its price to a bespoke garment or enhancing its appeal by collaborating with fellow contemporaries.

“Exclusivity and a high price point can create a strong image for the brand,” said Philippe Naouri, co-designer of Antik Denim.

Antik has already raised the industry bar with its artfully constructed, oversized back pockets. Its product has broken the $300 retail barrier. Now it plans to launch its Antik Museum collection, with retail price points hitting $1,000. Fabrics such as leather, python, crocodile and vintage scarves will accent and trim the styles, made from superpremium denim averaging $120 per yard, Naouri said.

Heightening demand, he said, is the limited offering — about 120 pieces per style — and exclusive distribution at Antik’s new 3,500-square-foot store opening on Melrose Avenue here on July 1.

Collaborations have emerged as another way to add a twist to denim designs, a model championed by graphic designers and streetwear labels, such as RVCA, as well as couture brands, such as the much-heralded pairing between Louis Vuitton and Japanese painter Takashi Murakami.

Levi Strauss Co. has worked with artists such as Mark Gonzales and Shephard Fairey for customized product. Seven For All Mankind has joined forces with Swarovski and Great China Wall for limited-edition designs and plans to scale new heights with its cobranding initiatives. The label is in talks with Zac Posen for its next installment, said Tim Kaeding, Seven’s design director.

“They have been tremendously successful and allows us to work with non-denim-oriented companies to create a unique perspective,” said Kaeding, who also served a stint as head designer at Gap Inc.

Even boutique denim firms are entertaining the idea.

Farmer Industry, known for its dead-stock jeans, has designed a style in tandem with girly contemporary label Mon Petit Oiseau. Features of both lines are visible on the rigid jean, from Farmer’s dual-fanged pocket embroidery to the placement of Mon Petit Oiseau’s signature bird.

Atrium in New York and Los Angeles-area boutiques such as Lisa Kline, Hillary Rush and the Kids Are Alright are among the retailers that have picked up the limited piece — only 1,000 units are available — which ships Aug. 1 and wholesales for $120, compared with Farmer’s average price of $85.

Farmer owner Peter Lang said he appreciated the challenge of the venture.

“Our line is more tough girl,” Lang said. “It doesn’t have the feminism of Mon Petit Oiseau, so combining elements of both creates a unique product.”

Others in the denim category said they plan to focus their design efforts on the nuts and bolts of the product, incrementally evolving and perfecting the washes, fits and details to generate consumer interest.

So important are washes that a number of companies plan to or are taking ownership of laundries. Guess has built a sample laundry on its premises, and Serfontaine moved the laundry process in-house last year. Citizens of Humanity, which is closing in on the $100 million sales mark, plans to open its own laundry in the next six to eight months.

“Today, it is so integral to the product that you want to keep development close to home,” said Jerome Dahan, owner and designer of Citizens of Humanity.

Down the road, Dahan sees washes taking inspiration from vintage jeans, as do designers at Guess and its contemporary division, Marciano.

Finishes will look subtle, more natural, said Daniel Aguirre, senior director of apparel merchandising at Guess. Ozone treatments will bring out the character of the denim, rather than heavily abrade it. Fabrics will feel softer, with lighter weights and the increased use of left-hand twills, which are woven to the left for a more supple effect.

“It’s about bringing out the character of denim,” Aguirre said.

For some, embellishment remains the industry standard, as a way to tailor product in such a way that no two will look alike, from hidden messages on inside pockets and unique linings to colorfully adorned back pockets.

For companies such as Seven and Blue Cult, the back pocket is a signature, a canvas for crystals, velvet and studs. A number of companies, such as Levi Strauss’s Premium Red Tab, said they plan to go forward with extras such as interesting screenprints and handpainted graphics on their denim.

Some denim players focus on a single point of distinction. True Religion has garnered a following, and imitators, for its flap pockets. Serfontaine owner Mik Serfontaine is banking on the appeal of his line’s rope stitch, a more pronounced threading that will have timeless appeal, meaning customers won’t mind buying more than one pair. He updates the look seasonally with different colors, most recently using Lurex filaments.

“You can only do so much with the fabric and hardware, but the thread in denim is the last frontier,” he said. “It gives a customer a reason to buy again.”

No one denies that the eternal quest for the ideal fit is still the constant challenge in a category that often excludes less shapely customers.

Those companies catering to the slightly older market that’s 30-plus are finding a receptive audience, such as Indigo Palms, a division of Tommy Bahama. The line, which offers a 7-inch and makes an 8-inch rise jean, incorporates wider waistbands, side seams running forward on the leg and slash pockets for an elongated silhouette.

A cuffed-jeans trouser for the holiday season and fabric mixing, such as adding tweed to a waistband and the back pockets for novel treatments, are ways to keep designs progressive, said Jean Marie Benz, design director for Indigo Palms.

“It’s all about making women look slimmer,” she said.