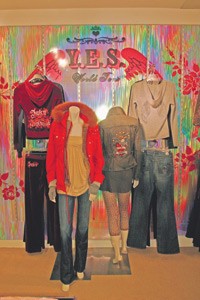 NEW YORK?— Contemporary sportswear is the sizzling category craved by retailers, and Bloomingdale’s is putting its own spin on the business.

The chain’s holiday promotion, World Tour, is rock-inspired, sexy, with a touch of Goth, but geared for both mothers and daughters. And it’s entirely composed of exclusives from three dozen designers and vendors.

“Everybody is going after the contemporary business and intensifying it and we wanted something that’s our own,” said Frank Doroff, senior executive vice president and general merchandise manager for ready-to-wear. “One-hundred percent of the promotion is exclusives from all of our best vendors.”

Bloomingdale’s strategy underscores the strength of the market, particularly over the last three years. It is the fastest-growing category at many better department and specialty stores, driven by prices and styles that are accessible to a wide audience.

Barneys New York, a pioneer in the market, as well as Nordstrom, Saks Fifth Avenue, Scoop and Bergdorf Goodman, all have advanced strategies to capitalize on the trend. Neiman Marcus got a late start, having historically put more emphasis on the bridge and designer markets. But the chain has gained ground in the last two years and plans to open four new concept specialty stores, called Cusp, stocked with contemporary goods. The units, to launch over the next nine months are: a 9,500-square-foot unit at Tysons Corner in McLean, Va., an 8,000-square-foot unit in the Century City mall in Los Angeles, an 11,000-square-foot store in Georgetown, and a fourth site to be determined.

Saks stages a contemporary week toward the end of September that spotlights the category at its stores, with parties, windows, and a direct mail piece. Joseph Boitano, Saks’ senior vice president and general merchandise manager of women’s and children’s, said Saks is planning an exclusive program for the fourth quarter, but would not divulge details.

“It’s been an amazing area of growth for Saks,” Boitano said. “We really got into it in a strong and important way three years ago and have experienced double-digit increases,” since then.

Macy’s East has been seeking more contemporary vendors, but it has been an uphill battle because of intense competition from other stores in the New York area. Macy’s West, which is a division of Federated Department Stores along with Macy’s East, has long maintained a stronger contemporary presentation.

For the fall-holiday season, Bloomingdale’s wants to sprint ahead. World Tour shops, ranging from 250 square feet to 750 square feet, will be up and running at the 31 Bloomingdale’s stores that sell fashion from Nov. 1 through Dec. 25. They are intended to be a magnet for the rest of the contemporary department, known as Y.E.S., and cast it as a more potent destination for buying holiday gifts.

To propel the growth, Bloomingdale’s renovated the contemporary space at its 59th Street flagship last year and split responsibilities between two divisional merchandise managers, instead of having one. Liz Jones handles Y.E.S. casual and private label, and Jeanne Sottile handles Y.E.S. collections and denim.

Twenty years ago, Barneys became the first retailer to identify contemporary as a potential winner by developing a shop called Co-op in its 17th Street flagship in Chelsea, which no longer exists. In 1999, Barneys almost doubled its Co-op space at its Madison Avenue flagship and soon after launched freestanding Co-ops. Ten are operating, with two more to open this fall and another two scheduled for spring. Store executives regard Co-op as Barneys’ “wayward offspring.”

Other retailers are also bullish on the business.

Bergdorf’s completed a renovation of its contemporary floor last fall and branded it 5F. It’s the only floor in the store to get its own name.

“Contemporary sportswear has been a hot category for awhile,” said Jim Gold, president and chief executive officer. “It’s been happening for probably five years, and continues to grow at a very rapid pace. In our case, it’s been greatly aided by the investment we made in the business by renovating the floor and putting a lot of marketing energy behind it.

“We have a lot of new product,” Gold added. “There are 15 new collections for fall that will be on the floor by Labor Day. We are continuing our effort to establish 5F as a brand to drive home the point that Bergdorf Goodman, which is known for luxury and runway fashion, is also a place with a very compelling contemporary assortment. It’s the very youthful side of Bergdorf Goodman. The contemporary customer is 10 years younger than our average customer.”

Retailers characterize their contemporary floors as accessible, meaning they have a broad age appeal and wide price range. Although certain contemporary items carry high price tags, the overall perception is that the floor is priced under designer and bridge. At the low end of contemporary, there are T-shirts, priced around $30 to $60. At the high end, there is denim, costing up to $450, and jackets from such designers as Theory, Vince, Diane von Furstenberg or Marc by Marc Jacobs, in the $500 or $600 range.

Store executives also point to the “aspirational” spirit of the floor, citing a refreshing designer ambience without the steep designer prices, which generates impulse purchasing. Contemporary is more about an attitude and lifestyle than a demographic, they said.

“Contemporary is generally one of the highest-margin apparel categories in stores, other than swim and coats,” said an executive who spoke on condition of anonymity. “There’s a faster turn and flow.”

One retailer said margins are in the mid-40 percent range, generally higher than designer, and in the same range as bridge and accessories.

“It’s a point of view, not necessarily geared to any age group, and kind of a collectors’ paradise,” Aronson added. “You can put pieces together and mix different designers. Each piece is made to stand on its own.

But how long can retailers ride the contemporary boom?

“It will continue to be important market, but the exceptional growth that people have seen is going to slow down,” said Jaqui Lividini, partner in LWP, a marketing and communications firm. “Fashion is changing. The pendulum was very girly, very sexy, very body-conscious and very embellished. That drove the market. Now fashion is becoming more understated, which will fare well for the bridge market.”

For its two-month run, World Tour has an aggressive buy, even though the promotion represents a small piece of Bloomingdale’s overall contemporary business on a yearlong basis.

“World Tour is our largest single buy for a marketing initiative,” Doroff said, referring to promotions revolving around temporary in-store shops. He would not disclose any figures on the contemporary business.

There will be World Tour hangtags and shopping bags, a winged logo, a gift-with-purchase charm bracelet from British designer Stephen Webster, magazine advertising and direct-mail pieces. Special events are being developed, and Bloomingdale’s two Christmas catalogues will devote about 12 pages to World Tour.

“The inspiration [for World Tour] is a way to create a great gift-giving business that is different from the past and exclusive to Bloomingdale’s,” said divisional merchandise manager Jones.