Sponsor Chanel brought the festival a new level of engagement and expertise. 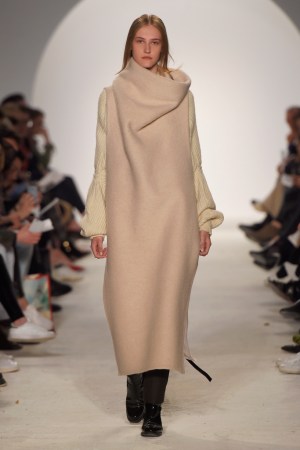 HYERES, France — Hyères or Cannes? Thanks to Chanel, it was hard to tell.

In the second of a three-year deal as a major underwriter of the Hyères International Festival of Fashion and Photography, the fashion house brought a new level of sophistication and engagement.

For its 30th-anniversary edition, which ran from April 23 to 27, Karl Lagerfeld was tapped as the festival’s artistic director; Chanel’s creative studio director, Virginie Viard, served as president of the fashion jury, and Eric Pfrunder, image director at Chanel fashion, was president of the photography jury.

With actresses, royals and fashion icons also serving on juries, the fashion crowd swarmed the French Riviera, including double the number of journalists to chronicle all the action on and off the runway.

The fashion jury included Princess Caroline of Hanover, Carine Roitfeld, Anna Mouglalis, Caroline de Maigret and Anthony Vaccarello, who scooped the Hyères prize in 2006, while actress Céline Sallette, singer Cécile Cassel and art dealer Kamel Mennour were among others on the photography panel.

“After Chanel, it will be difficult. We are already thinking about it,” said Didier Grumbach, president of the board of the festival and former president of the Fédération Française de la Couture, du Prêt-à-Porter des Couturiers et des Créateurs de Mode. He made that remark to inaugurate the festival in the presence of French culture minister Fleur Pellerin.

For student designers, it was an eye-opener to fashion’s big leagues. Anna Borhland still had stars in her eyes after the bash Chanel threw at the La Villa Romaine. “It was so beautiful. It is a different world; I never saw something like that before,” said Borhland, who ended up winning the Chloé prize, valued at 15,000 euros, or $16,297 at current exchange.

“Last time I came to the festival 18 years ago as president of the jury. It was very rock ’n’ roll. I came with my guitar,” mused Jean-Charles de Castelbajac.

Yet, the festival retained its laid-back spirit, with attendees lounging on the lawns of the Villa Noailles in their sailor stripes and statement eyewear. “I like this idea of a fashion field trip,” said television documentary maker Loïc Prigent, also on the fashion jury.

The festival, which was founded by Jean-Pierre Blanc in 1986, has been a springboard for designers such as Viktor & Rolf, Christian Wijnants and Julien Dossena.

Chanel perpetuates the sponsorship tradition started by art patrons Charles and Marie-Laure de Noailles, who tapped architect Robert Mallet-Stevens to build the Villa Noailles in the Twenties. Lagerfeld has long been a fan of the modernist mansion.

To be sure, brands are flexing their sponsorship muscles. Elie Saab was added to a list of donors that already includes Première Vision, LVMH Moët Hennessy Louis Vuitton, Chloé, Petit Bateau, Galeries Lafayette, Nina Ricci, Vilebrequin and Mercedes-Benz.
Should all the fashion houses have a prize? “It would be fair. It’s a way to give back,” said de Castelbajac, who lamented that, “creation has been ill-treated by the emergence of marketing.”

“And I am one of the privileged ones because I have had my own house for 44 years,” he added.

“In Paris, we aren’t enough young designers; unlike London, where there is a creative hub,” said a festival first-timer Simon Porte Jacquemus. “In London, there is help with show rooms; in New York, young designers get help to finance their shows.”

Jacquemus isn’t resentful. The 25-year-old had applied to the Hyères competition in 2011. His application was rejected. “It wasn’t the right time for me; I had already started my label two years before. Plus, the jacket I presented wasn’t that good anyway.” (Blanc expressed regrets for the festival missing Jacquemus’ application then.)

Jacquemus is among the eight finalists for the next LVMH Prize, which helps designers in a later stage of their careers. “To me, the LVMH Prize would really be about financial help, I am quite upfront about it. We have a structure that is developing quite fast — around 80 doors,” he said.

“Many of my friends started their own labels right after school; two or three years later, they had to close down,” said Louis-Gabriel Nouchi, a 2014 Hyères finalist who Galeries Lafayette has offered the opportunity to create a capsule collection.

Many finalists interviewed in Hyères expressed a wish to work for a big house at least for a few years.

The festival has evolved into a think tank where the future of fashion is shaped via discussions and round tables. Marketing on Instagram was the subject of a panel discussion organized by the Fédération Française de la Couture, and featured de Castelbajac, Jacquemus and Felipe Oliveira Baptista, also a past Hyères winner, and consultants Michel Campan and Uche Pézard.

Instagram is a marketing tool to reach advertising-resistant consumers and an Asian clientele, keen to be reached by luxury brands, Campan and Pézard argued. De Castelbajac who now posts around six images a day (down from 12 on his sons’ advice) sees Instagram as a pond of creative talents. “I hired a young photographer, Mathieu César, whom I discovered on Instagram. He wasn’t even a photographer then,” he explained after the conference.

Other sessions included one on sustainable development with Marie-Claire Daveu, Kering’s chief sustainability officer, plus an embroidery workshop with Maison Lesage.

The 28-year-old French German designer Annelie Schubert, a graduate of Weissensee Kunsthochschulen in Berlin, took home the Première Vision Grand Prize award. She impressed judges with her sculptural silhouettes hinged on an open back.

“We wanted a choice that isn’t scatterbrain, but has a commercial reality,” Prigent said. “She had cerebral proposition yet concrete. We asked ourselves: where will this designer be in 10 years? We had the spectrum of Anthony Vaccarello hanging over us. He is a fantastic example.”

“We wanted to create the Davos of fashion,” Grumbach told WWD. “We made it.”