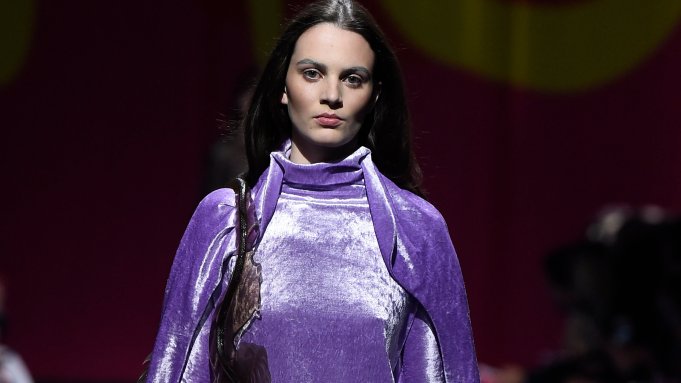 HYÈRES, France — The threat of gathering political storm clouds failed to dampen spirits at the just-wrapped 32nd edition of the Hyères International Festival of Fashion and Photography.

With the festival falling between the two nail-biting, final rounds of voting for the French presidential elections — with far right, anti-European Union candidate Marine Le Pen in the running — organizers were keen to press home the international outlook of the event with talents from far-flung nations including China, Russia and South Korea in the lineup of competing designers.

“I have said it before, both from my personal point of view and as the festival’s director: closing the borders does not make sense,” said Jean-Pierre Blanc. “We want to send the message to [Le Pen] that this does not work for us. On the contrary, they have to remain wide open.”

A shocking-pink silk flag billowed at full mast at the Villa Noailles, the early modernist estate that houses the four-day festival each year, a nod to the edition’s guest house, Maison Schiaparelli, with the brand’s style director Bertrand Guyon in the role of president of the fashion jury. At his side were industry players and personalities including Laure Heriard-Dubreuil, founder and director of The Webster Miami; fashion editor Camille Bidault-Waddington; actress Melissa George, and jewelry designer Sabine Getty.

Guyon also staged an exhibition of a selection of his couture creations for Schiaparelli in the villa’s former swimming pool. Titled “Story-tailoring,” the show centered on Schiaparelli jackets’ bar one shocking-pink chiffon dress that — suspended from the ceiling with fans projected onto it — swirled like a jellyfish.

The designer, who was new to the festival, spoke about the legacy of the storied villa — built by architect Robert Mallet-Stevens for 20th-century art patrons Charles and Marie-Laure de Noailles, and frequented by the likes of Man Ray and Jean Cocteau — in the context of the current sociopolitical climate.

“I’ve been thinking about life at the Villa Noailles, and on the French Riviera, in the years leading up to World War II, which were possibly the last days of happiness, lightness of spirit and freedom of creativity,” said the designer, who is working on the relaunch of Schiaparelli’s ready-to-wear line.

“It’s interesting because we’re here in a special creative place….but with these bad vibes coming from Marine Le Pen and the heavy political context. Here we are in this room with this shocking pink dress in the air, but there is fear for the future. Not just in France, but in the world, with the tensions with North Korea, the problems in Syria and the Middle East….”

Serge Carreira, a professor specializing in luxury at Sciences Po in Paris, said the festival over the past few years has seen increasing diversity in the selection. “It has set the festival not only as a French or European festival but really something that goes abroad,” he said, adding that the challenge for young designers, “in the middle of this huge competition, with too much offer, too many shops and images,” lies in being able to “catch something truly different that allows them to emerge. To not be submerged by these images and this flow of fashion and clothes all around them and hold their vision.”

Subtle political messages wove through the finalists’ collections, from the upbeat voluminous looks in splashy floral prints by Russian-born, Netherlands-based designer Danial Aitouganov, which he presented as a “celebration of women,” to French designer Marine Serre’s 19th-century costume-meets-athletic wear looks adorned with crescent moons echoing sport logos. Serre, who works in the design studio at Balenciaga and is also a finalist for the LVMH Prize, at the event was named the next guest designer of Galeries Lafayette, with a limited-edition collection by her to be distributed in the retailer’s select stores and on its web site.

Scooping both the main Première Vision Grand Prize and Public and City of Hyères Award at the event — which has served as a launchpad for major fashion designers including Anthony Vaccarello and Julien Dossena — was 29-year-old Swiss designer Vanessa Schindler.

She was one of 10 international designers competing for the prize, valued at 15,000 euros, or $16,345 at current exchange rates, a list that was whittled down from around 300 applicants. The designer will be given access to work with the specialty ateliers that Chanel controls through its Paraffection subsidiary, a prize valued at up to 15,000 euros. Schindler will also receive a 10,000 euro, or $10,900, grant from Petit Bateau and get to create a capsule collection that will be manufactured and sold by the brand, with royalties going to the designer.

Schindler, whose studio is based in Lausanne, Switzerland, finished her master’s at the Geneva University of Art and Design last year and has done internships at brands including Balenciaga in Paris, under former creative director Alexander Wang, as well as Henrik Vibskov in Copenhagen.

On her neo-chic, cinematic silhouettes, she combined mainly synthetic, interiors-inspired materials with urethane, a chemical resin that joins fabrics together when it dries, which she used as edges on garments — doing away with classic hems — and for ornamentation based on wavy, abstract patterns and plant-like motifs.

Among inspirations Schindler cited were the interiors of the recently demolished, spiral-shaped Bavinger House — completed by architect Bruce Goff in Norman, Okla., in the U.S. in 1955, and considered one of the earliest examples of modernist biomimicry — as well as the “chic and mystical spirit” of actress-turned-yoga instructor Yvette Mimieux.

Pierre Hardy presided over the event’s inaugural Swarovski Fashion Accessories Grand Prix of the Jury prize, which went to footwear designer Marina Chedel. Her playful, conceptual collection inspired by growing up in the Swiss Alps included a pair of shoes set within wavy wooden blocks echoing the outline of Mont Blanc. The award comes with a 15,000 euro grant from the Austrian crystal giant as well as the opportunity to undertake a project with Chanel’s Maisons d’Art for a value of up to 15,000 euros. Chedel was one of 10 competing designers, with accessories by the finalists projected in a film by fashion-focused video studio Psycho-PH at the start of the event’s runway shows.

Hardy said in making his selection he was looking for a “utopian,” rather than a polished profile ripe to slot into a studio — “somebody who has the desire and the instinct to create a new fashion matrix.”

The rise in accessories designers being appointed creative directors of houses, such as Gucci creative director Alessandro Michele, has helped open up visibility for the category, he said, adding of the festival’s new prize: “It reflects what is happening in the world. We know that today, for most brands, a big part of their business is generated through accessories. The lines are less rigid between accessories and ready-to-wear. Before, it was all about translating the creativity that went into ready-to-wear into the accessories, now it’s the other way ‘round.”

Ireland’s Daragh Soden won the Grand Prize of Photography and a 15,000 euro grant from Chanel, with British photographer Tim Walker leading a jury that included art director Ruth Ansel and designer Molly Goddard. “I’m especially excited to see what he will do in the future,” said British model Edie Campbell, who was also on jury duty.

French photographer Nolwenn Brod was awarded the Elie Saab Prize that included a 6,000 euro grant and a three-week artistic residency in Beirut to produce a series on the city.

Festival highlights included an exhibition by Walker, workshops with Pigalle’s Stéphane Ashpool and calligrapher Nicolas Ouchenir, and the series of conferences, including a roundtable debate on fashion tech led by IFM professor Lucas Delattre.

With brands today looking to both safeguard their heritage and cultivate ties with the next generation of designers, a growing number of heavyweight industry players have moved in on the festival over recent years, contributing to a weightier media attendance and slicker show production. Gift bags filled with Chanel makeup dotted the benches at the show venue, just like an established Paris Fashion Week show, only with as the setting an old warehouse located on salt marshes dotted with flamingos. The site had been decorated with a bold mural by former Hyères finalist Xénia Laffely.

“Hyères is all about youth, young talent, new creation,” said Chloé chief executive officer Geoffroy de la Bourdonnaye during a midfestival seaside lunch, with two former winners of the Chloé prize in attendance: Liselore Frowijn, from the 2014 edition, and Camille Kunz, who won in 2013 and now works in the studios of OAMC. The 2017 Chloé prize went to German designer Gesine Försterling, while a surprise honorable mention from the jury — and 10,000 euro grant from Maison Schiaparelli — went to Finnish designer Maria Korkeila for her punk-infused men’s collection partly inspired by Seventies Playboy magazines.

Stuart Ford, general manager, Western Hemisphere at Woolmark, which also partnered with the event, echoed the sentiment: “At the end of the day, if you stick with our traditional market — suiting, for example — that’s a declining, aging market. Where we need to be is where these guys are, at the nexus of streetwear and contemporarywear.”

“And this idea of the villa regaining its original center of interest is wonderful,” he added. “There is no other event quite like Hyères.”