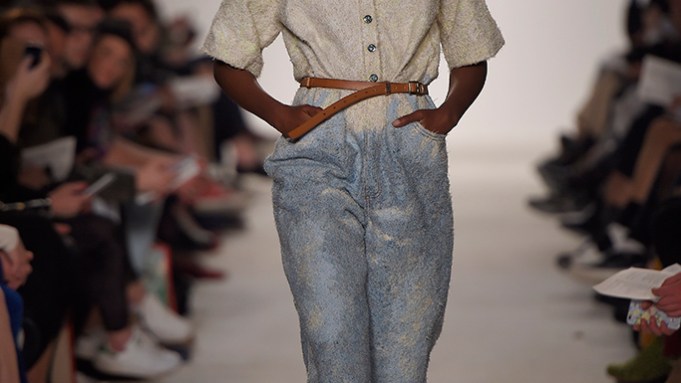 The annual Hyères Festival has evolved into a popular recruiting ground for big luxury groups. Among the crowd were Mathias Ohrel, founder of m-O, a recruitment firm in the luxury sector, as well as Chantal Gaemperle, LVMH Moët Hennessy Louis Vuitton’s group executive vice president for human resources and synergies director.

“We follow all the finalists,” said Ohrel. “Winner or no winner; it has never been a criterion for us. Winning a prize doesn’t change our perception much.”

Added Clémence Désobeau, a retail, fashion and luxury goods consultant at Badenoch & Clark: “There’s no bad candidate; there are only bad equations.”

While Annelie Schubert of Germany took home the grand prize, here’s a look at the four other Hyères 2015 finalists.

Education: Newly graduated from the the Hochschule für Künste in Bremen, Germany.

Prize: Chloé prize, for which each designer is invited to create a silhouette in the spirit of Chloé. It comes with a grant of 15,000 euros, or $16,735 at current exchange.

Work: Bornhold presented a jumpsuit for Chloé. “My idea was the space suit. You’re in your own space; you can be free; it’s Chloé freedom,” she told WWD. Sewing threads on the fabrics, she said, was a three-step process. “I cut the yarns into little pieces, mixed the colors and sewed the yarns on the rough fabrics,” the designer explained. The result resembled denim. “I am a fan of denim; it’s so authentic. I like the idea that denim gets its own life.”

Praise: “Anna has a sunny personality and a great sense of humor, which shines through in the way she has channeled the spirit of the Chloé girl with nonchalance and modernity,” said Chloé president Geoffroy de la Bourdonnaye.

“It was very cool, very Chloé, not in the materials that she used — slightly too rigid for Chloe — but it seems she can lighten it so it’s perfect,” said past winner and jury member Anthony Vaccarello.

Inspiration: She cites Walter Van Beirendonck and Bernard Wilhelm among her favorite designers.

Work: The redheaded designer impressed the jury with the paintings she made for her prints, including a silkscreen-printed woolen coat paired with a printed skirt, hand-pleated with cutouts. “I wanted to created an optical illusion…I was inspired by a huge triangle piece at the Palais de Tokyo,” she said.

Education: B.A. and master’s studies at Aalto’s fashion department (headed by Tuomas Laitinen, a designer who won the honorary Hyères prize himself in 2006).

Prize: A special mention from jury members Carine Roitfeld and Olivier Zahm, guaranteeing that CR Fashion Book and Purple magazine would be following her closely.

Work: Määttänen impressed with her thick and fluffy textures, bringing a new take to formal shapes such as the kimono. She followed on the heels of design trio Siiri Raasakka, Tiia Siren and Elina Laitinen, who scooped the grand prize in 2012, and Satu Maaranen, who won in 2013.

Inspiration: “I like the work of Nicolas Ghesquière, especially when he worked at Balenciaga,” she said.

Education: A graduate of the ArtEZ Fashion Masters in Arnhem, Netherlands.

Prize: The public prize from the city of Hyères (she was also a semifinalist for the 2015 H&M design award).

Work: Chen used a lot of velvet, transparent organza and faux fur. There was a midlength evening dress in wool flannel, organza and polyester jersey decorated with fake-fur pompons, embroideries and crochet work. To wit, her headwear made from threads.

Inspiration: She cited Alexander McQueen and Givenchy as her favorite houses.