Hyosung Corp. wants to knock off Invista and become the number-one producer of spandex in the world with its Creora brand. 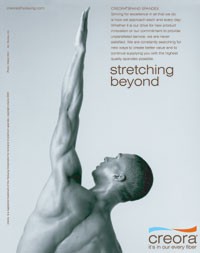 NEW YORK — Hyosung Corp., a $5.5 billion conglomerate based in Seoul, South Korea, wants to knock off Invista and become the number-one producer of spandex in the world with its Creora brand.

Industry experts, however, said that is a daunting challenge considering that the $8.4 billion Invista, the most recognized producer of global spandex with its Lycra brand, has held the top spot for decades.

Despite a mature marketplace, officials at 38-year-old Hyosung believe Creora can be spun into a globally recognized brand in the next several years. The company operates seven divisions — textiles, chemicals, trading, industrial materials, construction materials, power materials, and an information and communications operation.

The newest applications, such as spandex that retains its elasticity during a burnout treatment process, can be printed on, adapted for use in molding bra cups and may be incorporated in a variety of apparel categories. They include intimate apparel, sleepwear, loungewear, robes and ready-to-wear. Introduction of the specialty burnout spandex velvet received strong reaction when it was showcased in September at the Lyon, Mode City trade show in Lyon, France, said Ria Stern, director of North American marketing and global brand for Creora.

Hyosung entered the nylon business in 1966, started its polyester business in 1973 and began producing spandex in 1992. Annual production capacity is 54,000 tons, making Hyosung the second-largest spandex resource in the world with overall textile revenues of about $1 billion a year. Production is in four state-of-the-art facilities: two plants in China, in Jiaxing and in Zhuhai, and two in South Korea, in Anyang and Kumi.

Greg Van Nunes, Creora’s president of the Americas and Europe, said the company was looking for manufacturing facilities in Europe and would evaluate sites in the U.S., Mexico and Brazil.

“We plan to add people, and there probably will be no joint venture,” he said. “We plan to build from the ground up because if we build assets, we can be cost competitive and you need not modernize technology. We are very lean and our vision is clear.”

Hyosung has 6,175 employees, 19 branches and 19 subsidiaries worldwide, and plans to open five fabric marketing showrooms in the next month in Hong Kong, Seoul, Milan, New York and Shanghai, at the Shanghai Mart.

This story first appeared in the October 28, 2005 issue of WWD. Subscribe Today.

“Invista had great skill development that we can add to Hyosung,” said Van Nunes. “The additions of key marketing personnel in Europe and the Americas to work with brand and retailers on fabric development and sourcing, the linkage to key sales and business development personnel in Asia, and our new fabrics showrooms globally will provide our customers with that advantage.”

Addressing projected growth for Hyosung’s spandex business over the next several years, Van Nunes said, “The belief is that the industry will grow at 6 to 8 percent annually. We anticipate growing at twice that rate, which means share gain for Creora.”

He noted that Invista’s production capacity for spandex is 90,000 tons, while other resources generate 10,000 to 20,000 tons a year. Overall, Invista manufactures an estimated 1.5 million tons of fibers, resins and intermediates.

Stern said Hyosung’s business model is based on solidifying partnerships with retailers, mills and manufacturers through innovation and creativity.

“We have a market-driven business model focused on working with partners in the trade,” she said. “We won’t do consumer-based marketing or advertising. It will be focused all on the trade. Our focus will be on the best-quality products, innovation, service and the Creora brand, but at a value price.”

The company has embarked on a multimillion-dollar global trade ad campaign photographed by Walter Chin featuring a new logo with the tag line “Creora, It’s in Our Every Fiber,” and ad copy saying “Stretching Beyond,” Stern said. The black-and-white ads show yoga instructors stretching into a variety of positions. The tag lines and logo were gleaned from the feedback of two focus groups in the U.S. and Europe organized by brand development firm Swoop, including a panel of retailers, manufacturers and trend forecasters.

Stern said 2,000 promotional brochures with Chin’s visuals will be mailed to clients and a video featuring the yoga instructors in action will be part of Creora’s marketing package.

Asked how Hyosung will be cost-effective and present customers value-priced product while investing in new facilities and supporting a major ad campaign, Stern replied, “We believe we have unique technology that makes us cost-competitive. Part of the key to being cost-competitive in terms of manufacturing is we’ve been able to invest in the assets. All existing assets are cost-competitive.”

Still, Linda W. Kearns, global communications director of Invista, said, “It takes time to build a global brand today, a lot more than a few million dollars. We think today’s times demand a new business model and others seem to be building their business model on what we were. We have 40-plus years of investment in innovation and market leadership, and certainly, from a brand’s perspective, we don’t feel threatened.

“There are no other comparable brand names that are as recognized by consumers as much as Lycra is in this brand market. Our strategy is to support our customers through innovation and brands.”

Over the past decade, Invista and DTI spent in excess of $250 million to market and advertise DuPont’s trademark brands, including Lycra, on a global scale, according to industry estimates.