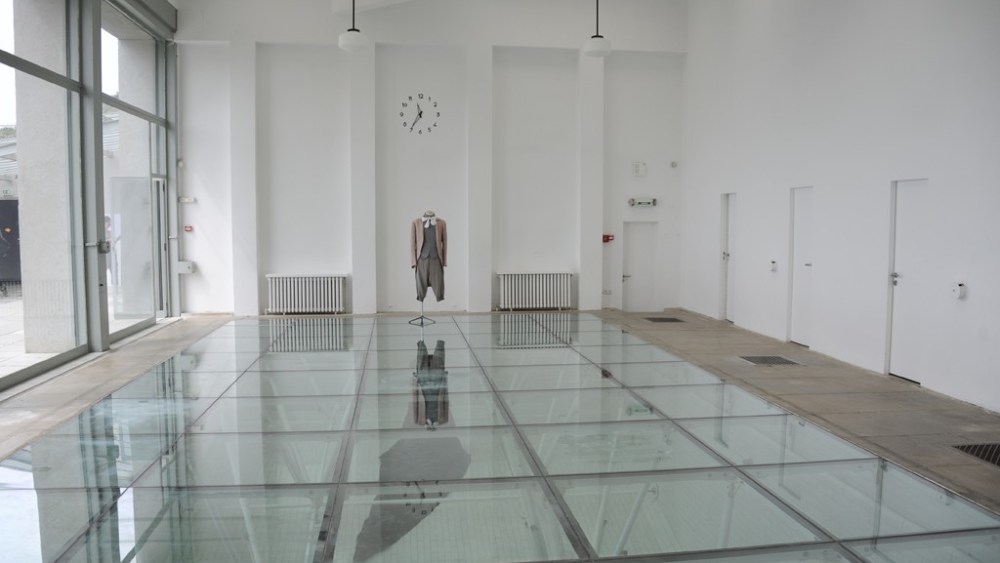 That was the magic formula Yohji Yamamoto was looking for as fashion jury president of the 27th edition of the Hyères International Festival of Fashion and Photography. Held at the Villa Noailles here, the three-day event ended Sunday. The jury members included fashion photographer Paolo Roversi; Olivier Saillard, the director of the Musée Galliera in Paris, and French film director Christophe Honoré.

Whittled down from 290 entrants initially, the competition’s 10 finalists — some frozen like rabbits caught in headlights, others working it like car salesmen — on Friday morning had to present their creations to the jury as well as a pack of international journalists. Later that night, their collections each rolled down the runway at a show held in a vast warehouse located on the city’s salt marshes.

The exhibition lineup at the Villa Noailles included works by fashion photographers Inez van Lamsweerde and Vinoodh Matadin and photographer Jason Evans, with an installation by Yamamoto in the site’s disused swimming pool.

Dressed in black, despite intense bursts of heat from the Provençal sun, Yamamoto, in an interview held on one of the villa’s stark concrete terraces, said he found the festival “quite unique,” a “cultural adventure, which I appreciate.” The terrace overlooked the villa’s main lawn, on which fashion students could be seen buzzing around or lounging in colorful deck chairs bearing prints by the London-based fashion label Swash.

“It is very gorgeous for young students — possibly too gorgeous,” chuckled Yamamoto. “The location is comfortable, beautiful sky, beautiful sea. People are nice, not like in Paris, they’re not so busy.”

Recalling his days as a fashion student, the designer said it took him two years to get his first fashion prize, after having faced a series of designer fashion juries, each time presenting one look. “[Hyères] is very special. First, there is the selection [process], based on one outfit and one look. Then afterwards they make more than six outfits, a tiny collection. I feel they are very lucky, but at the same time it’s very tough. Making one outfit can be lucky, but for a small collection you need real power,” he said.

Fashion professionals attending the festival lauded the maturity and strong identities of the designer finalists.

“I found it a lot more conceptual, and it was good to see a wide range of nationalities,” said Sylvie Zawadzki, general delegate of the French Federation of Fashion and of Ready-to-Wear of Couturiers and Fashion Designers, which during next Paris Fashion Week will inaugurate a young designer showroom, likely hosting around eight talents.

Argentine Hyères finalist Paula Selby Avellaneda, a fashion student at IFM in Paris, already sells a line at Opening Ceremony in New York and has dressed a number of musicians, including The National, Peaches and Kelley Deal of The Breeders.

Highlights from her rock-tinged dress-centric collection, crafted from shiny reflective and mirrored materials, included a bias-cut glow-in-the-dark beaded jacket; a silk jacket covered in tinsellike strips of magic mirror, and an intricate bridal dress that looked as delicate as a snowflake, embroidered with leaf-shaped swatches of different crinolines.

Estonian designer Ragne Kikas, who won the Première Vision Award, valued at 10,000 euros, or $13,250 at current exchange, plus the audience award, impressed the judges with her sculptural knitwear creations inspired by suits of armor.

The event’s fashion show was streamed live at the Palais de Tokyo museum in Paris on Saturday night, with Belgian designer Lucas Sponchiado winning the audience award there.

“It’s a very good year, very mature, with very different moods and inspirations,” commented Serge Carreira, a lecturer in luxury goods and jewelry at prestigious Sciences Po university in Paris. He lauded the constructions and fabric work on display in Canadian designer Steven Tai’s collection. Inspired by book binding techniques, Tai had crafted a blobby pair of pants made from more than 260 feet of checked fabric that had been cut and stacked to resemble pages.

“It’s a celebration of being nerdy,” said the designer.

Tai won the festival’s new Chloé Award, valued at 15,000 euros, or $18,844 at current exchange, for which designers were each invited to create a silhouette in the spirit of Chloé. Inspired by fishing garb, Tai’s cool outfit paired a wool crepe sweater that had been unpicked and embroidered with fish, with a pistachio silk cargo pant and a quilted white cotton-linen hooded jacket whose wadding had been cut open “to let it breathe.” Tai is currently interning at Stella McCartney in London.

But the event’s L’Oréal Professionnel-sponsored main prize, also valued at 15,000 euros, went to one of the more playful, free-spirited acts: Finnish designer trio Siiri Raasakka, Tiia Siren and Elina Laitinen, who delighted the jury with their rave culture-inspired men’s wear collection. The girls, who pulled the collection together on a shoestring, with help from a few sponsors, such as Swarovski, which provided raw materials, said their main objective was to have fun.

“Nobody really makes crazy things for boys,” said Siren, the punk member of the group, looking all awkward adolescent in her colored headdress, metallic platform shoes and multihued lace skirts.

The trio piled models up with a happy accident of rainbow-colored streetwear-inspired garments. Glittery rose-print knitted shrugs came slung over sweatshirts, one patterned with wisps of felted merino wool meant to evoke a tie-dye print. There were crystal-embellished caps and baggy pants covered in a shaggy mass of colored threads that — inspired by traditional Finnish rug-making —gave a tribal flavor.

“The fantastic thing about Hyères is that it gives an opportunity for people who have talent but most importantly the passion to express why they are involved in fashion,” said Terry Jones, founder of i-D magazine, who was on the jury. He felt the girls incarnated the energy of a new youth movement that has been swelling for the past three to four years and hopes to work with them.

“I-D will always support people who bring the theater of fashion back into real life,” he said. “In the end, they made clothes that the guys looked like they were having fun wearing.…More than just the industry, that is what the world needs right now.”