I’m with the band (with)

How technology's changing the way rock stars are made. 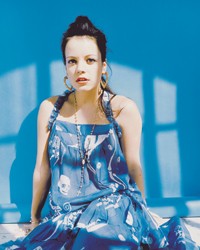 How technology’s changing the way rock stars are made.

Her tracks have been listened to 1.7 million times, but 21-year-old London musician Lily Allen has yet to officially release a record. Welcome to the burgeoning online music industry, where new artists are networking their way to success, armed with talent, marketing savvy and stylish clothing—and not necessarily in that order.

Allen has been building a name via MySpace, the social interaction site where she counts more than 30,000 friends—including EMI, with whom she signed even before setting up her MySpace page. Allen checks the plays of her expletive-laden pop tunes “at least every hour,” and credits the Internet, a tool that has created sensations out of bands such as The Arctic Monkeys and Gnarls Barkley, for where she is today. How does one parlay bandwidth into musical stardom? First, provide witty blogging. Allen’s includes frank apologies for bad live gigs: “Sorry to anyone who came….I had to fire my sound guy tonight, it was rubbish.” Second, adopt a quirky dress sense. Allen, who wears the likes of Marc Jacobs and Diane von Furstenberg, is known for her signature combo of dresses, sneakers and chunky gold jewelry. Already, she’s done more photo shoots than concerts.

Another singer strumming up a Web storm is Scottish-born Sandi Thom, who, according to the stories, decided to broadcast concerts live on a Web cam in her basement after her car broke down on the way back from a show. The 24-year-old—who sports a casual rocker look, with chunky belts over jeans teamed with leather boots and a jacket—became a media sensation within weeks and signed a record contract live on the Web in March. Her meteoric rise, however, elicited attacks from skeptical bloggers, who suspected it to be an elaborate public relations stunt. Online music enterprise consultant Andrew Dubber views it as “a fabulous piece of musical mythology. People like to tell those kind of stories: The Cinderella one is a really good one.”

While Thom’s may be a too-perfect rags-to-riches tale, her debut single, “I Wish I Was a Punk Rocker” reached number two on the U.K. chart in May. Chris Dabbs, account director at Streaming Tank, which broadcasts Thom’s gigs, believes “there’s nothing stopping anyone from doing it. It depends how people talk about it and how that message goes around—spread through listeners on the Internet, via blogs, bulletin boards, sending e-mails.”

It’s good old viral marketing in a new form. Take 28-year-old British singer Imogen Heap, whose quirky boho style includes feather hair accessories. Her U.S. break came after 10 years in the record industry when one of her tracks was featured on The O.C.’s second season finale. Speculation online from viewers desperate to know the artist grew into a new teen audience willing to pay to download Heap’s songs. Her solo album, Speak for Yourself, speaks volumes about Heap’s entrepreneurial spirit—it was produced on her own record label, which she funded by re-mortgaging her house.

Of course, consultant Dubber stresses, clever blogging does not ensure success. “You have to be smart at marketing. We’re really talking about entrepreneurship, setting up your own business as an independent act, and the Internet is a really powerful tool to do that,” he says. Allen, for one, believes she might have netted more online. “I love my record company, but for every album sold, I’ll get a few pennies,” she says. “If I had done it all through MySpace, with 30,000 friends, if I had charged a tenner for the album, what’s that? 300,000 pounds. That’s a lot of money.”

This article appeared in WWD FAST, a special publication of WWD available to subscribers.