The high-end Iceberg line is U.S.-bound. 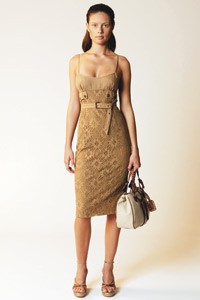 Gilmar Group, the fashion manufacturer based in central Italy with a portfolio that includes Iceberg, Ice B, Ice J, Gerani, Frankie Morello and Giambattista Valli Paris, wants to reposition Iceberg in the U.S. at a higher level.

The company felt Iceberg didn’t have enough U.S. exposure and wasn’t carried in the right stores.

“Until now, its positioning wasn’t adequate, so we want to concentrate on upscale sales points,” said Paolo Gerani, chief executive officer of Gilmar Group. “Though they were performing well, we temporarily stopped distributing our secondary and contemporary lines Ice B and Ice J in the U.S. so as not to create confusion for Iceberg.”

To carry out its plans, Iceberg has named Angela Casiero vice president of the U.S. division, based in New York.

With Giambattista Valli as design consultant, Iceberg mixes a sportswear edge with uptown chic details and embellishments. The prime focus is knitwear and slinky dresses, with glammed-up outerwear in between. Wholesale prices run from $255 for basic knitwear to $2,550 for an elaborate evening dress.

Over the years, Iceberg’s offerings were expanded to include watches and eyewear, licensed to Retkie Industries Ltd. and Allison, respectively.

Gerani noted that in 2005, sales for North America grew 50 percent compared with 2004 and are on target to perform at a similar level this year. Gerani forecasted steady double-digit growth for the next three years.

Iceberg is also pushing its accessories business, which will launch in the U.S. in 2007.

Once the ready-to-wear and accessories categories are well positioned, Iceberg will reintroduce its contemporary and secondary lines to the U.S. and eventually open namesake stores.

Iceberg is carried at Jimmy’s in New York, Lior in Las Vegas and Chloe Lane in Park City, Utah. “We are also in talks with Barneys and Saks,” Gerani said. The fall ad campaign features Naomi Campbell shot by Solve Sundsbo against a gold-tinted brick wall.

Founded in 1974 by Giuliana Marchini Gerani, Iceberg is considered one of Italy’s first luxury sportswear brands with a penchant for knitwear. With 350 employees and 2005 sales of $140.2 million, Gilmar Group annually transforms 1,242 miles of fabrics and 220 tons of yarns into 1.5 million garments in its high-tech factory sprawled over 430,000 square feet.

Iceberg has 11 namesake stores around the world, in addition to 300 points of sale.

In the beginning, especially, Iceberg broke out of the mold by offering contemporary and colorful knitwear splattered with cartoon designs or Pop Art images. The Gerani family’s passion for art influenced Iceberg’s new store concept. With a relaxing and homey atmosphere, the store features small rooms dedicated to products such as knitwear and eveningwear.

On display in the various venues are artwork by known and unknown artists, such as Andy Warhol or Keith Haring, interspersed with paintings by young Italian artists such as Ugo Rondinone or Giovanni Lombardini.

“The idea is to rotate the artwork around the various stores. We purposely kept the decor and the colors simple so that the paintings could stand out,” said Gerani, referring to the cream carpeting and walls, dark wood details and faux suede Alkantara sofas.