Despite a golden triangle address — home to brands like Louis Vuitton and Hermès — and a profusion of luxurious cashmere outerwear and precisely tailored suits in its new store, Icicle is not after designer-label status.

“It’s another category of brand — it’s a brand to serve people,” said Tao Xiaoma, one of the label’s founders. Tao, who is called “Shawna” by non-Chinese colleagues, spoke to WWD from the top floor of the four-story boutique, a sparsely populated mansion lined with racks of chic attire for men and women, including tapered trousers for men, seamless knits and roomy suit jackets.

The company has 270 stores in China, and counts more than 2,500 employees, but is little known in the West — except as the owner of historic French fashion house Carven, which it bought last year.

“We don’t use ‘affordable luxury’ to describe ourselves — we say ‘reasonably priced,’” explained the executive. “It’s really a high-quality lifestyle brand,” she added.

“It’s reasonable in all manners — all the sourcing, the production is reasonable — raisonné in French,” added Isabelle Capron, general manager of the company’s French subsidiary Icicle Paris Mode. Capron was referring to a term used, for example to evoke agricultural practices that respect the environment and the well-being of workers and animals.

Founded in 1997 by Tao and her husband Ye Shouzeng — the pair studied design at the Donghua University, one of China’s leading fashion design schools — the label had an ecological bent from the outset, one that draws on ancient tradition. 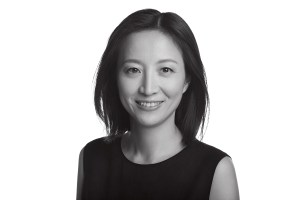 It’s not just about recycling and sustainability, explained Tao, “it’s the mind.”

She spoke of three values in Chinese culture: “‘jin tian’ means sincere reverence to nature,” she said, while “ai ren” refers to “kindness for others” and the principle of “xi wu” is cherishing what is given to us.

“We believe it’s not only in us, the founders — it’s a seed in every single person,” she added.

“It’s 5,000-year wisdom, but with the modernization of society, people forget that,” she said. “It’s always there for us, I never think it’s a new thing — the challenge is how to modernize it,” she continued.

Fresh graduates, and in her husband’s case, an assistant professor, the pair realized they couldn’t find clothing that suited them.

“We could not find natural clothes — professional-looking — so we thought, ‘why not design these kinds of products for career people,” she explained.

“China was changing and urbanization was really important so people needed solutions for their daily work life, so it was a moment where they had a vision that there could be another way to do clothes,” added Capron.

Twenty years on, the focus is the same. Though the product has evolved toward the higher end, they still have a younger line for emerging professionals, in addition to the Atelier line designed in Paris and all-natural Earth line.

“Icicle’s clients are not fashion victims, they are typical professionals, including business managers or teachers or engineers or lawyers — we have a lot of these kinds of people, especially working in intellectual professions, for example architects, journalists and also classical music players,” noted Tao.

For these clients, “fashion isn’t the most important thing in their life — but high quality is important for them,” she added.

The brand calls its philosophy the “natural way,” which refers to creating, producing and living by nature. It focuses on natural materials, cashmere, linen, wool, silk and cotton with natural plant dyes or left in natural colors. Leather goods are sourced from Tuscany, and tanned with natural extracts like chestnut and pine.

Icicle has its own factories in Shanghai that have won awards for ethics and environmental credentials; water treatment, energy management and material reuse are all priorities, according to the company.

For the George V boutique, Belgian architect Bernard Dubois used a light limestone for the floors and other details; the powder from the same stone was used for the plaster on the walls and ceilings — which curve into each other, without hard right angles. Blocks of natural wood serve as furniture, and an alcove on one floor has oak panels, while the third-floor library is lined with walnut wood.

Icicle opened a design studio in Paris in 2013, gradually building a multicultural team of employees from China and France, under the direction of Capron, a former Fauchon executive. It now employs nearly 50 people in Paris, including Bénédict Laloux, formerly a senior designer at Chloé, who previously worked on the design teams at Lanvin and Celine, who has been promoted to creative director, designing the Atelier line. Laloux recently returned to Paris after spending a year with the brand in Shanghai.

“It’s a natural way of living, we need to express the whole concept,” she said, facing a display of Japanese ceramics that sat next to the library, stocked with fashion, art and design books, a mix of influences from the East and the West.