Iconix Brand Group's Bongo brand is looking to get its fire back with a new face, Vanessa Minnillo. 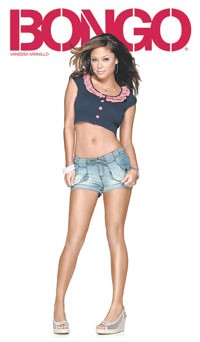 Iconix Brand Group’s Bongo brand is looking to get its fire back with a new face, Vanessa Minnillo.

Best known as an “Entertainment Tonight” correspondent and most recently seen on the arm of pop star Nick Lachey, Minnillo chose the latest Bongo ads for her first endorsement deal. The spring ads will appear first in March issues of fashion and lifestyle magazines, as well as on popular teen Web sites like MySpace.com.

The campaign was shot by Matthew Rolston at New York’s Splashlight Studios. The ads showcase Minnillo as an ultrasexy Sixties-inspired pinup girl, dressed in a pair of denim shorts and a tiny top. Another image shows Minnillo in a backless top with denim shorts.

“Bongo always partners with the latest ‘It’ girls for its advertising and marketing campaigns, and this season that girl is definitely Vanessa,” said Dari Marder, Bongo’s creative director. “She is funny, charming and beautiful. She’s the embodiment of the Bongo girl.”

Minnillo will make personal appearances on behalf of Bongo and participate in other events to celebrate her partnership with the brand. She follows previous Bongo spokeswomen Kristin Cavallari, Nicole Richie and Rachel Bilson.

Bongo has been an underperforming brand for Iconix. Iconix switched licensees in August after a tough run with its longtime jeans licensee Bongo Apparel Inc., an affiliate of TKO Apparel Licensing.

Neil Cole, chief executive officer of Iconix, said in July that the former licensee “was definitely not performing and not doing a good job.” The next month, Iconix cut ties with that company and signed a new jeans licensee, The Mamiye Group.