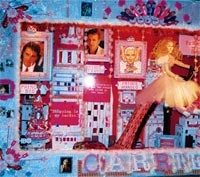 NEW YORK — Few things unleash the holiday frenzy quite like the window unveilings in Manhattan. Hundreds crowd the sidewalks, craning their necks for a glimpse of the latest scenes of the season, their storytelling magic a kind of lost art.

Yet their purpose is clear: Holiday windows are typically devised as winsome distractions from the world at large to lure passersby inside — whether it’s the droll antics at Barneys New York, the elaborate beauty at Bergdorf Goodman, the whimsical tableau at Henri Bendel or the classic mechanical story-inspired scenes at Saks Fifth Avenue, Bloomingdale’s, Macy’s and Lord & Taylor.

Simon Doonan, creative director of Barneys New York, has applied his usual jocund tactics with a tribute to the “Sex and the City” stars. Each Madison Avenue window is devoted to one of the actresses with wildly tongue-in-cheek themes framed as fairy tales. Sarah Jessica Parker is “The Princess and the Shoe,” Kim Cattrall is “Sinderella,” Kristin Davis is “Schnow Vite” and Cynthia Nixon is “Little Red Henna’d Head.”

Parker’s window is decorated with portraits of her beaux — past and present — and features a caricature of the actress dressed in a Behnaz Sarafpour tulle ballerina dress and sitting atop a giant Manolo Blahnik stiletto. “She’s discarded her Manolos in favor of bunny slippers,” said Doonan. “It’s the perfect time to pay homage to the girls because their last season is coming up.”

The retailer held a triple-pronged party Thursday night to unveil its holiday windows and celebrate the debut of Fargo’s book, “Dreams Through the Glass,” as well as its collaboration with Swarovski — which includes chandeliers conceived by designers such as Diane von Furstenberg and Ted Muehling.

“When I started working on the book, I began to realize that my most memorable works have characteristics of a dream,” explained Fargo. One of the Fifth Avenue windows features a mannequin in an ethereal white gown surrounded by a flock of flying geese. Another showcases rich, chocolate hues in the form of a mannequin in an elegant taffeta riding habit, a wooden horse and cherubs.

Saks Fifth Avenue, which unveiled its windows Monday night, based them on “The Gift,” a story by Sandra Magsamen about the legacy of music. The mechanical windows feature children playing music in several classroom scenes, culminating in a concert where “they realize their own gift of song,” said Tim Wisgerhof, Saks’ window director.

Bloomingdale’s hit upon a somewhat similar theme with its windows, which refer to Harry Connick Jr.’s recent holiday CD in which he sings classic carols such as “Silver Bells,” “I’ll be Home for Christmas” and “Frosty the Snowman.”

“We created scenes depicting the songs in whimsical manners indicative of Bloomingdale’s, as well as Harry’s persona, and in keeping with the holiday feeling,” said Joe Cotugno, operating vice president, creative director, visual merchandising, for the store. The windows will be unveiled on Tuesday.

Macy’s Broadway windows are based on scenes from the classic film, “A Christmas Story.” Sam Joseph, vice president of creative design for the retailer, struck upon the idea after happening upon the film while home sick and watching television in the middle of the night. “I figured it would be a fun one to do,” said Joseph. “So I came in to work the next day and sketched it.”

Lord & Taylor went back to its roots and its traditional windows based on Virginia O’Hanlon’s story, “Yes, Virginia, There is a Santa Claus.”

The running theme is “Let’s all believe in Santa Claus” and includes mechanical scenes that are vignettes from the story and features tiny reproductions of New York in 1895.