After years designing custom-made gowns with a little inspiration from mom, Yuliya Zeltser has found her niche with Igigi. 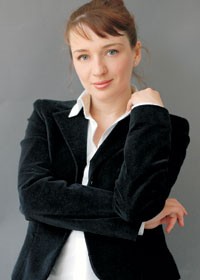 NEW YORK — With years of experience designing custom-made gowns and a little inspiration from mom, Yuliya Zeltser has found her niche with Igigi.

The Ukrainian-born, self-taught designer of the line of fashionable plus-size sportswear and special-occasion clothing moved with her family to San Francisco in 1991, where she began making clothes as a hobby while studying medicine in school. After developing her own little fan base, which became a roster of regular clients, Zeltser began her small business of making custom-made gowns and soon traded medicine for a career in fashion.

That sparked an idea to launch a full range of fashionable plus-size clothing, but Zeltser wasn’t going to do it without the proper research. Her mother, who also happened to be a plus-sized woman, was having just as much trouble finding fashionable clothes as were Zeltser’s clients. So the mother-and-daughter team embarked on a journey through the plus-size arena.

“My mom and I went to store after store, and I really couldn’t believe there was nothing there that I would wear if I was a plus-sized woman,” Zeltser said. “And my mom didn’t want to wear that either.”

From that moment on, she made it her mission to start a fashionable and affordable plus-size line of clothes. By 2000, she had done her homework and launched Igigi.com, a Web site where she sold her designs.

“We did no advertising or marketing, and I made only a few things, just to test how they sold,” she said. “I ended up selling everything I made.”

Customers were quick with feedback, telling Zeltser what was wrong with the fit and what should be changed. She found that every full-figured body was different since women carry their weight in different places. Zeltser said she soon saw that the plus-size market had to be learned as its own industry, and a whole new fit system needed to be developed.

“Just because a woman is a size 22 doesn’t mean another size 22 woman will fit into that same garment,” she explained. “It’s a real challenge to figure this out, so I now understand why there are so few leaders in this area.”

Zeltser began a new system with the help of Catherine Schuler, a friend and former plus-size model. They developed a chart of sizes in five body shapes — the hourglass (large bust, small waist, large hips), the triangle (larger on bottom, smaller on top), the reverse triangle (large top, small bottom) and so on. Now, Zeltser is working on developing a size calculator, so a customer can enter her measurements at the Web site and get recommendations of items for her particular shape.

Today, Zeltser said, Igigi.com has more than 10,000 subscribers and 5,000 loyal customers. She said she’s now confident in her fit, so she will begin wholesaling the line to boutiques for the first time for the fall 2005 season. So far, she said, she has orders from about 40 specialty retailers, including Vive La Femme in Chicago, Michelle’s on New York in Islip Terrace, N.Y., More to Love in Antioch, Calif., and Goddess in Greenville, S.C.

“I would get e-mails and calls from retailers asking for me to sell them the line,” she said. “I just wasn’t ready, until now.”

The Igigi line, which covers size 14 to 32, wholesales from $20 for a top to $80 for a gown. Zeltser said her volume, which is at $1 million a year now, will jump to about $4 million next year, with 20 percent of that increase coming from boutique sales.