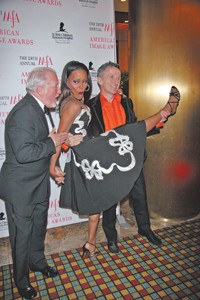 As guests mingled during the cocktail hour, Paul Charron, chairman and ceo of Liz Claiborne Inc., congratulated Boneparth. “Congrats, buddy, been there, done that,” Charron said of his own Man of the Year award, which he received last year. Asked about his plans post-Claiborne, Charron was unsure. “I’m going to stay active, that’s for sure…maybe I’ll get into private equity. I really am not sure yet.”

“This is the new black tie,” she said of her ensemble.

Then it was off to the ballroom, where Thomas’ husband, Phil Donahue, presented her with her award for consistent dedication to St. Jude, which was founded by her father, Danny Thomas, in 1962.

“My wife is being honored again,” he said. “Presenting has become my full-time job.”

Karolina Kurkova was supposed to be up next to present the award to Doonan, but canceled that afternoon, so Doonan stepped in to present it to himself.

“Karolina canceled last minute and this is something she will regret,” Doonan joked. “Apparently, she had to dash back to the Ukraine because of an immigration issue. For those of us in the fashion industry, we know that when a supermodel says this, it just means she is going there for her free dentistry.”

Saying he gave his “pretty years to Barneys,” Doonan accepted his award, mentioning, “I have clawed my way to the middle and I think I deserve this award … I want more awards, many more awards.”

Blake Nordstrom, president of Nordstrom, accepted on behalf of the retailer, saying a quick “thank you to the vendors,” before Betsey Johnson went up to receive her honor.

“I have never been happier in this industry or more productive in my life,” Johnson said, picking up a bag full of watches, swimwear and other licensed products. “Licensing has put me over the top!” she screamed, throwing the items to the audience and thanking her licensing partners, one by one.

Then it was time for a seemingly nervous Boneparth to come to the stage. He was going to wear the 20-year-old tuxedo that he wore to his own wedding to the event, but his teenage daughter convinced him otherwise, he said.

“Fortunately, we had Barneys,” Boneparth continued, explaining that after a shopping spree at the store, he went home with a new tux, tie and shirt. “Thankfully, I have the company discount, because it was really expensive. I couldn’t buy new shoes, that would have put me over the edge.”