New jewelers often approach editors and buyers claiming they want to be “the next David Yurman.” They can’t be blamed — after all, the company is an estimated $500 million business.

But aspiring to reach Yurman’s...

By Emily Holt and Ross Tucker on May 2, 2005
View Slideshow 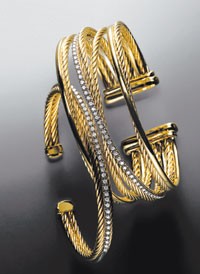 New jewelers often approach editors and buyers claiming they want to be “the next David Yurman.” They can’t be blamed — after all, the company is an estimated $500 million business.

But aspiring to reach Yurman’s success with new and fresh designs is one thing. It becomes quite another when companies start riding Yurman’s coattails by putting out products that look eerily similar to his designs.

Knockoffs have been an issue for Yurman’s firm since he first created his cable bracelet in 1982. The sterling silver look was simple yet distinctive, not to mention an instant bestseller.

It took seven years until a jeweler jumped on the bandwagon and Yurman found himself in his first copyright lawsuit in 1989. Since then, there have been 22 cases filed in Manhattan District Court for copyright infringement. The company has spent more than $5 million in the last five years alone on protecting its intellectual property rights.

Most of the lawsuits have been targeted at small independent jewelers, but a few have involved bigger companies, such as Swiss brand Chariol. The bulk of copyright cases were tried in Manhattan during 1999 and 2000, though nothing has been brought to trial since December 2000.

“I think we shot a big cannon across the bow,” David Yurman said.

But it’s not the jewelers that really put the Yurmans in a tizzy, it’s the retailers that buy the brands making David Yurman-inspired goods.

“I think it’s pitiful that the buyers and merchandisers of certain independents and specialty stores don’t see the difference,” David said. “You can’t really blame them in a certain way…unless they have this education aesthetically and historically, they can’t really make the choice. ”

The Yurmans are deeply involved with their distribution and have been known to personally educate buyers on their signature look.

“How we feel about [knockoffs] is the way the fashion industry feels about it,” Sybil said. “It’s a process of education.”

Still, some stores can’t resist the temptation to bring in another brand that looks like David Yurman but costs half as much.

Yurman attested that one store in particular was encouraging another designer to copy the company’s looks but produce them for a cheaper cost overseas. David Yurman immediately dropped the account and its 30 to 40 retail locations. Six years later, the company and the buyer reconciled and the collection is back in the stores under a new and explicit dealership agreement.

Selling the David Yurman collection and a cheaper one that looks similar to it dilutes the Yurmans’ business at the particular store, the couple argued. So when buyers begin to complain about poor sell-throughs on the company’s pieces, Sybil said she claims no responsibility.

“One of the biggest issues I have is people who trade on the look, where they’re not exact copies, and the stores that we sell to do not make the distinction,” she said. “I have a great deal of difficulty understanding why a retailer would trivialize our look to make it seem as if it wasn’t distinctive or important unto itself. Rather, they should encourage designers, especially young ones, to follow their own visions and aesthetic choices because the more designers who are original, the more it helps the category of jewelry.”

Fortunately, at the end of the day, David Yurman followers tend to be a loyal bunch who can’t be swayed by a lower price.

“Retailers say, ‘they didn’t really want it because it looked like David Yurman. They wanted the David Yurman,’” Sybil added. “That’s what saves it.”