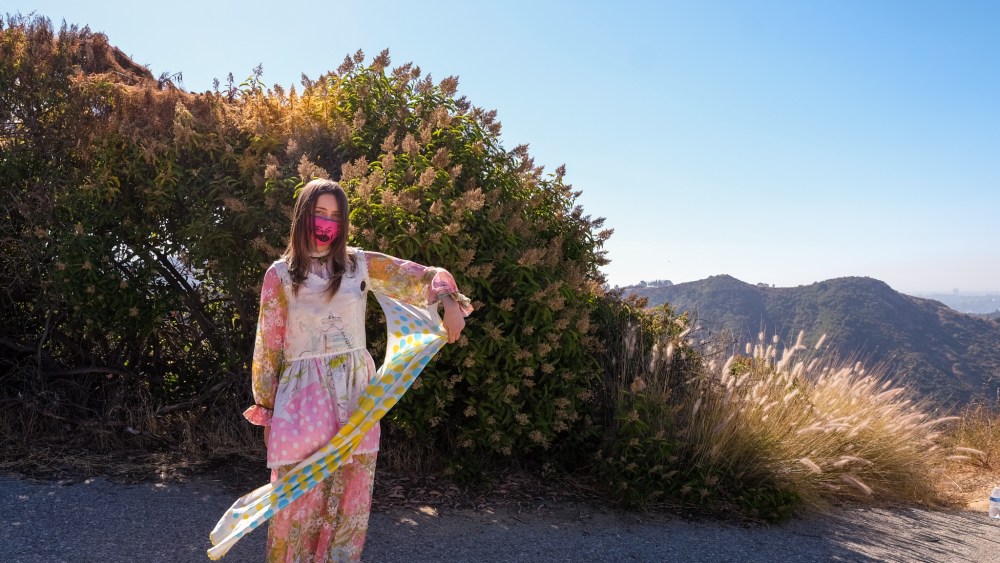 Imitation of Christ has been resurrected.

The conceptual fashion house started in 2000 by Tara Subkoff and Matt Damhave — which rose to fame with before-its-time upcycled clothing modeled by Chloë Sevigny and other famous collaborators during buzzy fashion shows at funeral parlors and furniture showrooms — is back.

On the morning of July 4, Subkoff turned over the label to a new trio of young Los Angeles creatives for a socially distanced show of repurposed fashion at the base of the Hollywood sign.

Titled “Americans Not Allowed in Paris,” the 20-look presentation was the work of Lulu Syracuse, 19; Jersey Bond, 17, and Hudson Schaetzke, 17, all mentored by Subkoff, whose backyard was the backstage. Using friends as models, the designers showed hand-sewn, collaged lace and sequined dresses, deconstructed tailoring, denim, boiler suits and scarves with “Imitation of Christ,” “F** Ice” and other slogans stenciled on the them.

“The young people who worked on the show are protesting for their future,” said Subkoff of the next-generation response to the pandemic and the Black Lives Matter movement. “Their collaborative artwork marries their social justice work.” (Proceeds from an online auction of the one-of-a-kind pieces will go to climate relief and racial equality organizations.)

“It was things we took from our closets that we never wanted to see again,” she explained with a chuckle of the materials used for the collection. “Instead of just negativity and waste, the idea was to alchemize and create something beautiful from what you hate the most. That’s what we all need to do in this time, turn around our thinking.”

Bringing back the label, which has existed for the past decade in an art context only, through performances at the Performa Biennale and Art Basel Miami, seemed particularly timely in this moment of social and political activism, the group said.

“Jersey and I attended many of the protests over the past two weeks.…I’m a photojournalist so I went to document, and we both felt very inspired by the street fashion and people writing on clothes and being surrounded by a younger generation,” said Syracuse, who came to the first IOC show in utero, with her mom, screenwriter Lisa Addario, one of Subkoff’s lifelong friends.

“This pandemic has forced us to think and live in a different way, and it inspired me to switch up how I was making things because I wasn’t able to go to the studio to paint or make sculptures. I was working with what I had, which was clothes in my closet,” said Schaetzke, a student at an L.A. arts high school.

The connection between the depletion of natural resources and COVID-19 was also top-of-mind.

“From the start, sustainability and reusing what we have has been a part of our own brands, so doing that in a time when the environment is falling apart was important for us — to acknowledge mindless consumerism and mindful creation,” said Bond.

The founders want to inspire other creatives who may be feeling claustrophobic in quarantine. “The idea is to create something in our own backyard, create community where you can, local and sustainable — and safe,” said Subkoff.

While proceeds from the first collection will benefit three nonprofit organizations — Fridays for Future, Direct Relief and Black Lives Matter — IOC is looking at being a commercial enterprise. “I’d love to have some female-designed streetwear that looks feminine-masculine but not masculine-feminine, or a more woke ready-to-wear for everyone — hopefully available by September for New York Fashion Week and follow the same thing we did 20 years ago…that went viral before the Internet,” she said, before reminiscing about IOC’s glory days of showing. “Lenny Kravitz and Arianne Phillips and Madonna tried to buy a whole collection, Tom Ford tried to buy a shirt that said ‘Bring Me the Head of Tom Ford,’ and I think he did. A star was born!”

Adding to the one-of-a-kind pieces in the collection shown Saturday, Salma Hayek and Milla Jovovich have worked with their daughters, going through their closets to create upcycled pieces to contribute to the auction. “It’s the voice of the next generation that gives me hope because they care so much about evoking and affecting change,” said Subkoff. “That to me is what’s next.”