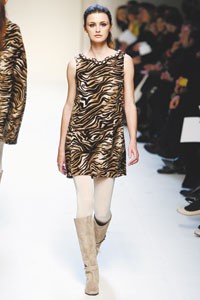 Pollini By Rifat Ozbek: Rifat Ozbek is a fabric whiz, finding ethnic prints and patterns from which his eclectic collections for Pollini flow. For fall, black astrakhan jackets and brocade shift dresses in Ottoman prints were a fun and sophisticated romp, but his overstated nod to Mod didn’t quite stack up to a groovy outing.

Belstaff: Belstaff built its collection around city dwelling and offered shelter from smog with great swing cloaks of various lengths and smart black leather trenchcoats. But what city woman would pair the look with a drab Pilgrim skirt?

Luisa Beccaria: Luisa Beccaria scattered an English garden of roses all over her customary collection of full-skirted organza and silk dresses in shades that ran from soft Wedgwood blue to candy pink. Thankfully, a couple of stunners, such as a long pale yellow dress and a sharp black cape, broke the pattern of those tiresome roses.

Maurizio Pecoraro: After a sobering spring season, Maurizio Pecoraro returned to his kooky draping and miscellaneous mixing. He layered motley fabrics, tasseled bags and floppy violet hats to the point of obsession. Stellar lamé dresses and bejeweled white astrakhan coats could have shone without the added extras.