Miuccia Prada played with graphic cutouts and color for Miu Miu, while Ralph Rucci dressed up his signature styles with braided straps and cording for Chado. 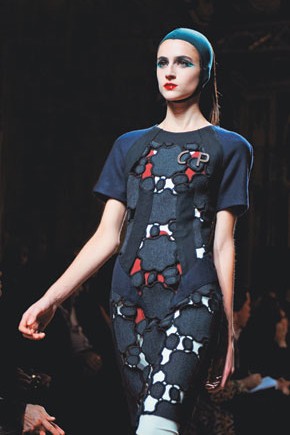 Miuccia Prada played with graphic cutouts and color for Miu Miu, while Ralph Rucci dressed up his signature styles with braided straps and cording for Chado.

Miu Miu: Miuccia Prada loves to leave her audience in the dark. Conceptually, this can be stimulating; literally, not so much. Attendees at Miu Miu arrived to find themselves in a practically pitch-black — and utterly cramped — room, which didn’t exactly set a pleasant mood. And the opening exit — a two-tone thermal onesie, slick and techy in a scuba wet suit way — didn’t exactly jolt them out of that preshow funk.

What followed were variations on that sporty jumpsuit, recast as a zip-up sheath, jacket over biker shorts and so on, while maintaining an athletic-yet-power babe vibe throughout. Another case in point: the jockish perforated mesh top in orange, brown and blue colorblocking. But that bizarre look, severe though it was, began to grow on you, even with everything cut awkwardly — purposely so — with pronounced hips and a rather puckered overall silhouette. It’s a conceit central to the Prada ethos: deliberate weirdness.

Here, it amused more than irritated. Take, for instance, the focus on lace. Prada took a trend she trailblazed back in Milan and made it completely different. Rather than veering austere and ladylike, she made it graphic and Space Age, almost cartoony, in abstract grid, bubble and chevron patterns, and gave it the sequin treatment for night. Accessories, meanwhile, came in the form of galoshes and retro-looking bowling bags. And there is one new soon-to-be-hot trend the designer ushered in: press-on monograms. Each outfit was chicly accented with the models’ initials, like varsity letters. Score one for team Miu Miu.

Chado Ralph Rucci: Ralph Rucci never strays far from his triple A’s: art, architecture and Asia. And while he stayed true to all three in his season-closing fall collection, the mood was lighter and more modern than usual. True, the upbeat techno music that replaced his usual serene tea-ceremony score and the abbreviated presentation — no special couture addendum this time — added energy to the atmosphere, but the clothes also moved in an updated direction, as in a slicked-up vinyl raincoat, pressed with a webby geometric pattern, and several fluorescent green looks. That said, Rucci certainly didn’t abandon his signature aesthetic marked by ultraupscale fabrics and an Eastern flourish. The corded wool jersey dresses, woven leathers, double-faced cashmere suiting and fancy eveningwear were all there. He scaled back in the right places, showing less of the house’s signature face and script prints, while showing more in the way of subdued evening- and outerwear with simple hammered silk dresses and lots of luxe furs. The results will please his existing customers and likely appeal to some new ones in those coveted emerging markets.