In the Know: Menswear News

People, places and things—talking points from the world of Menswear. 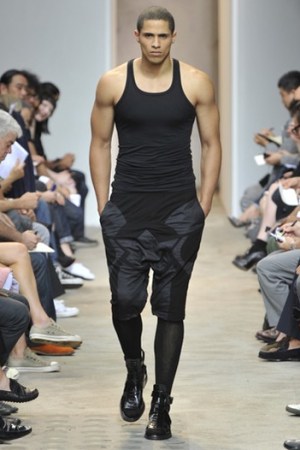 The controversy about the lack of racial and body-type diversity on the runways hasn’t permeated men’s as much as women’s. (Where is the handwringing about impressionable young boys?) There’s an aesthetic dichotomy in men’s that has always produced more diversity on the runways, at least in one sense. Some designers consistently cast fragile-looking, skinny, somewhat interchangeable boys, while others reliably produce a parade of Adonis types genetically blessed with lean muscle and chiseled faces. Recently, Givenchy’s Riccardo Tisci has been forging a third way. He strongly favors non-Caucasian models whose inverted-triangle physiques display a serious and intimidating dedication to weight lifting. This unconventional model is inherent to Tisci’s streetwise vision, rather than a product of tokenism, and it’s beginning to influence editorials.

Next: The high price of commodities >>

The Price Isn’t Quite Right

Fashion’s price squeeze is going to continue for a while. Despite rising commodity prices—a pound of cotton cost 73 cents at the end of April, up from 40 cents a year earlier, and wool increased to $3.51 a pound, up from $2.49—there is little chance that retailers will be able to push higher prices onto skittish consumers this early in the recovery.

“It’s important to note that men’s wear prices have fallen sharply this past year as commodity prices have risen, squeezing margins,” says Charles McMillion, president and chief economist with MBG Information Services. Men’s apparel prices were 2.3 percent lower in April than they were a year earlier, according to the Labor Department’s Consumer Price Index. Compared with five years earlier, April prices were down 4 percent, and in 10-year comparisons, they were 11.3 percent lower.

In the height of the recession, the ability to pass on rising commodity prices was limited by a couple of factors, says McMillion. Overcapacity for producers limited their ability to pass prices along, and retailers, already burdened with large inventories, were also faced with a very sluggish market in which consumers cut back drastically on expenditures as unemployment rose and wages stagnated. As the economy has shown signs of life, McMillion notes, “If job and wage growth continues to improve, then the market condition for retailers and producers will improve. More consumers will have money to go out and spend, and retailers will be able to raise prices and catch up what they lost over the last year.”

Birth Of the Cool

Anyone who has ever made the mistake of wearing a wool suit in the summer owes a thank-you to Joseph Haspel Sr., who founded his brand in New Orleans 100 years ago and with it introduced the country to seersucker, the puckered cotton fabric known for its merciful cooling properties.

Originally a blue-collar fabric, seersucker took on a new role in suit form and came to epitomize Southern casual style under the auspices of the Haspel brand. Preps, movie stars and presidents cottoned to the lightweight suit, as well.

A century later, Haspel, still partially owned by the family, endures as a go-to label for the lawn-party set, but the brand is upping the ante in its anniversary year with the goal of dressing men head to toe and year round. Polos, dress shirts and ties have already joined the line’s range of suits, and this fall, the brand will unveil its first coat collection. Because as much as one hates to admit it, summer doesn’t last forever.

Several other important brands are celebrating milestones in 2010:

• Tommy Hilfiger—The quintessential American designer, who has taken his red, white and blue sensibility to countries around the world, marks his 30th anniversary.

The Things They Said

“I was very surprised because what I knew of Dubai was that it was like Vegas in the desert. And my first question was very direct: Are you sure you want me? Because my style is very minimalistic.”

“I think France is a place to enjoy life, and it’s where people take time—and shopping and dining are two of the most important things.”

—Ralph Lauren on why he likes Paris

—Jean Paul Gaultier of the leather underwear he claimed to be wearing at an amfAR gala.

“I only know two French words: ballet and buffet.”

“It’s now accepted that absolutely no commitment is what the male wants and increasingly what the woman wants.”

“I think [British style] has to do with the weather. We have terrible weather. It’s very gray and drizzly, so we need things to cheer us up.

“When we spoke to men, they told us they care about sex, sports, sex and then their community. Fashion is just not up there as something that drives men.”

“There is no connection between saggy pants and the ability to succeed. Just look at what buttoned-up America has done to the rest of the world and each other.”

“We believe that [David] Hasselhoff’s popularity [or lack thereof] is relevant for the investment community.”

“A lot of companies don’t make jeans for athletes very well. We have a bigger butt and bigger thighs. I think there’s less of an effort to adapt to our body type than to a woman’s.”

—Bode Miller on his personal style

Host of the World Cup in 2014, the Olympics in 2016 and, in the meantime, one of the most promising markets in the world for luxury goods, Brazil is getting ready to do a global samba.

After years of political, social and economic instability, the South American country has emerged as one of the fastest-growing markets for international fashion labels. Global gross domestic product growth is expected to increase 3.6 percent this year, according to a recent report from the World Bank, and the country boasts both a significant middle class as well as a hefty wealthy contingent.

Among the brands that have moved into the country are Ermenegildo Zegna, Missoni, American Apparel, Replay and many others.

The city of São Paulo attracts the most interest from the luxury sector. With a population of more than 11 million, it’s Brazil’s largest city and boasts the largest number of billionaires in Latin America. There are more than 70 malls in the city, the best of which are the Eldorado, Ibirapuera, Iguatemi, Morumbi and the Pátio Higienópolis. But perhaps the most desirable shopping destination is the Rua Oscar Freire, in the Jardins neighborhood, which is home to Louis Vuitton, Giorgio Armani, Montblanc, Cartier, Zegna, Versace and Diesel. Other prominent shopping streets in São Paulo include both the Rua Augusta and the Rua Haddock Lobo, as well as the Alameda Lorena.

Brazil, By the Numbers

Next: Taking inspiration from style icons past >>

They might still be whippersnappers, but they rely on the Old Guard for inspiration.

Three next-generation men’s wear designers go back at least two decades in citing their style icons. “My sartorial hero is Morrissey—more specifically, Morrissey in the Eighties, when he was in The Smiths,” said modernist sportswear designer Patrik Ervell. Meanwhile, for Richard Chai, who launched men’s in 2008, it’s “River Phoenix and Kurt Cobain—for their carefree and effortlessly cool attitudes.” And denim lover Simon Spurr singled out Yves Saint Laurent. Noting that the late designer once said he wished he had invented blue jeans because “they have expression, modesty, sex appeal, simplicity,” Spurr called YSL “the epitome of modern elegance.”

Just 30 years old, Josh Olins has enjoyed an enviably prolific career over the past decade, shooting for pretty much every leading-edge fashion title: Pop, Love, Dazed & Confused, British Vogue, V and Japanese Vogue Hommes among them. This spring, he scored two of the biggest men’s advertising campaigns—Louis Vuitton and Giorgio Armani—as well as the unisex Benetton ads. For fall, he’ll again shoot for Vuitton and Benetton.

A photogenic chap himself, British-born Olins got his start studying photography at Middlesex University, but left school to become a freelance assistant to several top lensmen, including the duo Mert Alas and Marcus Piggott. Encouraged by his older sister, Kim Sion, a well-known fashion photo agent and creative consultant, Olins struck out on his own in his early 20s and found quick success after a breakthrough shoot for Another magazine. Describing his men’s work, Olins says: “With a couple of exceptions, I’d say I always try to capture the character of a very masculine man. Someone who is desired by both women and men alike.”

Next: Suits by Umberto Angeloni >>

Each season, fashion houses try to outdo one another on and off the runway, hoping their latest collections will translate into increased sales. For Italian entrepreneur Umberto Angeloni, that incessant display of one-upmanship is “repulsive.”

“Brands today try to impress by sheer size, by ubiquity, by celebrity association—all things that are completely irrelevant to the renaissance man,” Angeloni says.

Instead, the former chief executive officer of Brioni Roman Style SpA proposes an alternative, or “antidote,” as he puts it. A year ago, Angeloni, launched Uman, a concept wardrobe for the thinking man.

“At the moment, the affluent consumer has a choice between a custom tailor who will make him something very traditional or a fashion house that will make something very seasonal. But nothing relates to his way of life, to his passions, to his skills, to his values,” Angeloni says from his studio in Via Gesu in Milan. “We are building a community to address these concerns and a wardrobe to accommodate.”

Angeloni commissioned a study of 3,500 contemporary men to ascertain the ultimate iconic silhouette created to fit and dress all gentlemen. By average, Angeloni notes, he means “a man of 40 who lives in London, Milan or Paris, successful, on the move and in good condition.”

So far, the wardrobe comprises silhouette-conscious navy suits as well as six “passion jackets,” including an alpine version and even a derivation of a golfing coat.

“We need suggestions and interaction with the renaissance man—we are not sitting on a pedestal and deciding. In a reset world, everything is two-way.”

To fully understand the essence of Uman, you’d need a manual. And Angeloni has obliged. Called Uman, The Lexicon, the book is a six-chapter definition and clarification of the concept, which will be on sale in the fall at Uman corners including Barneys New York in New York and San Francisco, Harrods and Lane Crawford.