In the Limelight: Christopher Kane

The designer is garnering critical and commercial praise and attention from major fashion names. 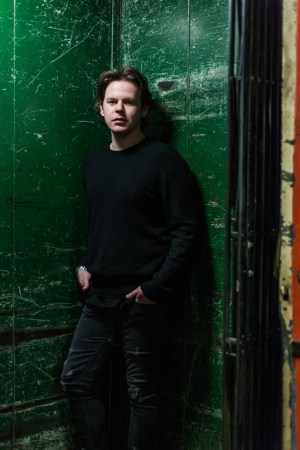 Months before Christopher Kane’s buzzy collection—inspired in part by the curves and coils that make up the human brain—hit the runway in February, he was already London’s new leading man, the commercial breakout success of his generation in the British capital.

In January, PPR revealed it had taken a 51 percent stake in the Scottish designer’s company with the ambition of taking his brand global. The development followed news that Kane was wrapping up a successful, three-year collaboration on Versace’s Versus collection and rumors that he was ready to take the top job at Balenciaga.

Capping his success, the designer put on a virtuoso’s show with enough ideas to propel him through future seasons: The collection featured 3-D camouflage, kilt buckles on coats, pheasant feathers tucked into seams of dresses, lavish fox-fur collars and dresses made from black-on-white geometric shapes like giant paper clips.

The swirling, Art Deco–like collars, butterfly wing and snail-like embroideries all took their cues from the curving surface of the brain and gave a fresh, futuristic edge to the clothes.

“Everyone thought the collection was so big because of the PPR—the Kering—effect,” Kane says from his small, white office at his design studio in Dalston, east London. A pink, sparkly “Happy 30th Birthday” card is stuck on the bulletin board next to him—although he reached the milestone last July—while his sister and business partner, Tammy, is working in the office next door.

“We did the show on the same budget as every other season. It’s not like you sign a deal and the helicopters start landing around you and everything changes!” he laughs, adding he raided his own archives for part of the show.

“This season, we had so much in the back catalogue, we said: ‘Let’s just make it into a story; let’s make it fit.’ As long as I feel confident and I love the product, and as long as it’s so Christopher Kane and you’ve never seen it before, then that’s truly the vision of the brand, and that’s why Kering sees the potential in the business,” he says.

Old ideas, new ideas—the exact moment of conception matters little to Kane, who is so prolific that his sister often has to snatch away his pencil and sketch pad.

“At the beginning of a collection he starts sketching. He’ll do 200 sketches, and I’ll say: ‘It’s enough! We just need 20. It’s time to stop now Chris,” says Tammy.

Her brother, she notes, would go to Milan for Versus with a stack of sketches and virtually be able to wallpaper Donatella Versace’s studio with them.

Now that Kane has moved into Kering’s stable, he’s confident some of those ideas will have their moment to shine. “We’re building a strong archive, a strong heritage and that is so exciting,” he says, “especially for the future prospect of leather goods.”

Kane has done small leather goods in the past, but points out he wants to do proper collections of footwear and bags, now that he’s got the backing.

“I’d love to see a Christopher Kane bag, a staple bag that could carry on for five years, 10 years. We have a rich archive of leathers and fabrics that could easily fall into a bag category,” he says, but he’s in no hurry. “Everyone knows that me and Tammy take things slow. It’s going to be a constant investigation—and if the product’s not right, we’ll hold off.”

And while Kane and his sister have a multitude of plans in the pipeline, they don’t include any celebratory self-purchases to mark the deal.

“It’s been instilled as a Scottish mentality not to flash the cash; we’re always very reserved when it comes to that. We live in Dalston; we work in Dalston,” he says, referring to the neighborhood that is London’s answer to Brooklyn’s Red Hook. “We’re normal people; we come from a normal background. People are still shocked that I have a Scottish accent. But why would I change my accent?”