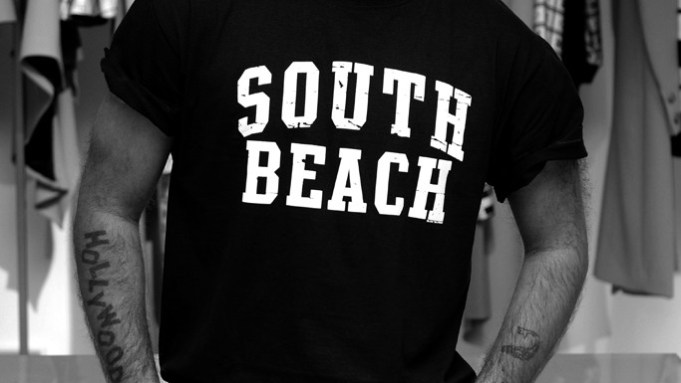 Fausto Puglisi wears his personal story in the form of tattoos.

The shape of his native Sicily—he was born in Messina in 1976—finds a place on his left arm, while his right arm sports the word “Hollywood.” “I had these tattoos done when I was 18,” says the designer, who after high school moved to the U.S. to pursue his slice of the American dream.

Puglisi launched his namesake label in 2010 and was appointed creative director at Emanuel Ungaro last year. He built his fashion reputation in an unconventional way. He began by dressing celebrities, and once he gained some word of mouth, started selling to high-end fashion stores in celebrity-centric enclaves. In his 20s, Puglisi was discovered by such stylists as Patti Wilson and Arianne Phillips.

“I owe Arianne because she unexpectedly started using my clothes styling editorials with Madonna for key fashion magazines,” he notes.

RELATED STORY: In the Limelight: Sacai >>

The Italian-American pop star surely played a pivotal role in the momentum of the Fausto Puglisi brand, as she previously did for other fashion houses, notably Jean Paul Gaultier. Madonna asked Puglisi to design the outfits worn by singers Nicki Minaj and M.I.A. at the Super Bowl halftime show in 2012.

“It was a shock—during the Super Bowl, the entire country is in front of the television. The sacredness of the moment impressed me the most,” Puglisi recalls. For the event, he created two leather gladiator-inspired minidresses—an exaggerated version of Puglisi’s signature staples: bold, feminine frocks embellished with opulent gold embroideries.

Positioned at the high end of the market, with wholesale prices ranging from 200 euros, or $256 at current exchange, for pants to 5,000 euros ($6,400) for embroidered evening dresses, the Fausto Puglisi label is available in 80 stores worldwide. International press and buyers generally tout it as one of the most interesting and promising labels on the Milanese scene.

“I’ve always done what I want, without following any specific strategy or trend,” says Puglisi. “For me, the most important thing is the emotional aspect. It’s amazing when you see buyers getting excited in front of a dress. If you are not a multi-million-dollar brand you must seduce by creating desire.”

The designer says he creates with a cinematic approach, “following a story like a filmmaker follows the script.” He admits he finds significant inspiration in the ancient Roman world, as shown in the peplum shapes and the decoration of his clothes. “I’m obsessed with the Roman Empire. At school, I was very good in Latin and Greek. Being born in 1976, I’ve always looked at that world with the filter of American movies, such as those filmed in Rome’s Cinecittà with Richard Burton and Liz Taylor.”

“He is my idol, the designer who made me dream about the fashion world when I was a child,” he says.
Puglisi’s passion for the Eighties especially emerged during Paris Fashion Week at his first show for Emanuel Ungaro, where he sent out a joyful collection of strong-shoulder jackets and dresses, miniskirts and high-waisted baggy pants.

“Of course, I feel the weight of responsibility but I think that at a certain point you have to put it aside and move ahead,” Puglisi says of his new role. “At Ungaro, I want to bring a new idea linked to freshness, beauty and desirability.”

Aeffe chairman Massimo Ferretti says the company’s goal is to place the Emanuel Ungaro collection in 250 stores within one season. Puglisi defines Ferretti as “an extraordinary coach who is supporting me a lot.”

The stakes are high but Puglisi is counting on strong design skills, a positive attitude and his passion. “I want to enjoy my life, I want less drama and I want to feel the happiness of designing beautiful things.”