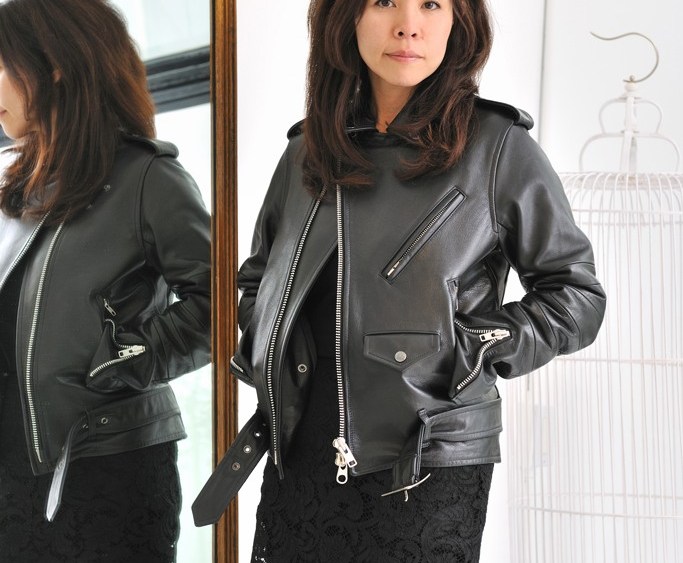 This season, when Karl Lagerfeld was giving previews of the Chanel collection a day ahead of the show, he sported a raw-edged Sacai blazer in a checked wool fabric over his usual Hilditch & Key high-collared shirt and necktie. It was a bit of a departure for Lagerfeld, who is known to wear a lot of Dior Homme.

“Really? I didn’t know that,” Sacai designer Chitose Abe responds to the anecdote, her delicate plucked eyebrows arching in surprise. “I’m so happy to hear that he wore my design on such an important day.”

Well, maybe it wasn’t that much of a surprise. Abe (pronounced Ah-Bay) admits she was aware that she had a fan in Lagerfeld. She says she got wind of the fact thanks to Michel Gaubert, who does the music for both the Chanel and Sacai shows. Definitive confirmation came not long after.

“I also received flowers and a really nice handwritten letter from him about a day before my show,” she says.

That incident was just the latest in a string of fortuitous circumstances that have shaped the last few years of Abe’s career. When Vogue editor in chief Anna Wintour visited Tokyo for a special edition of Fashion’s Night Out in 2011 to show solidarity for a post-tsunami Japan, she made a pointed effort to visit the designer’s showroom.

“I had never met Anna Wintour, and I really wanted her to see my clothes, so I was really excited…Everyone was told that she didn’t have much time, so we had to be very quick,” explains Abe, dressed in a black biker jacket of her own design and sporting vivid royal blue nails studded with tiny crystals. “But surprisingly, she was very interested in many things. She asked a lot of questions and we talked for a long time.”

Abe says the attention from Wintour and Lagerfeld has definitely helped catapult her brand into a higher level of international recognition. She struggles to come up with any other logical explanation as to why her 14-year-old business has suddenly become a major talking point for editors and retailers. Although Abe declines to disclose sales figures for her brand, she says sales for her spring collection nearly tripled and fall orders are shaping up strongly.

“I’ve had a relationship with Colette, for example, for about 10 years; I’ve been in Barneys New York and many other really good stores for about 10 years. But even though the buyers and the shop people knew the brand, it never created this kind of buzz,” she says.

Abe studied at a fashion college in her native Nagoya, a large city west of Tokyo that is perhaps best known as the home of Toyota. She then entered the business as a designer at Japanese fashion giant World before moving on to work for Junya Watanabe at Comme des Garçons for eight years. She launched her own company—she remains the sole shareholder—in 1999. The name Sacai is a derived spelling of her maiden name, Sakai.

“One thing I really felt while working there was that the things you make have to have originality,” Abe says of her time at CDG. “[Rei Kawakubo’s] ability to do both business and creation—that was one really great thing that she taught me.”

Some observers might be surprised to hear that Abe’s fall collection, which appeared to reference English countryside classics with its windowpane plaids and rich velvets, was actually inspired by Tokyo.

“Japan is very specific,” the designer explains. “For example, people in the U.S. might wear very casual clothes during the day and then dress up at night, but in Japan people tend to wear the same styles from morning to night.”

Like past collections, it featured numerous examples of Abe’s design signature: her expertise at splicing together contrasting fabrics and garment elements to create unique but still wearable hybrids.

When she started Sacai, “the things I was wearing were all very ordinary, like shirts, V-neck cardigans, sweaters and motorcycle jackets,” Abe says. “So I thought I would make these things that were very ordinary standards—but standards that you couldn’t find anywhere else.”

Sacai currently has just one freestanding store, a boutique in Tokyo’s Aoyama district. Abe also sells through 125 stockists, including 35 in Japan. The designer hints that she hopes to open another store at some point, but she stops short of saying where it would be.

Abe is similarly opaque when it comes to her plans for growing her brand and fails to go into specifics: “That’s a secret.”