In the Spotlight: Eye on Tokyo

Three local designers to look out for. 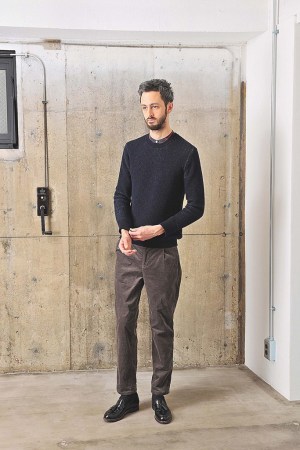 Three Tokyo designers to look out for.

History: This brand was started in 2000 by London Institute (now University of the Arts London) graduate Yusuke Yanagi, when he was working as a freelance designer. Now 37 years old, he took full control of the brand’s sales and business activities when he established his own company in 2008.

Design philosophy: “Rather than taking inspiration from something and then making things based on that, I make clothes by thinking how I want them to feel when they’re completed. Then, in order to materialize that, I use my own know-how.”

Key takeaway for the season: “I really think a lot about the use of color in my clothes,” Yanagi said, pointing to a navy blue raincoat that looks almost iridescent in the light due to the contrasting ways the fibers take to the dye.

History: South Korean Bajowoo — he goes by the single moniker — was unable to find punk-inspired clothes in his conservative home country so he started making them for himself and later for local bands. After dropping out of Esmod Seoul, he worked at a leather factory, served in the army and bummed around London for six months. Bajowoo, now 29, launched his own line two years ago while a student at Sugino Gakuen, a fashion school in Tokyo. He graduated in March.

Design philosophy: Bajowoo’s connection to the punk world anchors his creative direction. The brand name references the fact that society marginalizes punks as 1 percent of the population, but at the same time punks consider their own culture to define 99 percent of themselves, he explained.

Key items for fall: Four coats done in collaboration with Mackintosh, motorcycle jackets, slim zippered utility pants, thick-soled shoes made with George Cox and an apron loaded with so many safety pins that it resembles medieval chain mail.

Key takeaway for the season: Bajowoo is still nursing a sore arm. “I attach the studs by hand myself, and up until now I’ve done about 480,000 or 500,000 of them. I’m going to the hospital now because of that,” he said with a laugh.

History: This 39-year-old Osaka native studied fashion design at Philadelphia College of Textiles & Science (today Philadelphia University) and worked with Robert Danes for four years before returning to Japan and starting his own brand 10 years ago.

Design philosophy: “Each time, I think of things like creating combinations that people can’t imagine. I use concepts that people would normally never approach,” Kubo said, referring to his men’s take on a Chanel jacket and a seemingly abstract graphic print he developed for fall from a photo of basketball players.

Key takeaway for the season: Kubo and hairstylist Shinji Konishi developed a series of helmetlike wigs for the brand’s fall show, tapping into the collection’s sporty theme. “When I do my fashion shows in Tokyo, I show a rhythm — a kind of timing — just like a theatrical company would. I think that’s the reason for having a fashion show,” he said.