From fine pleats to floral prints, certain houses have specific signatures, which designers developed further this season. But other firms are still looking for one. 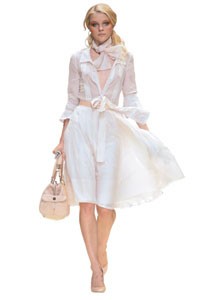 From fine pleats to floral prints, certain houses have specific signatures, which designers developed further this season. But other firms are still looking for one.

Celine: Newly installed Celine designer Ivana Omazic had the sun in the morning and the moon at night. In between those corny celestial renderings that opened and closed her show, she had a whole lot of merch packed into 47 exits, and piece by piece, some of it looked quite good. A seemingly endless parade of looks with names like “Venus Picnic dress,” “Luna Safari combi-short” and “Sun Parade skirt,” not to mention five swimsuits, came all decked out with floppy hats, sunglasses, big necklaces, bigger bags and inexplicably, a few pairs of knee socks. Among the show’s strengths, much of the sportswear had a snappy attitude, and a pleat-front voile shirtdress brought a distinctive softness to the season’s shirt trend. But such is not enough to carry a collection.

Like its sister company Givenchy, Celine is a house in search of a raison d’etre. And like her colleague Ricardo Tisci, Omazic must contend with the reality of an audience brand-bored by past failed reinventions. Her fault — no; her challenge — absolutely. And one almost impossible to address in a single season, especially for someone at the design helm for the first time after years of assisting others. But Celine’s clock is ticking, with only so much patience in the communal fashion consciousness.

Sophia Kokosalaki: Now in her third Paris season, Sophia Kokosalaki has made her very particular sartorial vernacular familiar to many. Her spring show had no shortage of the looks upon which she built her young house: expertly draped pleats that either snaked tightly about the body or fell fluidly. The best of these were at the front end of the show in a fresh palette that ranged from milky whites to quiet mossy greens, grays and nudes. An austere white jersey dress with an inventive hem tucked up into an inverted U-shape was chic and evidence that Kokosalaki is fending off stagnation while still working in her oeuvre.

She cut her pale cottons into polished shapes with just the right touch of detail — clothes that could transport a girl from Sunday afternoon in Santorini to Monday morning in New York. Two washed leather jackets are sure to be a delight for retailers with a cool-girl clientele. In fact, these looks carried off her intricate work far better than a series of sculptural evening dresses in silk that looked heavy and ill-fitting. A brief flirtation with a black-lace boudoir number was similarly unwelcome.

Hussein Chalayan: Hussein Chalayan’s audience-friendly venue was the Carrousel du Louvre. His rebel roots provided the live electric guitar accompaniment. His political-mindedness led to an impressionistic lemon print, a show of support for disenfranchised Turkish Cypriots whose plight was described on the literature placed on every seat. His mysterious theme was “heliotropics.” So there was plenty to ponder even before a single look came down the runway.

And for Chalayan fans, that’s the point. No one simply rolls out of bed and slips into his clothes, because doing so is a very deliberate act. Come spring, it will be an act of defiance. For example, look one: a lovely white suit with draped lapels and thickly padded hips, a bulk that progressed with similarly blighted pants and plumped-up tap shorts that could have made J.Lo blush. Then, just to really throw off his audience, Chalayan showed some very sexy harnessed cocktail dresses, as well as those decorated with plush coils as thick as velvet ropes.

While many designers have gone the safe, quiet route this season, Chalayan maintained his sense of adventure, even if the ideological weight of his agenda was often more than even his complex clothes could bear.

Cacharel: Cute, lighthearted designs with a heavy emphasis on floral prints are the delightful fare one has come to expect from Inacio Ribeiro and Suzanne Clements at Cacharel. They didn’t disappoint for spring, mining a Polynesian theme they hoped would “open like a suitcase full of tropical treasures.” That meant dresses, shirts and jackets emblazoned with colorful prints of island flora; easy, low-slung pants; silk sundresses with ruffles, and sexy knit bikinis. Then they took a detour up north with prints of “curious [imaginary] creatures” by Finnish artist Klaus Haapaniemi, who also decorated the surreal fairy-tale set that was the backdrop for the show. The result was a cheeky sweater with a funny-looking cat and linen skirts embroidered with a baroque motif. Just the stuff the Cacharel girl is sure to love.

Loewe: Since taking the reins at Loewe, Jose Enrique Ona Selfa assuredly has aligned the house with its Spanish roots while developing its leather heritage. This season’s effort was full of enough lace to outfit an army of flamenco dancers — and some leather jackets, too. Lace was inset on a black dress, trimmed tops, or was embroidered in tone-on-tone motifs on quilted jackets. For day, high-waisted pencil pants, jackets with shoulder details and skirts with darting flourishes were on the menu, many of them in suede. Bows — enough to wrap a hundred presents — finished off dresses, jackets and tops. While some looks were unfortunate — short suede jumpsuits come to mind — Ona Selfa’s wearable clothes served his house well.