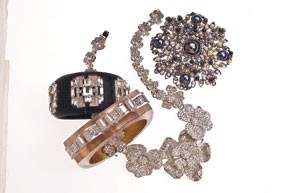 The category is experiencing a resurgence that hasn’t been seen since the Eighties. On the runway and at retail, brands such as Balenciaga and Lanvin are taking major steps into the category, and along with smaller brands are establishing oversize statement pieces as a seasonal trend. In addition, firms like Banana Republic, Coach and J. Crew are buffing up their fashion jewelry offerings to add the next level of “lifestyle” to their branding efforts.

In today’s shaky economy and with the cost of gold and silver skyrocketing, it’s clear why consumers are gravitating toward jewelry that is on-trend yet lacks a hefty price tag. Costume jewelry has become the entry-level price point for many of Europe’s luxury houses, and in troubling times allows consumers a guilt-free way to tune-up their wardrobe.

“The economy makes things much sweeter for fashion jewelry,” said Michael Coan, associate professor and chair of the jewelry design department at the Fashion Institute of Technology. “People who would look to buy something fine between $3,000 and $5,000 can find a similar and even more avant-garde piece in fashion for $100 to $200. In times of trouble, people want to splurge, but not on a fine piece of jewelry. Paychecks don’t reflect it, but if you have an extra $50 you might buy a funky ring.”

Gabrielle Fialkoff, chief operating officer of Miriam Haskell, said, “We’ve always said that in an economic environment that is difficult, women love to purchase jewelry. She may not buy a new outfit, but certainly will buy a piece of jewelry to express the fashions of the season.”

“Nowadays, with the economy the way it is and the cost of gold so exorbitant, when my pieces translate to retail, it’s very expensive,” Ross said. “Coupled with the fact that you can have a fresh look that’s in fashion for $200, it’s easier to swallow.”

Economy aside, some say the fashion jewelry trend is simply another turn in the accessories cycle. According to Clare Sauro, assistant curator of accessories at the Museum at FIT, consumers “have been so focused on accessories in the last decade that to focus on big pieces of fashion jewelry is a natural outgrowth of the handbag and shoe fixation we’ve had.”

The backlash of the “It” bag phenomenon has also opened up new opportunities for other accessories. As the euro has risen, so has the price of handbags produced in Italy by the likes of Fendi, Chanel and Prada. The aspirational customer is now thinking twice before spending over $1,500 on a handbag to key into trends.

“The bag looks tired to me,” said jewelry designer Gerard Yosca. “How much more can you say with a bag right now? Costume jewelry looks more one-of-a-kind and it’s about the jewelry, not about the name.”

Fialkoff said, “Women still love bags and shoes, but we’ve had a fabulous run of those categories and now jewelry is seen as fresh and new and different. It’s offering her newness that she hasn’t purchased as much of in recent years.”

“On a fashion level, the economy has nothing to do with it,” Bittar said. “People aren’t going into the fashion jewelry market because of the economy. It has to do with fantasy and bringing back the great opulence from previous decades. Nicolas [Ghesquière] at Balenciaga isn’t saying, ‘There’s a recession, let’s do fashion jewelry.’ They’re thinking, ‘What can we do that is a true sense of fashion?'”

While there may not be one right answer, retailers and consumers are getting in on the costume craze. According to Ed Burstell, senior vice president and general merchandise manager of jewelry and accessories at Bergdorf Goodman, the specialty store has picked up six new designers for its renovated jewelry department due to open in May. The store also plans on housing four more costume brands on its contemporary floor and will pair the runway jewelry by Marni, Yves Saint Laurent, Balenciaga and Lanvin alongside their respective handbag collections.

“It’s a big initiative for us,” Burstell said. “And it’s across the contemporary and designer board, so it’s going to hit at every level. That’s what we’re excited about, a larger common denominator.”

Scott Shram, general merchandising manager of accessories and apparel at Henri Bendel, reported that costume brands such as Tom Binns, Miriam Haskell and Diana Broussard have outpaced all other accessories at the store.

“It’s taken on a bigger role,” Shram said. “We’ve added additional resources and additional dollars to jewelry on the third floor and we’re integrating it with our designer apparel.”

Alison Loehnis, vice president of sales and marketing for Net-a-porter.com, said the e-tailer has tripled its costume jewelry business in the past year.

“We will continue to source the most relevant and sought-after brands to provide our global customer base with access to an array of exciting, carefully edited products,” she said. “For fall 2008, we have a number of new brands within our jewelry offering. We are excited to be stocking Bottega Veneta, Alex Bittar and Alex Monroe.”

Jewelry designer Philip Crangi and Karen Erickson, founder and designer of Erickson Beamon, both said Barneys New York is increasing its buys for next season. Danielle de Marne, women’s fashion director for Scoop NYC, said the specialty store chain picked up a wealth of new lines for spring and even added a private label collection, Scoop Beach, that features jewelry. She attributed the costume jewelry rage to the pages of US Weekly and In Touch that make celebrity favorites available to readers in a way that monthly fashion magazines never have.

“Everything is so much more accessible now, thanks to the gossip magazines,” de Marne said. “You know what this person is wearing and where to find it. Jewelry has gotten a huge hit from that.”

But some designers are sensing a general fear on behalf of buyers not looking to take chances and place huge orders in today’s retail climate.

“Some of my stores are very nervous about ordering,” Yosca said. “They’re ordering late or lighter. But the funny flip side is that everybody that has gotten a collection in has reordered in two days. If they take the leap of faith, they’re selling it.”

Crangi, who was recently lauded for his fall collection with Vera Wang, agreed costume jewelry getting a lot of attention, but isn’t exactly damaging the superfine market.

“The $5 million Harry Winston customer isn’t hurting for cash, but for us, our $200 to $400 level is doing phenomenally compared to our fine jewelry at $2,500 to $15,000,” Crangi said. “Barneys said they believe in the costume moment and they love those price points. It’s easy to sell and to sell as multiples.”

Kenneth Jay Lane has been in the business for over 45 years and has had everyone from the Duchess of York to Jennifer Lopez donning his over-the-top costume pieces. According to Lane, the category has always been around to serve even the wealthiest of women who could easily afford fine jewelry.

“Rich women love to wear my fake diamond necklaces,” Lane said. “If a woman has a very valuable piece of precious jewelry, she’s worn it so many times, that it’s like putting on the same dress over and over again. It’s a matter of change. Plus with insurance costs, taking a $1 million piece out of a bag can cost thousands.”

Only time will tell if costume jewelry will see the same backlash as the “It” bag, especially since iconic luxury brands have joined the mix. Costume jewelry is yet another category where firms like Louis Vuitton and Marni can create branded “It” necklaces.

“You can tell when someone is wearing a YSL or Lanvin necklace,” said Roxanne Assoulin, creative director at Lee Angel. “Costume jewelry has become signature and has brand awareness. But that’s great. There’s excitement and fear right now, but I feel lucky to be a part of this trend. To be in the company of these amazing designers is huge. It’s an amazing step for costume jewelry.”