In Tune: Digging for Roots

A new generation of performers is getting back country music’s twang by bowing to its grande dames. 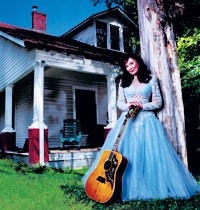 Growing up in a nomadic family in the vast, sparsely populated Nullarbor Plain of Australia, Kasey Chambers wasn’t exposed to television, radio or glossy magazines as a child. Her father’s country music record collection was one of the Chambers clan’s few nods to modernity, and Kasey eagerly listened to her dad’s Carter Family, Hank Williams and Rosanne Cash platters. So, when Kasey was 12 and her dad took her to see Lucinda Williams open for Cash in Adelaide, an entire world seemingly opened up before her. To young Kasey’s ears, Williams’ mix of Dylanesque folk, Delta blues and classic country was “like nothing I had ever heard in my life — a woman singing her own songs, with her own sound. It was so powerful, and I knew that was what I wanted to do.”

Fast forward 14 years, and Kasey Chambers found herself listening to her idol once again, but now it was as Williams laid down a harmony vocal on Chambers’ song, “On a Bad Day.”

“I was trying to be really cool,” says the singer-songwriter, 28, from her home in New South Wales, “but inside, I was screaming, ‘Lucinda Williams is singing my song!’ I was just beside myself.”

The resulting album, “Barricades & Brickwalls,” made the sweetly voiced Chambers Australia’s first international country-rock crossover star. Tours with Williams, who will be putting out a live album this fall, and country legend Emmylou Harris followed, and Chambers is now promoting a new collection of assured, rootsy music, called “Wayward Angel.”

Chambers isn’t the only country-oriented artist taking her cues from the genre’s grand dames, however. Country artists who have stayed in the spotlight by singing about their authentic life experiences rather than giving into the prepackaged slick hegemony of contemporary country radio have inspired a fresh crop of truth-seeking musicians.

“Just look at Gretchen Wilson,” says Billboard senior writer Deborah Evans Price, referring to the 31-year-old “Redneck Woman” songwriter, whose debut album of back-to-basics country, “Here for the Party,” has sold more than two million copies since its release in May. “Her success would’ve been unthinkable a couple of years ago, when Faith [Hill]’s and Shania [Twain]’s glossy pop was dominating the country charts. People are looking for something that’s real.”

In June, Loretta Lynn released “Van Lear Rose” to tremendous critical acclaim. The record’s stirring juxtaposition of rough-hewn blues rock — supplied and overseen by The White Stripes’ Jack White, who produced the album — and Lynn’s venerable twang introduced the 69-year-old coal miner’s daughter to a whole new generation of fans. A longtime Lynn acolyte, White has covered her songs and even dedicated his band’s third album, “White Blood Cells,” to her.

“Loretta was breaking down barriers for women at the right time, and writing all of her own songs,” White told the New York Times earlier this year. “Loretta was doing it earlier than that, and in the country realm, where a lot of women weren’t able to do what they wanted. I don’t think anyone has the natural songwriting ability she has inside of her.”

Lynn hardly considers her appeal a mystery. “I sing about real life,” she says, “and I think people can relate to those kinds of songs.”

Evans Price agrees. “Loretta’s as country as corn bread, and proud of it,” she says. “There’s an honesty and integrity at work there, and listeners — regardless of their age — just respond to her directness.”

Case in point: When polymath chanteuse Neko Case, 33, was casting about for tunes to include on her forthcoming live album, “The Tigers Have Spoken,” she immediately thought of Lynn. “I rediscovered Loretta in the mid-Eighties,” says Case, who also sings with Canadian indie-pop faves

The New Pornographers. “My world was filled with fake-political, macho-guy, stupid hard-core bands. Then I heard [Lynn’s infamous 1975 birth-control song], ‘The Pill.’ She was so much more punk than those guys could ever dream of. I was vindicated.”

Case had been covering another feminist anthem of Lynn’s, “Rated X,” in concert for eight years and thought it was a perfect fit for “Tigers.” Adopting some of Lynn’s trademark sass, Case says of the song, “Making fun of the institution of marriage feels just a little bit too good.”

Covering a country pioneer can even lead to a career — just ask Nashville singer-songwriter Mindy Smith, 31, who decided to cover Dolly Parton’s “Jolene” for a Parton tribute album last year, joining Alison Krauss, Emmylou Harris and Chambers on the track listings. Smith had little idea how the song’s composer would react, but Parton was so taken with her rendition that she helped Smith get signed to Parton’s label, Vanguard. “I stuck to my guns, and we found each other,” says Smith. “No one knew me until the tribute, except maybe a few people in Nashville. She heard me for the first time singing her song and believed in me.” Smith’s moving “One Moment More” album bowed in January of this year, while 58-year-old multimedia mogul Parton shows no signs of slowing down, releasing a new double-CD live album and DVD, “Live & Well,” later this month.

Of course, any artist would love to stick around as long as Parton, Williams and Harris have, and Chambers has picked up a tip or two about the long view from her heroes. “I think their longevity comes from their doing what’s true to them,” says Chambers. “They’re not following trends or making records for the radio. When Loretta or Emmylou change their styles, it’s because they’re challenging themselves, doing what they feel like. And while that might mean that it takes a while to find success, it means that when you do succeed, you’ve done it on your own terms.”

Indeed, having done it on her own terms, Lynn has this advice for younger musicians. “I always say you got to be first, great or different. If you’re one of them, you might make it.”