All the teased hair, slashed spandex and camp posturing of Eighties headbanger rock is again proving its mettle. 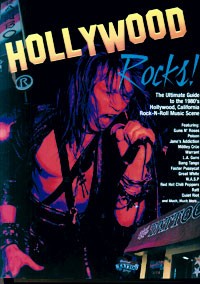 Maybe having another Bush in the White House is contributing to the flashback. Or

maybe the only vintage that’s still affordable is the dregs of this most fiendishly cartoon chapter in rock ’n’ roll fashion.

No matter, Eighties heavy metal is back, and it has enthusiasts once again raising their flickering lighters above their heads and lip-synching to Ratt.

U.K.’s The Darkness, which is reviving the art of Spinal Tap with its world-domination schtick, is the most mainstream manifestation of the so-kitsch-it’s-cool-again appeal of heavy metal.

But Aqua-Net central is fittingly at the Roxy on the Sunset Strip in West Hollywood, where every Monday night the Metal Skool event bangs into session with an evening that is part spoof, part nostalgia. Even the DJ is Taime Downe, former member of the band Faster Pussycat and co-founder with Riki Rachtman (of MTV’s “Headbanger’s Ball” fame) of the legendary Eighties-era Cathouse club.

The house band, also called Metal Skool, perfectly simulates the Eighties metal acts that were once gods on the Strip. These guys deliver it up, as they have for the past four years, drenched in animal-print spandex. The bassist pouts and dramatizes his long wavy locks with the help of a fan perched at the edge of the stage, while the singer, a dead ringer for Poison’s Brett Michaels, and the lead guitarist banter cheekily between songs.

Watching a hard-core, tattooed punk rocker in the audience singing his heart out along with the band to an old Mötley Crüe hit hilariously reveals his true musical predilections. In fact, there are plenty of scenesters who get decked out for the occasion in long-haired-wig-to-high-top-toe metal drag.

And having real metal heroes such as Aerosmith’s Steven Tyler, Kiss’ Paul Stanley, Meatloaf and a host of younger stars sing their greatest hits with Metal Skool really has to be a dream come true for its members.

“Here, nobody is embarrassed about showing they love these songs. It’s a very inclusive scene. And there’s lots of pretty girls,” says Josh Richman, at the helm of the collaborative team behind the night. The cane-toting Richman is also co-owner of the event-planning collective the Alliance. During a recent Metal Skool evening, a crew from Spike TV’s “I Hate My Job” followed Richman around as he “mentored” an episode’s contestant.

”People are just rediscovering the value of these mindless, fun songs. They really are great pop,” says Dayle Gloria, a scene veteran whose club Scream, open from 1985 to 1989, was a launchpad for everyone from Guns N’ Roses to Jane’s Addiction, and who continues to keep her ear tuned by booking the opening bands for Metal Skool.

“People are drinking, having fun, not worrying about being PC. It’s a throwback to the

Those glory days fill the “Hollywood Rocks” tome recently published by Cleopatra Records. Among the rare photos and even rarer gig flyers splattered across the 210 pages are such gems as a print ad for a fledgling hairstylist featuring a large photograph of a very young Guns N’ Roses.

Come spring, the sights and sounds in the book will also be offered in box sets of DVDs and CDs.

“Almost 18 years later, there’s definitely the nostalgia factor at work,” observes Cleopatra’s owner, Brian Perera, who as a teen was weaned on the Strip and its nightly action. “But the songs have good melodies, good hooks. Think of it: Someone like Britney Spears could do ‘Sister Christian’ by Nightrider. It could top the charts.”

She could certainly pull off the Confederate flag bikini top and faded denim cutoffs mugged by one peroxide fan in the photo album “Too Fast for Love” (PowerHouse Books), in bookstores this month. New York photographer David Yellen clocked 30,000 miles in his red Nissan 300ZX in 2000, snapping the colorful disarray of tailgaiting ticket-holders at concerts for Poison, Dokken, Kiss and other metal acts. The portraits are also on exhibit at the PowerHouse Gallery in New York starting Sept. 10.

“If it had been the Eighties, I would’ve been one of those people in the photos,” admits Yellen, whose lens typically focuses on musicians and athletes for editorial, and Cingular cell phones and the History Channel for his commercial work. “It was like going back through my teenage years.”

The best fans, at least visually, were at the Poison and Cinderella shows, he recalls. “They would take more chances with their clothes. You know, the guys in the zebra-print shirts versus the Iron Maiden fans, where the most they do is the patches on their jackets.”

In common, however, was what got them there and why, according to Yellen. “There was a lot of hardship in these people’s lives, and they really got a lot out of going to these concerts. I wanted to portray them with a sense of respect.”

Yellen’s Technicolor moments of metal minions — from porn-ready groupies backstage to mullet-coiffed fans in the parking lot — might have occurred a decade after metal’s initial Sunset Strip heyday, but the fans don’t seem to know, or care.

They don’t even look that different from the fans captured in the 1986 cult phenom “Heavy Metal Parking Lot,” a 15-minute low-fi documentary that has made the rounds as multiple-generation copies on VHS tape and is now available on DVD. (It also spawned this summer’s Trio network reality series “Parking Lot,” expanding its fandom domain beyond metal.)

The ongoing allure of heavy metal, says Cleopatra’s Perera, is that “it was a decadent time, and people want to have a little bit of that back in their lives. Besides, if you take something away long enough, it starts looking good again.”