In Tune: Living on a Prayer

Christian performers are tapping into the latest fashion trends — but modesty is still their creed. 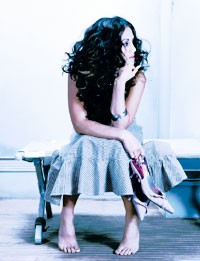 Christian groups such as Switchfoot and Jars of Clay are enjoying a broader demographic and even feel free to wear ripped jeans, tank tops and piles of jewelry. But modesty still rules, and a few commandments remain.

Among them: Thou shalt not bare midriffs.

Indeed, the Christian record industry has relaxed its unwritten dress codes enormously over the past decade in order to make its artists more appealing to a young audience. One longtime creative director remembers a time when bare shoulders were strictly forbidden, and skirts were often airbrushed in photos to add length below the knees.

“There’s been a real opening up with the realization that a young audience would pay more attention if the artists looked more like them,” says Christiev Carothers, president, Everything Visual, a Nashville styling and imaging company.

However, among today’s hottest Christian acts, fans would be hard pressed to find a bare belly button in the bunch.

“We’ve gone to amazing lengths, from bodysuits, layering, even safety pins, to make sure our midriffs don’t show,” says Kristin Swinford of ZOEgirl, a Christian pop group. “Parents were so upset by their daughters emulating Britney Spears’ look and sexy moves.”

Tricia Brock, one of two women in the rock group Superchick, says modesty for her is as much a matter of dignity and self-esteem as Christianity.

“Our message to girls is to embrace your unique personality and be proud and comfortable in your own skin,” she says. “We take care to dress modestly, because we know girls in the audience will often dress like we do.”

Brock describes her style as “glam-rock punk with a European edge.” It’s a look she cultivates by shopping at places like Urban Outfitters, where she can find miniskirts and tank tops that she layers over pants and shirts. She adds Converse All-Star shoes and lots of jewelry, especially big earrings. The mix has proven a winner for her.

But while many Christian artists support the religious value of modesty, they find that walking the line between respecting their fans’ needs and being able to express their own individuality is precarious.

Lisa Kimmey, of the Christian R&B/pop group Out of Eden, says the band never shows bare stomachs or cleavage, but sometimes that’s not even enough. The group drew flak after the 2002 DOVE awards, when Kimmey wore an off-the-shoulder Betsey Johnson fitted gown. “It wasn’t even tight,” she laughs.

“I was naive, and when I wore tight jeans or spaghetti-strap tops, I heard about it,” she says. “I wouldn’t wear midriff-baring tops anyway, but sometimes at autograph sessions, parents will say something if I wear a top and the shoulder slides off. I don’t let it stress me out. I don’t want to offend anyone, but I’m 19, and I want to look fashionable, too.”

Everything Visual’s Carothers agrees that it’s a challenge to be edgy without relying on sex. “Without sex to sell an image, Christian artists often have to push harder to look fashionable,” she explains.

Out of Eden’s Kimmey agrees. She knows that sex would be an easier sell, but she likes the challenge of looking cool without baring skin like her mainstream counterparts.

“Modesty is not a fundamentalist, Quaker approach, or being covered up head to toe,” she says. “We’re into looking good.”

For Kimmey, that means funky combinations, such as tweed crop pants, pony-print boots by Michael Kors, a turquoise ribbon-tie blouse and a brown leather motorcycle jacket. “There are so many bare stomachs and breasts that singers often look more like Victoria’s Secret models,” she says. “We love fashion, love designer labels, but we’re singers, not Sports Illustrated swimsuit models.”

Both shop trendy retailers such as Urban Outfitters and Wet Seal, but also scour stores like Wal-Mart or Target for plain T-shirts or skirts that they can rip up or embellish with sequins, rhinestones or leather trim.

“Modesty is becoming more of a trend than a statement,” she says.

While American pop culture will never abandon sex as a selling tool, some say perhaps it has gone as far as it can go — at least for now.

“The mood is more toward natural and authentic now,” says Carothers. “T&A is tired.”