Indie girls are getting polished up as grunge fashion loses steam. 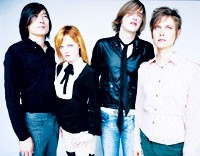 They have band names such as Dressy Bessy, Crème Blush and the Maybellines. They go on stage wearing high heels, short skirts, ruffled blouses and ponytails. Most of all, they live to rock out. They’re the new indie princesses who are bringing high style back to the hallowed halls of grunge.

“When I first began reporting on the Seattle scene in 1990, I spoke to a publicist there who said that every musician in Seattle was a boy, even if they were a girl,” explains Ann Powers, curator of Seattle’s Experience Music Project and former music critic for the New York Times. “It was just a boy scene. Girls wanted to blend in to be taken seriously. Now, girls don’t have to blend in with the boys to be respected.”

Laura Rogers, the darling drummer of the New Wave sibling act The Rogers Sisters, who are celebrating the September debut of their sophomore record, “Three Fingers,” agrees. “I was in an indie band in the Nineties,” she says. “We were very against having our image shown on anything. It was the time of third-wave feminism, and it was important to be taken seriously as a musician, not using your sexuality for promotion. Now, it’s totally different.”

She adds, somewhat sarcastically, “People back then were trying to do interesting music; they didn’t have time to go shopping.”

Many credit rock’s favorite train wreck, Courtney Love, with giving girls the guts to trade in their wool skullcaps for designer dresses and sparkling tiaras, as well as Riot Grrrl bands like Bikini Kill. But it’s recent indie phenoms like Meg White of The White Stripes and Karen O of the Yeah Yeah Yeahs who have really begun exposing a new kind of rock feminity to mainstream MTV viewers.

Powers says these musicians are simply responding to the larger world in general, despite their focused audience appeal. “Right now we’re in this moment of stripper mania,” she says, alluding to musicians like Janet Jackson, Lil’ Kim and Foxy Brown. “If you were a musician and you were to come out there wearing flannel, you would just look like you’re from Mars.”

Fashion designer Anna Sui, who wardrobes indie chicks The Donnas as well as soloist Melissa Auf der Mar, agrees that indie musicians are reacting to a new kind of overt culture. “In the Nineties, everything was about anti-Establishment, anti-money. Now it’s more accepted to be successful and be a celebrity. And some young women are so savvy at this point that they know designers will just throw clothes their way.”

For the music industry, this marketing savvy could mean the saving grace for indie rock, which many say is on its way out, not only due to the dwindling number of radio stations willing to play it but also due to lagging concert ticket sales, the biggest casualty of which was this year’s Lollapalooza tour.

“When there’s so many options for entertainment, it seems that people who are trying to attract attention would go about it through fashion,” says Howard Kramer, curator of Cleveland’s Rock and Roll Hall of Fame and Museum.

But for the fans, there is the fear that when musicians play by the mainstream rules, the outsider angst upon which indie rock was built will become undermined.

“Indie rock has this organic quality, like we’re growing it in the backyard or something,” says Powers. “It needs to hang on to that edge. If you’re Karen O and you’re suddenly dressed by Calvin Klein, it would be betrayal.”

While some would already say crossover indie forces like Karen O have sold out, Karen O for one does forgo wearing big-name fashion designers for up-and-comers like Christian Joy. So does Marcy Bolen of Motor City’s the Von Bondies who, along with bandmate Carrie Smith, is frequently getting approached by designers based on the success of their recently released “Pawn Shoppe Heart.”

“Antifashion got a little old,” she says. “Now I like to really, really glam it up.” For her that means sticking with thrift store finds, as well as discoveries at little boutiques. The two designers she does works with are the small L.A.-based Material and the Australian-based Lover.

Tammy Ealom of Dressy Bessy, which is back in the studio working on a spring 2005 release under new label Transdreamer Records, takes it one step further and designs her own looks. “I love secondhand stuff,” she says, adding that she starts her day nearly four times a week visiting any one of the hundreds of thrift stores that surround her hometown of Denver. “I scour the dress racks of the Salvation Army. I love polyester dresses. If I find a great polyester dress and the pattern is just amazing, but it’s below the knee, I just shorten it. I change the buttons. I update it.”

And what about the boys whose presence was once so omnipotent as to dictate androgyny? Well, as Powers points out, “Even Kurt Cobain was never that comfortable with how cute he was. He always played it down. But boys are excited again to be cute. Just look at The Strokes. Boys want to wear the fashions, too.”

Sui, for one, says it’s time for the change. “I’m excited that people are dressing up again. It’s part of what rock ’n’ roll is all about. It creates movement. It creates trends. It creates a scene. That’s the most exciting. “