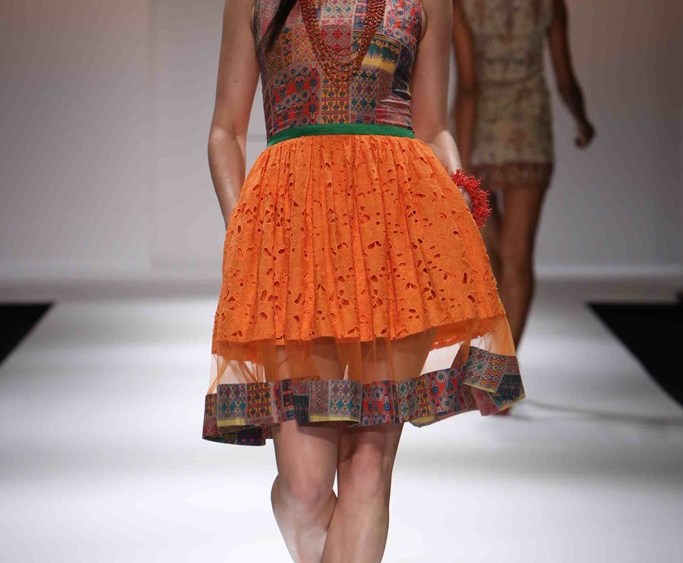 NEW DELHI — The five-day Wills Lifestyle Fashion Week had more designers than ever as well as a greater emphasis on business.

Organized by the Fashion Design Council of India, or FDCI, the leading government body for fashion in India, the twice-yearly event, which closed Oct. 6, has been a growing draw for domestic buyers and those from the Middle East and Japan. Coming at the end of the fashion weeks in New York, London, Milan and Paris, this time it was like a moment of reckoning for dedicated buyers.

“People already plan it into their budgets,” said Sunil Sethi, president of the FDCI. “It is an investment in fashion with a difference, which is factored in already.”

The fashion with a difference has often meant not only the creativity and innovation of Indian designers, but also the embroidery, crystals, sequins and handwork that characterize Indian design.

Deepika Govind, a Bangalore-based designer who did not show at the event but had an exhibition stand, is known for her play with textiles.  She said there were many buyers from the Middle East and India but the market for plainer designs is growing, too. “I have three stores of my own and have withdrawn supplies from multibrand stores,” she observed.

“I would say that the Indian market is now better than any other market I have been selling to,” said designer Niki Mahajan. “Earlier, 80 percent of our business used to be international and now it is about 60 percent. I think it is soon to be about 50 percent for international as the domestic business is growing fast.”

Sethi said the fashion week was larger than before, with more than 132 designers participating.

“Fashion today is becoming more relevant than ever,” he explained. “The market is changing and the event is serving a need. There are a lot of new designers emerging from here and our focus is clearly on business.”

With the couture week organized by FDCI held in August, it also precluded some of the higher-end designers.

There has also been a concerted effort to maintain a higher standard for the event. As Mahajan, who is an FDCI board member, observed, “We did a more careful screening of the designers presenting at the event.”

Both the opening day and the finale had an unusual element: the first day finished with a showing of Indian designers with a Dutch collaboration. As Suneet Varma, a well-known designer who collaborated with Dutch designer Jan Taminiau, said, “At our first meeting, we were wondering how to go about it and simply looked at each other and said, ‘What should we do next? Shall we draw?’ But it evolved very well.

The same show had another Indo-Dutch collaboration between Rahul and Rohit Gandhi, who worked with the label called Died done by Dutch designers Diederik Verbakel and Marieke Holthuis.

As for Indian designers, Kallol Datta showed a starkly white collection that focused on silhouette and what he called “antifit”; Ankita had a series of variations on the sari using hand-woven textiles as well as structured jackets and pants in bright colors imbued with bead work and mosaic techniques; Viral, Ashish and Vikrant showed summer dresses, caftans and robes inspired by Marrakesh, and James Ferreira’s soft, muted colors with a base of ivory were done in soft drapes with hand-painting by Bhamini Subramaniam on soft cotton voile, cotton satin, crepe de chine and silk jersey. Gauri and Nainika are known for their gowns and this time their monochrome collection was made in heavyweight micro crepe infused with diaphanous hand-loomed organza, while Gaurav Gupta also worked with draping in neon shades of pink, red and green and Wendell Rodricks took the audience through an imaginary nautical journey from Goa to Shanghai using the theme to bring out both traditional style costumes of Goa to those of the Chinese samurai.

• The focus was clearly on femininity and draping, from James Ferreira’s collection with cherubs and Ganesha, to younger designers such as Vaishali S.

• Bright colors predominated but whites, creams and yellows and more solid colors were a change. Trims and embroidery were prevalent, such as the tribal-inspired collection by Ankita.