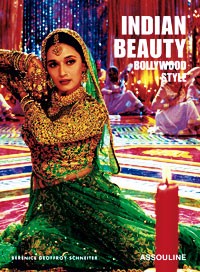 NEW YORK — When Diana Vreeland said, “Hot pink is the navy blue of India,” she wasn’t kidding. Designers from Oscar de la Renta to John Galliano have dipped into the country’s jewel-toned palette.

“Bombay Dreams,” an outsized spectacle, at once satirizes and celebrates Bollywood, replete with Busby Berkeley-style production numbers spiced up like fiery vindaloos. The show features classic themes, such as forbidden love, rags to riches and good conquers evil all rolled into one.

Anisha Nagarjan, who plays the liberated filmmaker in love with the hero, Akaash, dresses in tunics and pants while her rival, the Bollywood star Ayesha Dharker, wears kitschy outfits that show lots of cleavage and bare skin.

“Kandukondain Kandukondain” (“I Have Found It”), an Indian director’s take on Jane Austen’s “Sense and Sensibility,” is a send-up of Bollywood filmmaking, where the two beautiful sisters and their three admirers break into song and dance at critical dramatic moments. The movie, which is on the Cinema India program, has all the melodrama of “Romeo and Juliet” and more costume changes than a Janet Jackson video.

A.R. Rahman, who is known as the Mozart of India, provided the scores for “Bombay Dreams” and “Kandukondain Kandukondain.”

For the series, Welt Vatsal includes art house dramas and documentaries, along with classic epics such as “The Braveheart Will Take the Bride,” which continues to play to packed movie houses in India after eight years.

“There’s a lot of crossover between the fashion world and Bollywood,” said Welt Vatsal. “The biggest female actress, Aishwarya Rai, is a former Miss Universe. Beauty contests have become a really big thing in India.”

Rai, who is the heroine of another film, “Devdas,” and plays the young impetuous sister Marianne in “Kandukondain,” is the face of L’Oréal on the subcontinent.

Long before Galliano referenced India in his fall 2003 Christian Dior collection and Jean Paul Gaultier based his 2000 spring couture on a trip to Delhi, Victorian women threw paisley shawls over their shoulders to bring color and levity to their rigid dresses.

Many designers — including Paul Poiret, who produced a harem collection in 1909 — have been touched by India’s brightly hued splendor.

“Indian beauty has never stopped being a source of inspiration for designers because it manages to put women on the level of goddesses,” said Bérénice Geoffroy-Schneiter, the author of “Indian Beauty: Bollywood Style” (Assouline, June). “It doesn’t concern itself with daily life and its realities.”

The reason for the appeal of Bollywood films and the style they exude is simple, said Geoffroy-Schneiter: “They bring a joy and an immediate sense of the exotic. They tear us away from the mundane. I call them syrupy sweet candy for grown-up children.”