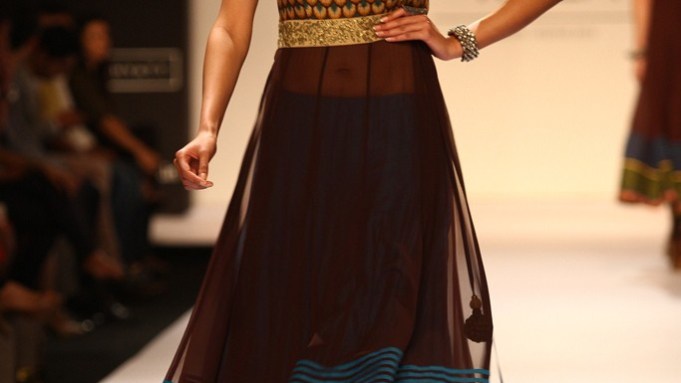 MUMBAI, India — The versatility of Indian textiles was in the spotlight at Lakmé Fashion Week, held here from Aug. 23 to 27.

Silks sourced from throughout India with special attention to the weaves, chiffons and georgettes replaced the overwhelming bling of previous seasons. The colors were darker, dresses and gowns much fuller and designers showed both restraint and more thought. This sensibility was apparent in both the NexGen, or the younger designers that LFW is known for encouraging, as well as more established names.

The finale by Sabyasachi Mukherjee, who came back to the event Tuesday after a five-year gap, best summed up the season: a touch of class and a sense of royalty, and a selection featuring both Indian and Westernwear. He said it was about the vintage look and kept his signature style in which the woman is “feminine, dynamic and strong with minimal makeup.” Although gowns appeared to be the main motif throughout the week, Sabyasachi showcased these along with shorter styles.

Particularly enticing were the fabrics used in the shows by Krishna Mehta and Soumitra Mondal. Inspired from the eastern state of Manipur, the silks in Mehta’s collection were traditional and tribal, in a burst of colors ranging from crimson to purple. She also used wool and tweed in a range of simple silhouettes that drew attention to the fabric even through the different forms — skirts to flared pants to saris.

Soumitra Mondal’s collection was also a play with fabric with handwoven and khadi silks in black and gray. The weave of the fabric held center stage with delicate beadwork and embellishments.

LFW stressed the need for silhouettes to differentiate themselves from Western styles. At the customary textile day, Rahul Mishra, who won the Woolmark award for India and the Middle East last month, said that designers were slowly moving closer to experimenting with their roots and this was growing with the understanding “that we don’t have to ape the West. It is important to let fashion evolve with new silhouettes, colors and styles to reinvent timeless art,” he said.

Designer Anamika Khanna added to the sentiment, saying that cultural roots should be worn with pride.

There was of course the usual showing of more Western silhouettes, with an emphasis on embroidery, especially for formalwear.

American fashion designer and retailer Michele Bohbot showed Tuesday, drawing attention for his pencil skirts, sequined shorts and the final piece — black pants with a one-shoulder blouse with sheer windows worn by Bollywood actress and former Miss World Priyanka Chopra. The label has just launched in India with Reliance Trends, giving it a leg up in the retail market.

Some designers complained about the number of sponsored shows, commenting that these diluted the designers’ creative freedom. On Tuesday, four of the six shows were sponsored.

There was also plenty of glamour. Vikram Phadnis’ collection in gold, ivory and white used embroidery to distinguish it. The silhouettes were diverse — jumpsuits and pants, the skirts in tissue, jackets in a variety of fabrics including lamé, sequin sheeting, net, jersey and lace.

Troy Costa’s collection allowed men to have fun too with denim jeans with formal, colored jackets and printed shirts. These were followed by two-tone brocade jackets and tuxedos in textured velvet. Helping to create the sharp, slick look of the Thirties were the models on the runway as well as the live singer and the Shillong Chamber Choir stationed within the audience and coming up unexpectedly with the spotlight, and a deluge of vocals.

There was plenty of activity in the Talent Box area, where the designer booths as well as runway shows by fledgling designers had more interest from buyers than ever before.