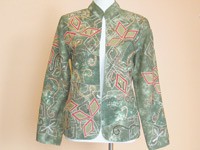 Wholesaling at about half the price of its traditional fare, the new line targets retailers that have pursued Indigo Moon but were wary of the price point. The new line will sell under private label, as well as the Alex K label, an existing Indigo Moon brand that also will continue to sell at the higher price point.

“The new line will broaden our retail options,” said Debra Conwell, senior vice president of Indigo Moon. “It’s advantageous to opening price points at our existing client stores, in addition to [retailers] who were looking to do business with us, but who needed the line to be more affordable.”

Conwell sees Belk, Kohl’s and Target as potential new buyers, and she hopes existing clients, like Von Maur and Nordstrom, will also pick up the new line.

Pieces from the lower-priced collection will wholesale between $17 and $22. The company, which specializes in novelty pieces with embroidery and embellishments, is cutting wholesale prices almost in half — its other lines wholesale between $28 and $42 — by reducing the amount of ornamentation and using less-expensive fabrics.

Indigo Moon, which does about $30 million in volume annually, projects that its lower-priced line ultimately will bring in a third of its business, said Conwell.

Indigo Moon sells under the Entice, Amarje and Julia K by Indigo Moon — named for owner and designer Julia Klyashtorny — labels in department stores, and uses its eponymous label exclusively with QVC.

The new line’s first collection, for spring 2007, will bow in August and will show at WWDMAGIC in Las Vegas that month.