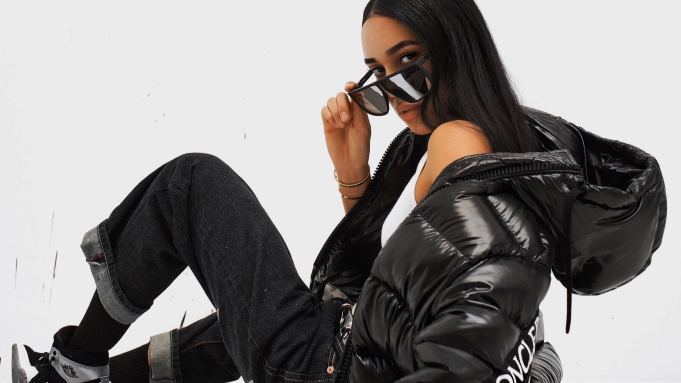 At 25 years old, Aleali May is the second woman to collaborate with the Jordan Brand, and the first to release a pair available in men’s and kids sizes as well. The first woman to codesign a pair of Jordans was Vashtie Kola, and that was in 2010.

“We had to get the approval from Michael Jordan. I mean, first of all when they told me, I said, ‘I won’t be able to sleep tonight,'” May said in an interview. “That’s the part that I love about it, too — he’s [Jordan] hands on with it. I already loved the brand as a kid and just hearing something like that is exactly why.”

Today, her much-anticipated Aleali May Air Jordan 1 “Satin Shadows” hit a very select number of retailers worldwide, including RSVP Gallery in Chicago; Kith New York and Brooklyn; Xhibtion in Cleveland; Social Status in Pittsburgh; Nike Lab NYC in the U.S.; Si Vas Descales in Madrid; One Block Down in Milan; Kickz in Berlin, and a handful of Jordan stores throughout Asia. The style is a limited edition, with only a “couple thousand” pairs produced, May said. The $160 sneakers — $120 for grade-school sizes — won’t be available online.

When detailing her design process, May said the use of corduroy was non-negotiable — she even toyed with the idea of making the sneaker all corduroy — but she ultimately settled on a careful blend of gray satin and black corduroy uppers offset with a gray chenille swoosh. The satin is twofold: It’s a riff off vintage LA Kings and Los Angeles Raiders Starter jackets as well as an homage to the Royals and Breds, two satin limited releases that dropped earlier this year. Each was produced in such limited quantities that it was nearly impossible to get a pair. “There were like 300 of them so the whole sneaker world went crazy,” May said.

“The thing with the vintage jackets is that you’re doing sportswear, too, [and I like] when it ties back, especially to a sport because it is sportswear. I didn’t want to make it too fashion-y. I wanted it to play both sides,” May explained.

She was very clear that although she wanted the project to be about her designs and embody her personal style, incorporating where she’s from and her roots was integral to the project.

“I grew up in South Central…[like] ‘Menace II Society,’ ‘Boyz n the Hood’ and ‘Training Day.’ That’s where I was born, the same type of environment. It’s not fabricated,” May said, adding: “I want to do this not only for me but for L.A. We don’t have our own Jordan either so I wanted to say, ‘Look I don’t know who’s coming next after me, but let’s capitalize on this moment and make this for the city.’”

She also designed a second pair of shoes — “Millennial Pink” Jordan 6’s — that are even more limited than the Satin Shadows. These won’t even be for sale, as only 40 were made for May’s “friends and family.”

“[My designs are] a representation of my personal style….I blend both luxe and streetwear,” May said.

She maintained that her outfit posts on Instagram garner the most engagement, where she might wear a Chicago Bulls jersey one day and Chanel or Y Project the next. She’s now a fixture at fashion weeks, too, and earlier this month, she attended the Maison Margiela, Sacai, Chanel, Kenzo, Off-White, Moncler and Yohji Yamamoto shows in Paris.

A video of her “Millennial Pink” 6’s on Instagram last month received almost 800 comments, twice the number an influencer with more than a million followers could see on a post. (May has just 200,000 followers on Instagram..

When asked why she thinks that is, May’s response was simply: “Quality over quantity.”

She quickly elaborated: “It’s the culture supporting the culture, and the kids who are following us are the kids a few years younger — in the streets, in New York, it’s real life put on the Internet. They are either next or right now, or you have some of the OGs. The youth support the youth OGs.”

She listed Don C, cofounder of RSVP Gallery, and his wife, Kristen Noel Crawley, Virgil Abloh and Ibn Jasper as the “OGs,” especially for women in streetwear. Additional OG’s of streetwear for May also include “avant-garde icons” such as Raf Simons, Yamamoto, Rick Owens, Issey Miyake and artists like Takashi Murakami and Brian Donnelly, aka Kaws.

“We call it ‘the Youth.’ We’re these fashion kids, we’re the last generation to basically see what it’s like to not have Internet and then have Internet,” said May, articulating that the term embodies a confluence of skate culture, hip-hop, streetwear and surf. She labeled Stussy another OG brand of street culture.

She expounded on this movement, which she still refers to as a subculture because it’s still “very small.” For May, it dates back to 2009, when Kanye West was “Young Kanye” — wearing Polos and a Louis Vuitton backpack and touting himself as a “Louis Vuitton don.”

“It was how he [West] was blending street brands with high-end brands. That’s where that whole thing started. And Nigo [in Ura-Harajuku] from A Bathing Ape — him and Pharrell [Williams] together, I feel personally was the start of what this youth couture is,” May said in her confidently unfiltered way. “Mind you, rappers were influencers then. We didn’t have influencers yet. They were the voice for, ‘This is cool, y’all should mess with this.’”

But long before the term “influencer” became widely used to describe anyone who could communicate and engage with a sizable social media following, May started to chronicle her goings-on via Tumblr. Once she graduated from college, she put roots down in Chicago, where she also went to school and where she first worked at a Louis Vuitton store and then at retail concept RSVP Gallery, which became fodder for her blog posts. It was during her time at RSVP Gallery that she learned about sneaker culture and she started to build a sizable following online.

She moved back to L.A. in 2014 and quickly picked up modeling gigs with Stussy and Vans and styled Kendrick Lamar and Tinashe, but still in her early 20s, May remained unsure about what she wanted to pursue professionally.

“My Instagram or my Tumblr was more of a display of what I was doing and it was not like I was posting to get money, and then it naturally started happening and that’s when I started seeing the word ‘influencer,’” May said. “I had no idea when people started calling me that. That sounds kind of weird to go around saying you’re an ‘influencer.’”