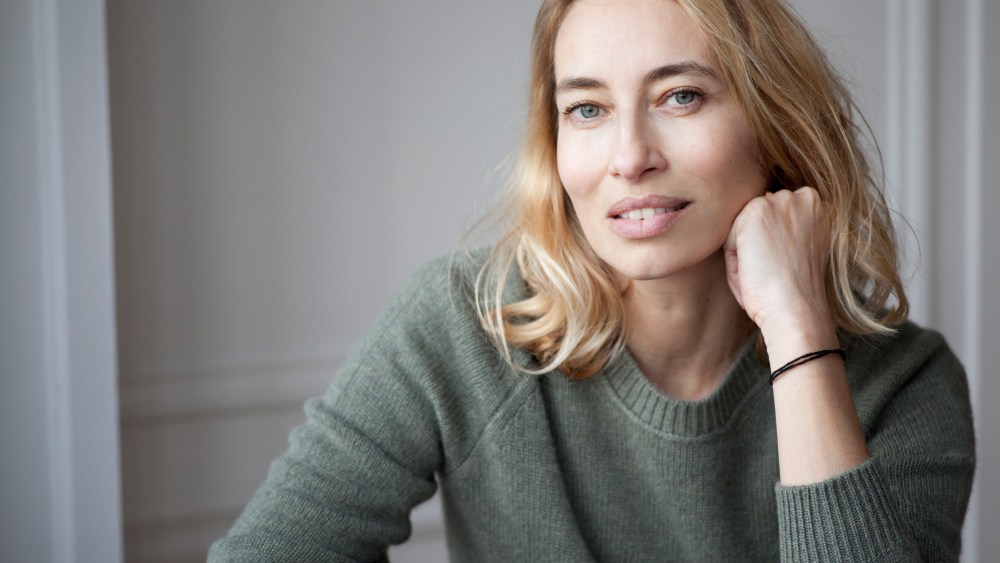 A Parisian with Russian roots, Golovanoff — a front row fixture who has spent much of her career interviewing fashion’s biggest names, and counts the likes of Charlotte Chesnais, Hermès’ Véronique Nichanian and Sonia Rykiel’s Julie de Libran among her inner circle — recently stepped on the other side of the camera with the launch of her namesake cashmere label.

“For years I’ve been a TV host, interviewing people about fashion, sitting at the shows, waiting for the shows, being very critical. We’re exposed to so many beautiful things that we lose sense of how hard it is to do it. I asked myself, ‘OK, if you had to do something, what would it be?’” said Golovanoff, who opted for a category she felt comfortable with, having grown up with a mother who loved to knit clothes for her and her two younger sisters.

“Because of my mother, I know how to knit — very badly, very slowly — and I’m fascinated by the idea of being able to make something from a piece of thread using needles. It’s an ancestral technique,” the designer said.

“It’s a challenge, you’re opening yourself up to criticism. But I felt I couldn’t be a spectator for all my life, that I was ready to take the risk,” added Golovanoff who was also motivated by another nostalgic sentiment: a yearning for clothes that are meant to last.

“We didn’t have cashmere as kids, but we had qualities that you could wear yourself then pass down to your two sisters and still after that, pass on to another kid. It’s a bit like finding an old sweater in your granny’s wardrobe. It’s not even necessarily that soft, but in terms of quality it’s perfect. That’s what I wanted to do.”

With collaborations with Colette and The Webster under her belt, this season the designer, who works with a heritage Scottish cashmere mill for her line, will present a capsule with heritage French furrier Yves Salomon, based on five cashmere pieces with accents of mink and shearling. Highlights include the signature Mila sweater with a shearling gilet, and an ivory cable-knit sweater with fur piping details. Prices range from 750 euros to 1,900 euros.

Having started out with two styles and five colors in 2016, her cashmere line, meanwhile, has grown to incorporate a bigger range of fits, including her first oversize sweater, leggings, jogging pants and accessories, including “e-gloves” with removable fingertips for “when you need to answer the phone during New York Fashion Week in a snowstorm.”

Stockists include Le Bon Marché, Tsum in Moscow, Browns in London and Joyce in Hong Kong.

Here WWD talks to Golovanoff about style, the fur debate and social media habits, with 62,300 followers on Instagram.

WWD: What are your social media platforms of choice and why?
Alexandra Golovanoff: I am mostly on Instagram because I’ve always loved the visual purpose of it. I also like the idea of producing my own content.

WWD: What is the first thing you check in the morning and the last in the evening?
A.G.: My phone, to see what time it is.

WWD: What kinds of posts elicit the most engagement? What gets people going?
A.G.: Pictures of me wearing beautiful clothes, holding a puppy, hugging a big Hollywood star at the sunset on a beach.

WWD: Who do you follow and why?
A.G.: I mostly follow people I know and like to keep in touch with; museums to see masterpieces; fashion people or brands to keep up to date; decoration because it is my hobby.

WWD: What up-and-coming platform holds the most potential and why?
A.G.: I don’t see anything yet…do you?

WWD: Who inspires you in terms of style or beauty?
A.G.: Photographers, designers, architects, painters…

WWD: When it comes to social media, how do you decide what to share and what to keep private? How much is too much?

A.G.: It depends on my mood, but I keep my private life private: husband, kids, parents, friends…most of the time. I decided to have my kids model my sweaters, now that they are getting older, but it was a big move for me. Too much seems to be relative, I don’t like vulgarity and lack of [modesty], especially when there is no other [motive] than getting “likes.”

WWD: There are so many clichés around Parisian style. Having grown up between Moscow and Paris, what’s your take?

A.G.: A Parisian is French. You can have someone from Marseille or Lyon or Bordeaux and she’s almost Parisian. But Paris is the capital so we put all French women in the Parisian basket. What we have, maybe, is a sense of confidence, with the way we are, the image we project. We don’t try to be perfect. One day you feel good, and the next, maybe you didn’t sleep well, your hair is messed up, but it’s OK. It doesn’t change the perception you have of yourself. The first day, when you feel good, you might wear something audacious, but the next you’ll wear your favorite slouchy pant, but you do it very naturally.

We pretend we don’t care that much.

WWD: Take us through your outfit today.

A.G.: It’s very gray and sad, and it’s a Monday. My duvet cover this week is old rose and I felt like I wanted to stay in my bed this morning, so I put on my [old rose] Céline cords that are too big for me, but they were the last pair so I had no choice. With baggy pants, you need chunky shoes, and it’s raining and I have a lot of appointments, so I’m wearing my Alexander McQueen sneakers. Then the oversized sweater is mine.

WWD: How do you feel about Phoebe Philo leaving Céline?

A.G.: [Faux sob] I’m so sad. I’m so disappointed, it was unique. The quality, the vision, it’s niche, it’s beautifully made, the fabric, the details, the shape….Nothing is left to chance. Everything has been thought through. And I don’t think anybody else is capable of doing that.

WWD: What do you expect from Hedi Slimane’s arrival at the house?

A.G.: It will be totally different. It will be mass, for a lot more people, a very big business. And why not?

A.G.: It’s bigger than my bedroom. My bedroom is tiny; my wardrobe is huge. I have too many items. I have a complete wall of shoes from the floor to the ceiling.

WWD: You’re a shoe fetishist? What are your favorite brands?

A.G.: Pierre Hardy — and Berluti for their cowboy boots, I love cowboy boots. I can’t wear heels anymore as I had a ski accident two years ago. I like to have flats or almost flat but with strong personality.

A.G.: I like to shop when I travel. I buy jeans and T-shirts. The last pair I bought was from Frame in SoHo. And I like to buy jeans at APC. They have a butler program where you can swap your old jeans [and buy new ones at half price].

All my T-shirts are the same: James Perse. I wear sweaters and pants — either jeans or nice pants by Céline — every day.

WWD: What do you think about APC returning to the fashion calendar?

A.G.: It’s a smart move, they were precursors of anti-fashion and contemporary fashion, they influenced labels such as Isabel Marant and AMI [by Alexandre Mattiussi]. They have a pure, strong vision and have always stuck to it.

WWD: Where do you like to shop in Paris?

A.G.: I still love Le Bon Marché, I think they have the best choice and it’s not too big, and it’s cozy and chic.

WWD: Regarding your capsule with Yves Salomon, how did the debate around fur affect your choice to work with them?

A.G.: I’m totally conscious of it but when you’re from certain cultures, like Russia, where it gets so cold, you wear fur. It’s functional. I have pictures of myself in Moscow, at three years old, in a fur coat. And it had nothing to do with money, it was to do with being protected from the cold.

I grew up all my life with [a positive image] of fur. But mentalities are changing a lot. I’m a vegetarian, and I have a dog; I love nature and animals, but it’s something very personal, and I don’t like people giving lessons about it.

I think the business of fur is much cleaner today. I have also known the company since a long time and they are true professionals in the domain.

I don’t wear fur in the same way that I used to, though. I’m OK with shearling, I feel comfortable with it. I wouldn’t wear obvious fur now, but if someone wants to, it’s not a problem.

A.G.: There were some incredible moments with Karl [Lagerfeld]. After every Chanel show, when everybody was gone — I was always the last person waiting for him — we would go into the production truck and sit in front of the screens to watch the show, filming Karl with his running commentary. When it came to his catwalk bow, he would always say: “How do you find me? What do you think of my jacket? Not bad, no? My mother would be proud.”