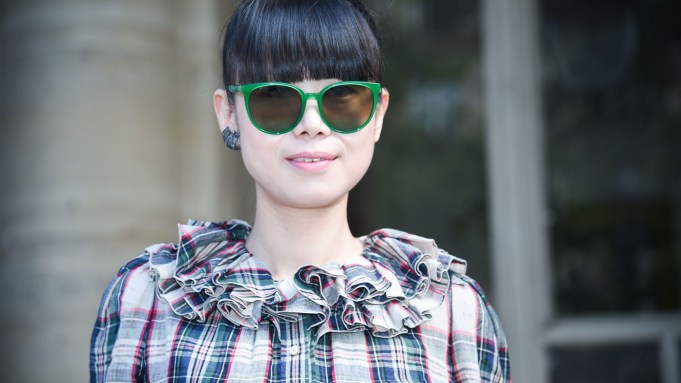 SHANGHAI — As senior fashion editor of Elle China, Leaf Greener’s style credentials were already cemented in her homeland. But it was a chance encounter with photographer Scott Schuman during Milan Fashion Week in 2008 — and the resulting images of her style on his site, The Sartorialist — which brought her to the attention of the wider world.

She quickly became a favorite of street style photographers, including friend Tommy Ton, at international fashion weeks, and after leaving Elle China in 2014, she launched her own digital magazine on China’s WeChat platform.

Today, Leaf, the magazine, has 20,000 subscribers. Each issue digs deep into the theory of design, sometimes with designers and luxury brands — such as Hermès, Chloé and Loewe — but also with other creatives. The current issue, for example, focuses on the work of Spanish architect Ricardo Bofill.

Greener also acts as a consultant to a number of Chinese brands and foreign labels looking to make a mark in the Chinese market, particularly helping them negotiate the country’s unique social media sphere.

Her international exposure has been helped by her Instagram account, which has in excess of 160,000 followers, even though the platform is blocked in her home country.

Over a burger in Shanghai’s leafy former French Concession district, Greener told WWD about her idols — Diana Vreeland, Rihanna and Leonardo da Vinci — and spoke about fashion’s ability to communicate across cultures and the difference between an opinion leader and a blogger.

WWD: In addition to WeChat and Instagram, what other social media do you use?

Leaf Greener: Just those two, although I have a Weibo account [with 750,000 followers]. I just registered Twitter as well, but I haven’t used it yet.

WWD: Why do you like WeChat and Instagram?
L.G.: I love Instagram because I am a visual person — I’m a stylist and art director, so I love creating images and communicating through images. I use WeChat because I felt like it was the only practical way to launch a digital magazine.

I love print, but I don’t want to do a monthly magazine, I think that’s over. In the future, I would like to do a yearly bookazine, with a really cool concept and content and design, something that people could keep forever.

WWD: What posts create the most engagement?

WWD: Is there a difference in what Chinese and Western audiences like?

L.G.: Actually, it’s the same. It doesn’t matter if they are Chinese or foreigner, everyone wants the total look.

WWD: What do you think about China’s rising KOL [key opinion leader] culture?

L.G.: In China, people can be confused between KOL and bloggers. I don’t have a blog, I am not a blogger. Xander Zhou is a fashion designer, he isn’t a blogger, but he is a KOL who can talk and give his opinion and influence people. If you don’t understand the difference you will miss out on using [opinion leaders] and communicating with their audience in the best possible way.

WWD: You are a street style star, stylist, luxury brand consultant and digital magazine publisher. Which of these roles garners the most influence?

L.G.: I’m not [Leonardo] Da Vinci, but he was a painter, sculpture and scientist and he influenced people by doing each of these things. I want to be him. That’s my goal. For me, I am doing a lot of things, but each thing I do send the same message. It’s all part of a whole package with the same values.

L.G.: I follow fashion brands, fashion people. I don’t follow anyone who just takes selfies. It doesn’t mean anything.

WWD: Who are your style icons?

L.G.: Diana Vreeland was so cool. Rihanna is really interesting; she is unique in her style and she can pull off everything.

WWD: Is style innate or learned?

L.G.: Both. The guts are natural born. Look at Rihanna, she was born with the balls to do what she wants. You can also educate yourself. The better you understand yourself, the better your personal sense of style. People who have a really unique style only pay attention to themselves, they don’t copy anybody else.

WWD: How do you choose what to share on social media?

L.G.: I only share things I think are interesting, things that mean something to me. I only want to post things that are beautiful and convey a good vibe. Trashy is so popular right now, but I will never post anything trashy.

WWD: How do you describe your style?

L.G.: Gypsy, student and philosopher. It’s who I am. I always feel the way you wear clothes is a language of the body, it’s how I communicate with people. I can’t talk to every person in the world, but I can use my look to talk to people. That’s why I love fashion, it’s a way of communicating.