How Influencers Can Minimize Their Environmental Impact, According to Julia and Sylvia Haghjoo

The two sisters are adamant that it’s possible to combine working as an influencer with a responsible approach to consumerism.

“I remember a group of influencers coming up to us after a show to ask if we had a car and could share a ride to the next venue,” said Julia Haghjoo, who at 26 is the youngest of the two sisters. “We said we didn’t have one and were planning to walk, but they were welcome to join. They looked at me like I was insane.”

Since becoming full-time influencers 10 years ago, choosing to dedicate their daily lives to photography and art direction for fashion and luxury brands, the Haghjoo sisters have felt a growing unease about the industry in which they’ve chosen to build their careers. Does being an influencer, aka promoting fashion products to a digital audience, still make sense amid growing ecological concerns and interrogations about the effects of consumerism?

It does, according to the sisters. But things need to seriously change — hence the walking.

“It makes no sense to take a car if the show venue is only 10 minutes away,” continued Sylvia, who is 29. “The same thing goes for couriers — why send a pick-up to a brand via car or motorbike when you can collect an item for a photo shoot yourself? It’s better for the environment and it’s better for yourself — you take a moment to breathe, exercise a little, take a break from the craziness.”

Julia and Sylvia Haghjoo, who have a combined following of more than 500,000 followers on their respective Instagram accounts, do not bill themselves as eco warriors. The girls, who are of Polish-Iranian descent, grew up in Hamburg, Germany, in an environment where sustainability was embraced as simply being part of common sense: Their parents went to the market, encouraged them to eat at home instead of grabbing takeout and taught them how to correctly recycle household waste.

“We’re just two girls from the German countryside who somehow made it to Paris working within the fashion industry,” said Sylvia Haghjoo. “We managed to create this platform that can reach people and influence the way they live their lives. It’s our responsibility to make sure this is done in the right way.”

Since moving to Paris from Hamburg this year, the Haghjoo sisters have established some strict personal and professional rules to limit the impact of their day job on the environment: no couriers, no drivers, no packaging.

“We moved to Paris to be closer to our clients,” said Sylvia Haghjoo, adding that the sisters work mainly with Paris-based brands Chanel and Hermès as well as Swiss watchmaker Jaeger-LeCoultre. They are also mulling over the possibility of solely working during Paris fashion weeks — ready-to-wear, men’s and couture — instead of traveling by plane to attend other fashion weeks.

On the day of the interview, Sylvia Haghjoo was carting an orange Hermès paper shopping bag filled with pieces lent out by the brand for an upcoming shoot.

“Whenever a brand lends us an item to shoot, I go and pick it up myself and refuse any packaging,” she explained. “I always hated receiving a package and wading through layers of plastic before getting to the item that was in it. Now the brands know us: When we turn up at the showroom, they just hand us a shopping bag with the sample in it. We shoot it, then return it in the same bag. It’s as simple as that.”

“Sometimes brands think that wrapping things up is a nice gesture, but we don’t need them to treat us well,” continued Julia. “It’s beautiful, but it’s a waste.”

• Advertisement Chloë Sevigny has collaborated with @chopard to design and launch a Green Carpet Collection bag with a sustainable story. Its made from responsibly sourced and traceable leather and recycled components. #ChopardAccessories #TheJourneyToSustainableLuxury ⚫️ anzeige

Getting brands to rethink their influencer policy has become an integral part of the girls’ day-to-day life.

“I really don’t appreciate it when brands send an item without asking you beforehand,” said Sylvia Haghjoo. “It’s a waste of money for them because in the end I’m not going to wear it. Also, not only do I prefer to be paid for my work, but according to German law we have to pay tax on any gifts, so we refuse them a lot.”

Wary of becoming “billboards for brands,” Julia and Sylvia Haghjoo have adopted a clear direction for their profession: Work with a handful of houses to build a long-lasting and loyal relationship that fits with their artistic universe instead of accepting one-shot collaborations with multiple luxury brands, and only choose to promote pieces that are truly timeless and not merely trend-led.

As a result, the influencers refuse to appear in head-to-toe looks and mix the pieces they are promoting with their own clothes, such as a simple pair of unbranded jeans. “Let’s be real — is it really possible for a young girl to afford a full Chanel look?” questioned Sylvia Haghjoo.

“Realistically, she might buy an accessory as an investment piece,” she continued. “So we mix a Chanel bag with our own wardrobe and don’t hesitate to post pictures wearing the same garment over and over — that’s real life! I wear my treasured Chanel bag daily and only have about five pairs of jeans, so it’s only natural that they keep popping up on my Instagram feed.”

Choosing to feature more of their personal clothes in their pictures does have a surprising downside. During Paris Fashion Week in September 2018, the sisters noticed that their outfits were getting less attention from street-style photographers.

“That season, I refused samples and wore all of my own clothes,” said Sylvia Haghjoo. “That’s when I realized how street style worked: Photographers were a lot less interested in us now that we weren’t wearing any new stuff. Of course I get it, they wanted to sell their pictures afterward so they favored people who were wearing a brand’s newest designs. But I feel like the business of influencing is going in the wrong direction: It’s not about personal style anymore, but about how many clothes you can borrow or get gifted. It’s not at all as inspiring.” 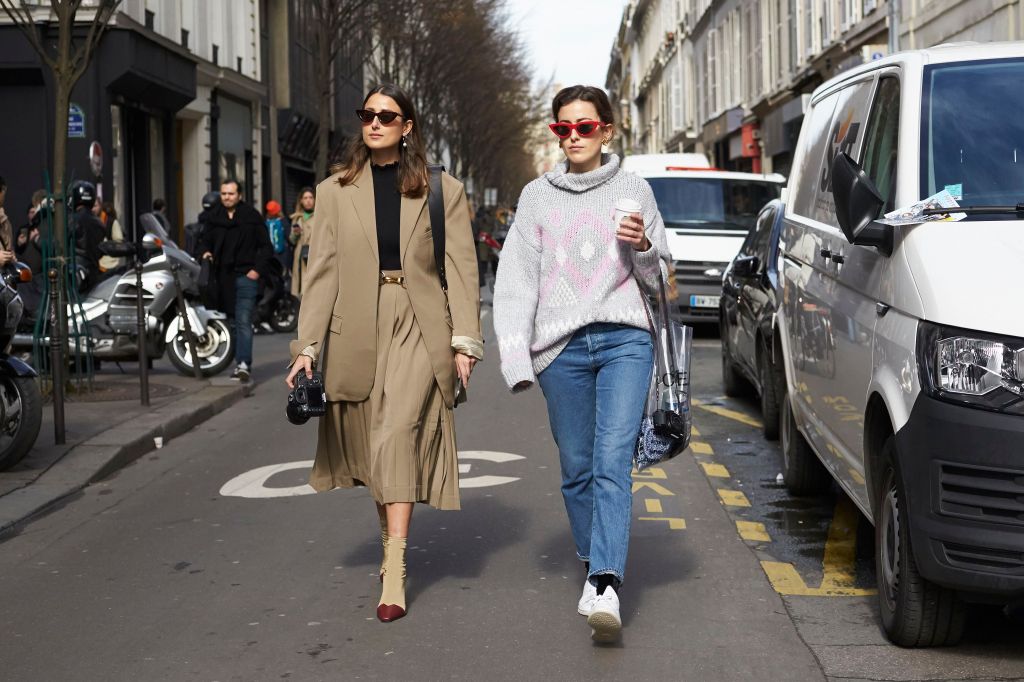 Inspiration is key to the Haghjoo sisters’ business model: In addition to their respective Instagram pages, they have just launched their own blog, Hug You, on which they post their pictures of fashion shows, latest art crushes, landscapes and portfolios.

“We want it to be as noncommercial as possible,” said Sylvia Haghjoo, who admitted that for her, Instagram was becoming too cluttered and all over the place, making her crave a more curated space for her pictures. “Of course there will still be advertorials, but we want it to mainly feature imagery and things that move us, as well as use it like a platform to use our voice.”

The pair gushed over their trip to Scotland with knitwear specialist Barrie, which is part of the Chanel Métiers d’Arts houses, where they were shown how the house deals with production mistakes: The atelier has a dedicated machine that can spin the item back into yarn in order to reuse it, instead of disposing of the garment.

“We would love to visit more ateliers and see how they create garments to better understand the products we work with,” said Julia. “It’s also our role to show where fashion comes from.”