Inside Amiri’s First Flagship on Rodeo Drive in Beverly Hills

"I wanted to create a humble space, not a flashy one," said the designer, hinting at how his approach differs from his European neighbors.

Mike Amiri in his flagship on Rodeo Drive.

Homegrown L.A. rock ‘n’ roll brand Amiri is staking its claim among the luxury titans with his first retail store.

“It was really important that it didn’t look like all the other Rodeo Drive stores,” said Mike Amiri of the 2,200-square-foot flagship. “I wanted to create a humble space, not a flashy one,” he added, offering some insight into how his six-year-old brand differs from his European neighbors that have mined L.A. for so much inspiration in recent years — Saint Laurent, Gucci and Louis Vuitton among them. 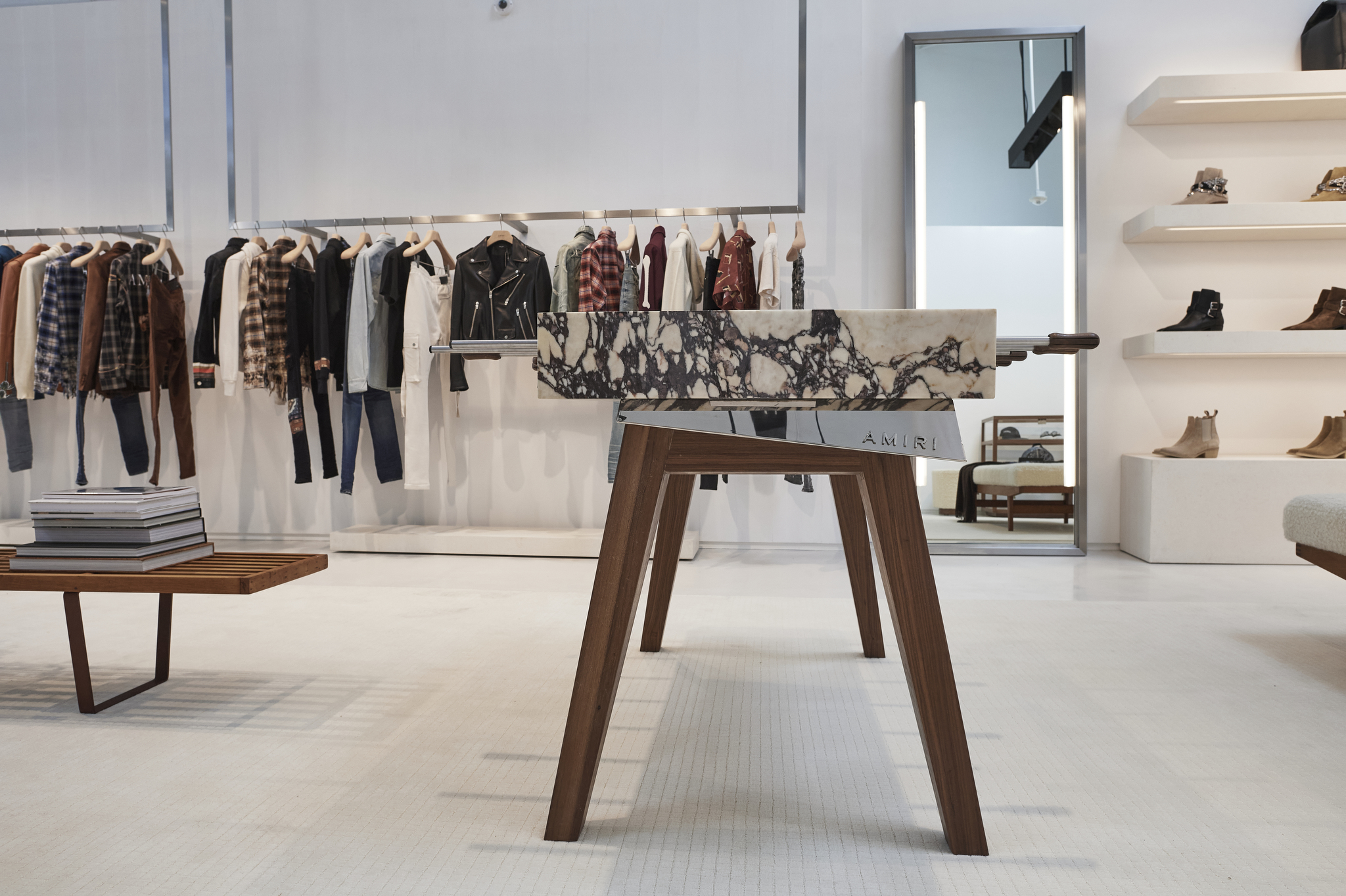 Amiri has his own European connections, of course; Italian entrepreneur Renzo Rosso and his OTB Holdings took a minority stake in the brand in June 2019. But for retail, “The natural place to open a first store was home,” explained the designer and chief executive officer of his firm, who went to school up the street at Beverly Hills High and sneaked into Sunset Strip music clubs before he was legal to watch Axl Rose and Steven Tyler, some of the same rock gods he dresses 25 years later in skinny jeans, shotgun-distressed cashmere and bandana-buckled boots.

No cookie-cutter marble palace here — Amiri’s off-white, gallery-like store is filled with L.A. light from floor to vaulted ceiling. He shopped for the midcentury modern furniture himself (“Pierre Jeanneret,” he said, motioning to two caned armchairs, “and that painting is by my favorite artist, Wes Lang, whose studio is five minutes away from our headquarters”). He also had a $26,000 Amiri branded foosball table installed for pickup games, and curated the playlist, a mix of rock, soul and rap. 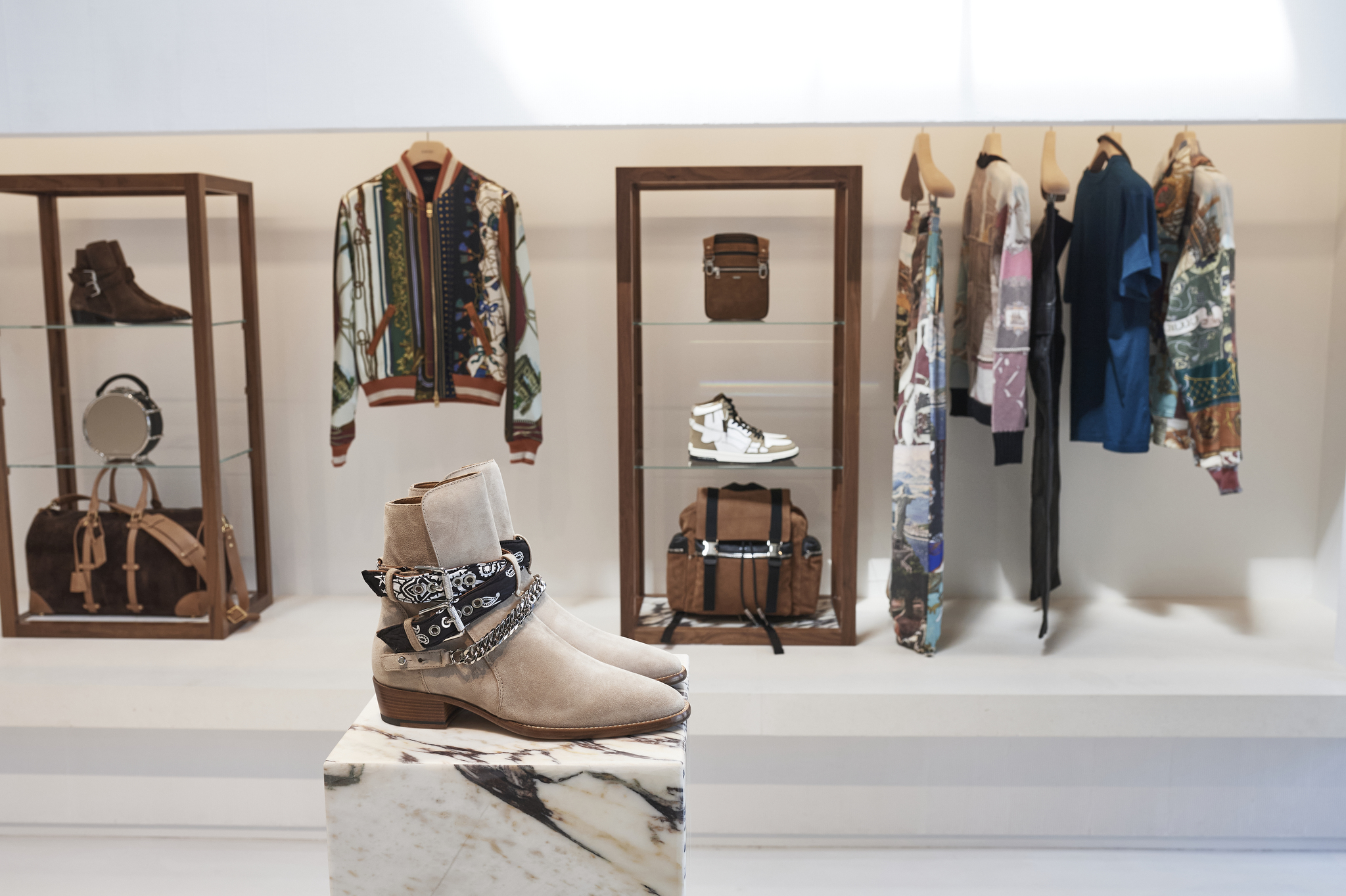 The merchandise spans from the $1,190 ripped and patched skinny jeans that have been Amiri’s bread and butter since Justin Bieber started wearing them in the beginning, to fall runway pieces, such as a $1,790 black bouclé tux jacket, and $1,590 silk print souvenir scarf print bomber inspired by a 1979 Henry Diltz photo of Keith Richards stepping off a private jet and his life on the road. There’s a small taste of the women’s collection that’s been worn by Gigi and Bella Hadid, and plenty of footwear and bags, including new small leather goods with Amiri’s signature bandana pattern, $350 to $500.

And in a true full-circle moment, he’s collaborated with the City of Beverly Hills, where his Iranian immigrant parents rented an apartment so Amiri could go to a better school, on a co-branded, special-edition hoodie ($790) and T-shirt ($350) to celebrate the opening of the store. 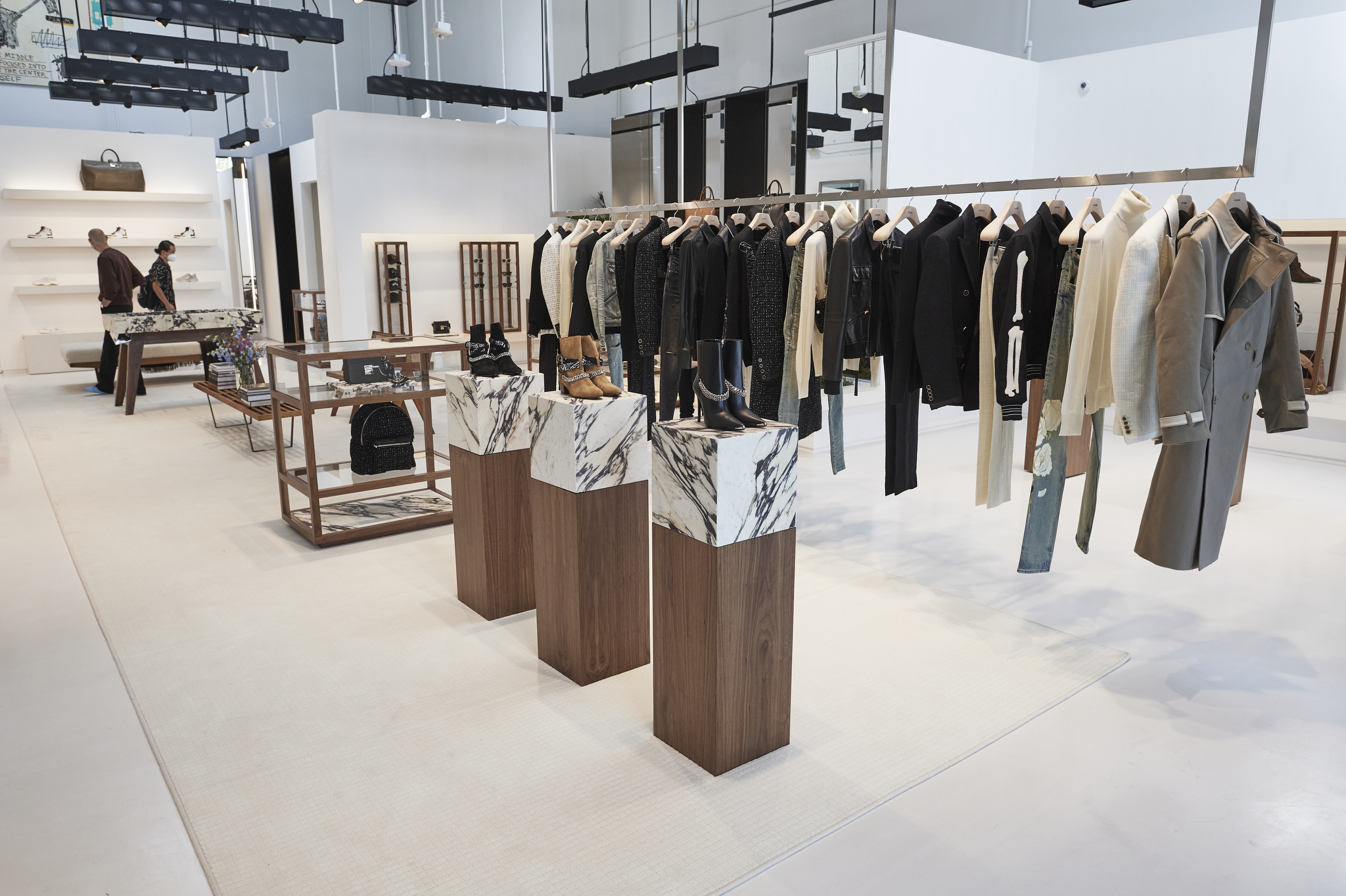 Originally slated for January, the flagship was delayed because of COVID-19. “It was important to make sure we did it right,” Amiri said, nodding to the heaviness of the moment. “And the brand’s foundational strength has always been not growing too fast…”

So no, he didn’t have any sleepless nights over signing a lease on Rodeo Drive and not being able to open, at least not that he will admit. “We have spent so much time protecting the brand that I knew the demand was strong. For every one Amiri account we’ve opened, we’ve turned down seven, and it’s created a market of scarcity where there’s a really high demand still. Opening this store, I knew we had a client that loved the brand and would welcome the opportunity to shop.” (Amiri’s most famous fans include Kendrick Lamar, Jay-Z, Kyle Kuzma, Michael B. Jordan and many more.) 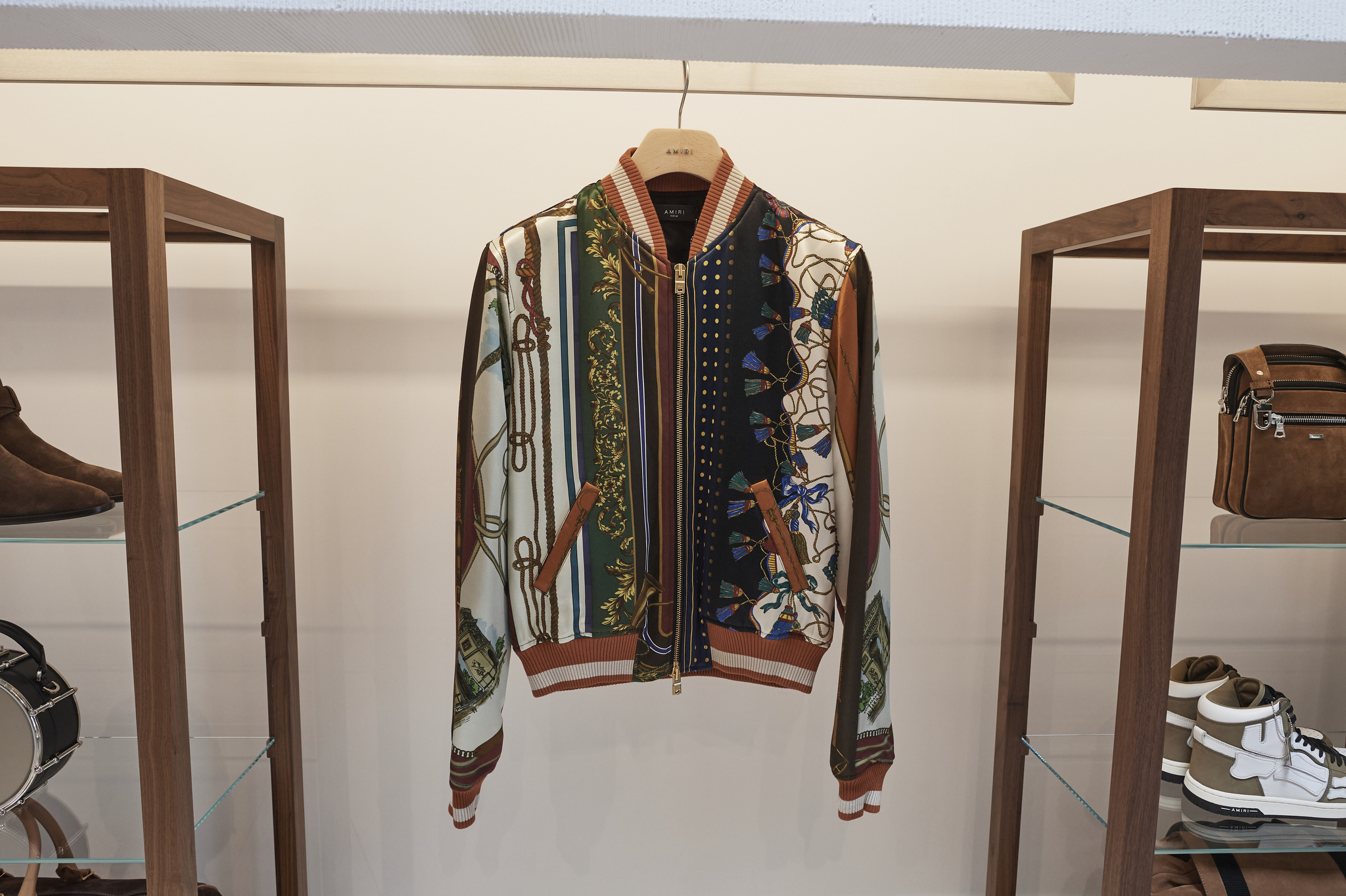 He acknowledged the headwinds that have bankrupted several more established brands already this year, including John Varvatos. But Amiri has kept things tight enough to avoid having excess inventory. “We control our production, 80 percent is in L.A., everything is vertical, and there are very few things out of our hands. That’s helped us to not be as affected as other brands,” said the designer, whose headquarters in downtown L.A. is still not fully reopened.

What has he been selling? Amiri hoodies, sure, but also footwear, which has grown to 15 percent of the business. Machine Gun Kelly was recently photographed wearing the brand’s Skel-Top leather high-tops with a knee-length 1017 Alyx 9SM dress. The $650 shoe sold out online its first day, Amiri said, but some were held back for the Rodeo Drive opening.

“It’s becoming a bigger part of our business; we originally had a few styles of the boots, but now sneakers have become strong for us,” said Amiri, noting that the brand now has six styles of sneakers, and some are reselling for two to three times retail. “It’s really incredible because in this market, you usually need these massive collaborations to launch and build that hype, and we’ve been able to create that category with design and following our own style, the funny and fun things we’ve been known for, and reimagining something classic and putting a hook to it.” (The skeleton motif is inspired by his own school-age doodles on his sneakers.)

Like it has for many, the pause in the calendar has given him time to step back and make a few changes, starting with the decision to skip showing spring 2021 in Paris in July. He’ll show it digitally in mid-October instead. “I’ve always pondered showing a collection closer to the time when it ships, because there’s always that five-month gap from the Paris show to when the clothes are in store,” he explained. He’s also spinning women’s out on its own, showing the next collection for pre-fall. “It deserves to have its own stage,” he said. 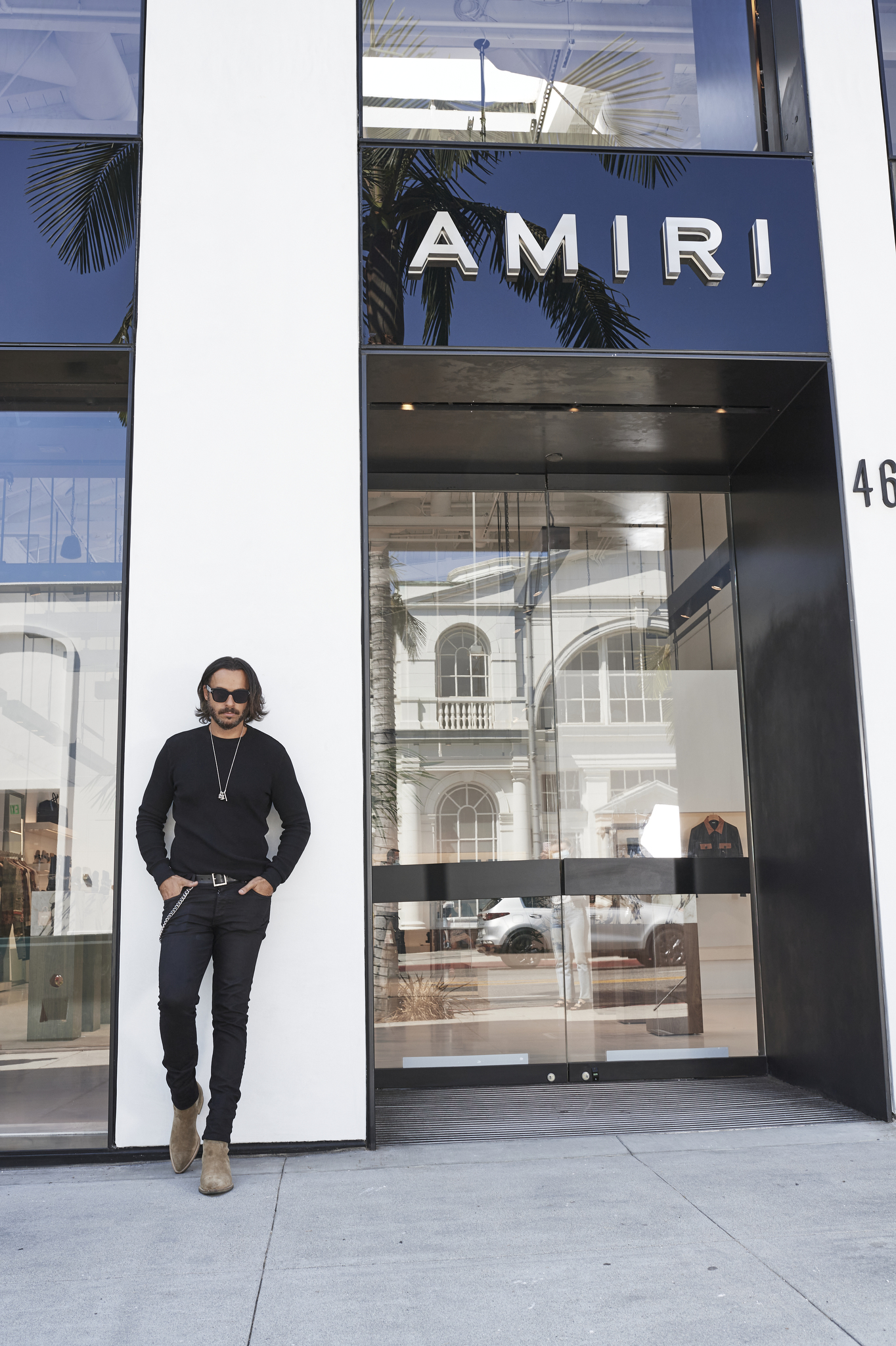 “My [fall] collection was inspired by the idea of traveling all around the world and gathering treasures along the way. Spring will be about reconnecting with home, and what does this rock star look like when he’s back and he’s more select with his tastes?”

Amiri can relate; grounded like everyone else, he has been doing some reconnecting of his own at home during quarantine — talking more to friends like L.A. designer Jerry Lorenzo, who broke with the Paris calendar and released his own collection in August. “It’s nice to come together when we all have a common adversity.”

He’s also still talking to Rosso once a week. “He likes to look forward…it’s nice to have someone who has built something so big saying encouraging things now,” said Amiri, who is in the long game like his mentor. “There’s something to be said for understanding the moment — even on social media we’ve taken a step back when there are things going on that are much more important than fashion.”