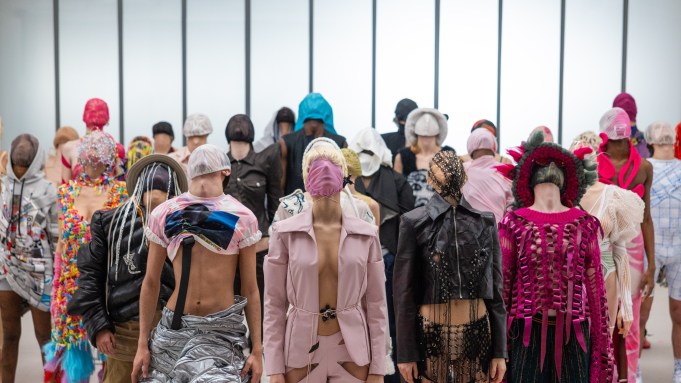 PARIS — Opening Paris Fashion Week for the second time, the Institut Français de la Mode’s MA graduate show came with a change: the traditional divide between women’s and men’s fashion design has been dropped from the fashion course description.

“In general, [they] abolish boundaries, be they gender or those between physical and digital. For us, it’s a talking point, but to them, it goes beyond negating differences — it’s a non-topic. [This generation] abolishes any barriers they consider an obstacle to creative expression,” added Romatet, praising the “vision, this identity they create through garments and in which gender isn’t necessarily a relevant distinction.”

Masks, featured with most looks, further blurred the features, leaving body shapes and attitudes to do the talking. Romatet explained students had been asked to “consider the head as an integral part of [the silhouette].”

Showcased in a film that blended the reality of physical looks with digitally scanned versions and imaginary landscapes, they contributed to an eerie escapade that segued into the work of the class’ image-making students.

Other standouts from this year’s lineup included Lou Comte’s knitwear that followed rather than defined the body’s curves; the designs of Claire Barreau, who likewise designed for the body as-is, rather than use garments as a way to shape it; Maria Siqueira, who mined her Portuguese heritage for voluminous looks that blended traditional silhouettes and new techniques like flexible 3D-printed panels, and Ibrahima Gueye, who transcribed male-oriented rituals of his homeland of Senegal into a wardrobe for women.