Blondes not only have more fun, they're rich, too. 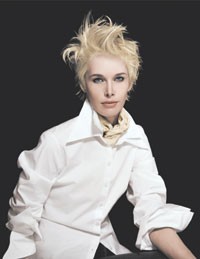 NEW YORK — Blondes not only have more fun, they’re rich, too.

Speaking at the Intercoiffure America-Canada press breakfast Monday, the organization’s North American creative director and founder of Maximus Spa/Salon, Richard Calcasola, declared, “Being a blonde is a luxury. It means a woman has the time and the money to keep up the look.” He added that, at one time or another, nearly every woman has secretly wished for blonde locks because, in his view, “blondes get all the attention.”

To be fair to the brunettes, red heads and — gasp! — dirty blondes in attendance, Calcasola noted that strong hairstyles need a strong hair color, no matter what the shade, just so long as it’s bold.

He commented that it’s perfectly acceptable not to have a “believable” hair color, and noted that he prefers ebony and vibrant red over wishy-washy brown hues.

During the event, Calcasola, who also serves as creative director of the organization’s global parent company, Intercoiffure Mondial, presented a photo shoot of 2006 hair trends.

To illustrate the trends, the hairstylist focused on a model with short, pale blonde locks, and showed her hair styled five different ways: casual “bed hair,” a sleek and combed-back look, gently tousled hair, an unconventional updo and a dramatic couture style.

Without a must-have style, such as The Rachel cut of the mid-Nineties, as a guide, Calcasola said that the key to next year’s looks will be individuality and attitude.

“Hair must make a statement,” he said, adding that even runway looks are often understated. However, he noted: “We know that fashion takes the lead, and we follow that lead.”

Intercoiffure added a breakfast to this year’s Fall 2005 Atelier schedule to reintroduce the organization as an authority when it comes to hair trends and the salon industry. Intercoiffure America-Canada, the association for hairdressers and the salon industry, includes some 400 members and 2,200 branch salons. To be considered for membership, candidates must be a licensed hairdresser and own a salon that generates annual sales of more than $1 million.

For Calcasola, benefits of membership range from small favors, such as suggesting a photographer for a photo shoot, to financial advice. The organization will expand its reach to Mexico next year.