Intermezzo Reels Them In at the Piers

Contemporary and denim companies had a strong showing at the Intermezzo Collections, using the show to highlight additions to their lines.

By Lauren DeCarlo on May 5, 2005
View Slideshow 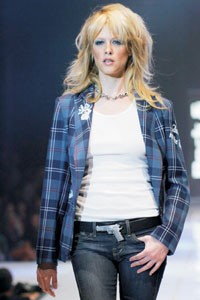 NEW YORK — Despite a concentration on accessories exhibitors, contemporary and denim companies had a strong showing at the Intermezzo Collections on Piers 90, 92, and 94 from Sunday through Tuesday and were using the three-day show to highlight additions to their fall and holiday lines.

ENK International, producer of the show, said 627 exhibitors were on hand at the Piers, down 70 from last May’s show which counted 697 exhibitors. The exact number of retailers in attendance hadn’t been calculated yet, but a show spokesman said the figure should be on par with last year’s figure which was roughly 7,500.

The 10-year-old contemporary line Helen Wang launched eveningwear at Intermezzo. “We do every ENK show in New York and this time around, we’ve placed a decent amount of orders,” said Cara Borke, sales account executive for the collection, which wholesales between $110 and $220. The eveningwear collection featured pleated poly-charmeuse dresses and ballskirts. The collection is sold at Neiman Marcus and specialty boutiques across the U.S.

Surprisingly, Borke noticed that the buyers visiting her booth were primarily from the Northeast. “We haven’t seen one person from the West Coast,” she said. Helen Wang’s sales from this year’s Intermezzo show were still up 20 percent from last May’s exhibition. The company is expecting its wholesale volume for 2005 to reach $4 million.

Michael Mastriano, owner of the Tango specialty boutique in Brooklyn, said the timing of the show makes it a bit less appealing.

“People seem to have bought a lot at the last show and they’re already bought up. I don’t know how much merchandise you can continue to buy,” he said, noting concerns with the economy, specifically rising oil prices. “And the weather doesn’t help. With the cool weather, it still feels like fall.”

Tango’s business is up 15 percent from this time last year, he said, thanks in part to burgeoning sales of belts, jewelry and handbags. “Kooba is really great. It’s my best-selling line,” he said, referring to the handbag collection.

The Los Angeles-based denim collection Rock & Republic was exhibiting additions to its Victoria Beckham label, including a new crown logo for the back pocket. The denim company also launched a kids’ wear line and a collection of blazers in fabrics such as wool and cashmere wholesaling between $80 and $150. Also on hand were styles resulting from Rock & Republic’s recent collaboration with Lycra spandex.

“We really have so much to choose from. We’re looking to expand into a lifestyle brand,” said Andrea Bernholtz, managing partner of Rock & Republic. “We are really selective about who we’ve sold to and have actually had to say ‘no’ to many buyers.”

Bernholtz said Rock & Republic is not looking to open new doors for the next three months, but will increase its business in existing stores.

“Our volume is up and customers seem to be writing deeper,” she said. “The sales number we finished with last year is what we’re currently shipping each month.”