Chinese designer Daoyuan Ding scooped up the ITS Award for best collection.

The 17th edition of the event aimed at promoting the next generation of designers and offering them financial support, as well as publicity, named its winners on Friday night here asking the more than 800 applicants to develop “sincerely true” collections, sticking to their own vision.

The contest returned last year after a one-year hiatus and the newly found enthusiasm pushed Barbara Franchin, founder and director of the competition, to raise the bar higher.

On Friday night, an international jury gathered at the Magazzino 42 venue, a former warehouse on one of the Italian city’s many piers, to evaluate the works of the 22 finalists. The projects included fashion, accessories and jewelry. Collections were showcased with a runway show, while the other projects were displayed through a dedicated exhibition.

Retracing the history of ITS, Franchin noted young talents have changed over the years in terms of age, origin and approach to the industry. To wit, half of the finalists this year came from the Asia-Pacific region and Franchin said the talents are “much more self-conscious today. They are more focused and straightforward as they look for their identity, without necessarily aiming to stage a runway show as a starting point.”

OTB’s founder and chairman Renzo Rosso was one of the earliest supporters of the contest when it was established in 2001, first with Diesel and then with the brand’s parent company. The executive noted “it’s part of my DNA to nurture talent; Diesel and I have grown up thanks to the young people working at the company, I owe them my success.

“I see unspoiled creativity in the young generations,” Rosso explained, adding a number of designers coming from the talent scouting platforms that OTB supports, including Andam, ITS and Milano Moda Graduate, have ended up working for the group’s labels.

Bringing on board young and fresh creativity has been pivotal to Diesel’s two-year restructuring phase, Rosso noted. “I’m back in charge and full control, I’ve dramatically changed the structure, freshening up the product catering to Gen Z and Millennials, restructuring the management and implementing a more modern approach to communication, with a 24-hour online presence to constantly address your customers.” The strategy is paying off, he added.

“The Italian government should do more to support the young generations within fashion as the industry accounts for a great portion of the gross domestic product. Entrepreneurs have been left alone while if we had support in education and business, we could do much more,” he offered.

The Italian fashion chamber’s chairman and president Carlo Capasa agreed. “Fashion is an open system, it’s inclusive regardless of race, sex, politics and social status. Too often the institutions are afraid to take a stance to safeguard it because this industry is about luxury and it addresses customers with high spending capacity,” Capasa said. “But what we forget is that fashion is made by Italians, by the families.”

Other members of the jury included Miren Arzalluz, the director of Paris’ Palais Galliera fashion museum; Y/Project’s creative director Glenn Martens; Raffaello Napoleone, chief executive officer of Pitti Immagine, and Aitor Throup, the Argentinian-British designer and artist and a former ITS finalist in 2005 and 2015, among other jurors.

Chinese designer Daoyuan Ding scooped up the ITS Award, a cash prize of 15,000 euros and a 12-month mentorship backed by Pitti Immagine, which will enable him to present the collection at the fair’s January edition. The designer also took home the Tomorrow Entrepreneurial Creativity Award with a men’s collection focused on tailoring in which unusual proportions came via wide-leg, high-waisted, often cropped suit pants paired with elongated jackets nipped at the waist. Drawing inspiration from the surrealist worlds created by artists and filmmakers such as René Magritte and David Lynch, Ding splashed his tailored pieces with camouflage designs blending together different traditional men’s wear patterns, such as houndstooth, checks and pied-de-poule. Strutting down the runway to the beat of a disturbing yet emotional soundtrack, models wore elongated cloche hats, their faces covered by offcuts of black fabrics. The collection was well executed and managed to balance a subversive approach to tailoring without giving up marketability. 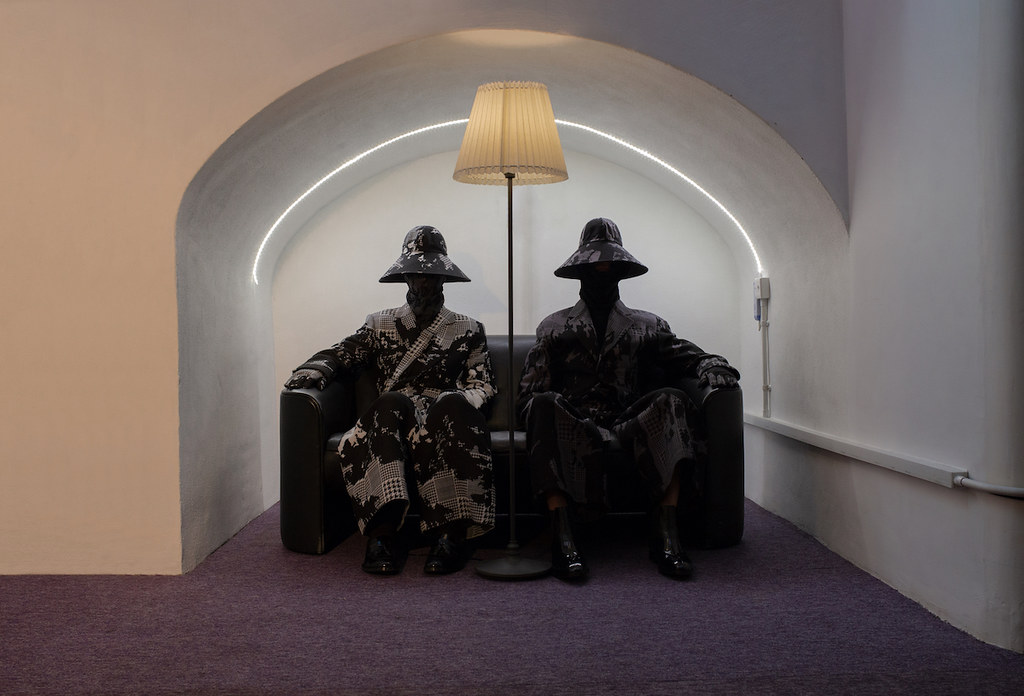 Looks from the the ITS Award winning collection by Daoyuan Ding.  Courtesy Photo.

In handing out the award, Franchin said Ding wanted to quit the contest a month before the ceremony. A similar experience was shared by one of the jury members: As Throup recalled “when I won the [ITS] award I had zero intention of becoming a fashion designer,” he said, adding his plans included writing a graphic novel about Hurricane Katrina in 2005, which devastated New Orleans. “It’s thanks to ITS that I had to push myself to do a second collection and to really prove my voice and point of view as a designer…and it was because I proved it to myself with that second collection that I got a hunger for it and started to think I could really have something unique to say in this world,” he explained.

“Fashion is still a mystery, it’s a bit like a fairy tale. There are no gold rules to follow,” Martens said. “At the end of the day you have to just stay true to yourself and keep on pushing it. As long as you keep your integrity and are aware of what’s happening around you, you succeed without getting lost in the hype,” the Y/Project creative director noted.

Tuning in with fashion’s increasing commitment to sustainability, ITS dedicated for the first time a special prize for the project that managed to implement a green message. “We started reflecting on sustainability, these young designers obviously don’t have the right tools, they cannot use traceable fabrics,” Franchin said. “We wanted to hand this prize to support the idea that they can potentially develop sustainable collections with the right assets.”

“It’s important to address this topic as today’s customers are attentive and you risk losing market shares if you don’t align,” echoed Rosso, praising Franchin’s intuition and stressing that in addition to green products, OTB has been focusing on welfare initiatives for its employees.

American-born Corrina Goutos won the ITS Sustainability Award — consisting of a cash prize of 3,000 euros — with a collection of art-come-jewelry pieces created to represent fossils and living forms she imagined populating a dystopian future.

“These talents are the future generation of the fashion industry and they know this is the second biggest polluting industry in the world,” Martens said. “So many kids think about it…creatively they are busy with it.”  He added that being at the helm of a luxury brand he’s committed to use “good certified materials” and make items that are supposed to last, along with growing the brand sustainably.

The OTB Award, given by Rosso, was bestowed on Australian fashion designer Annaliese Griffith-Jones, who upon moving from her native country to New York started reflecting on the value played by memory and nostalgia. Griffith-Jones’ whimsical collection featured glossy patent materials splashed with tiles and floral prints that she managed to craft for a range of Fifties-inspired apron dresses. The OTB prize consists of 10,000 euros and the chance to intern at one of the group’s brands.

The Diesel Award — assigned to the designer who had created a denim outfit reinterpreting the collection’s concept in the most creative way — was given to Swiss designer Rafael Kouto, who won a six-month internship at the OTB-owned label. The 29-year-old designer scooped up the Lotto Sport Award as well, winning a three-month internship at the Italian sportswear company to develop a small capsule collection of apparel or footwear.

The CNMI Award consisting of a prize of 5,000 euros, backed by the institution’s Fashion Trust, was given to Moon Hussain for her gender bending collection in which traditional men’s outfits were twisted and repurposed for the female body. The designer also received the Coin Excelsior Award.

“I believe that CNMI is doing a lot for the younger generations, promoting networking activities in addition to providing them with visibility, but the rest is up to these kids,” Capasa said. “Creativity is not enough, they need balance and have to leverage the right competences in terms of marketing, financials and management. The market is highly competitive today, it’s not always easy to stand out,” he said.

Earlier this year, as reported, ITS also revealed it had found in Fondazione CRTrieste a partner offering a 7,000-square-foot space to house the organization’s headquarters and offices, as well as the ITS Creative Archive, which features outfits, accessories and talents’ portfolios gathered from past editions.

The space, named ITS Arcademy, will be fully unveiled in 2021 marking the 20th anniversary of the talent scouter. Franchin shared her vision for the space, which she said will be noisy, with a tree taking center stage, video installations, workshop rooms and one exhibition to be mounted each year. “I imagine Italians, foreigners and the people from Trieste to be creative together,” she offered, stressing her commitment is to build “a pop place, for everybody.” Former finalists, winners and jurors will also be invited to host workshops, and educational and training activities dedicated to fashion students.